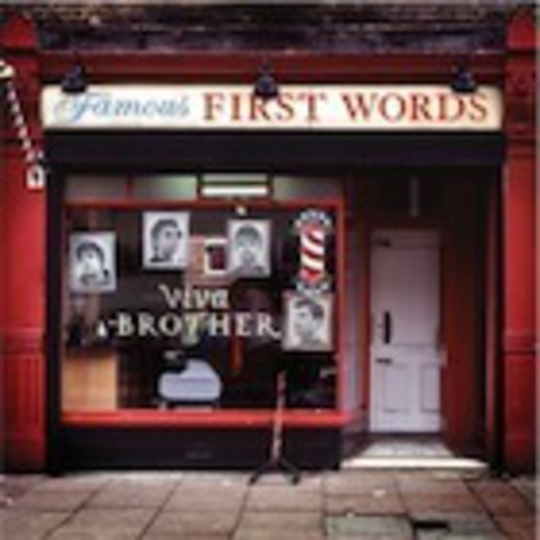 For the past couple of years, many obituaries have been written for guitar-orientated bands in mainstream UK music. I emphasise the word mainstream because a quick rummage through the blogosphere on sites like this would suggest the homegrown underground scene - whether it be guitar-driven or otherwise - is as healthy as it's ever been these past 40 years. Lurking around the capital are excellent offerings by The Horrors and Male Bonding - both of whom have churned out two impressive records in the space of two years - will immediately slap you around the face. Head up the M1 and Leeds can boast an unparalleled wealth of talent ranging from Pulled Apart By Horses and Dinosaur Pile-Up's punk-ravaged metal to Spectrals' oblique retro-inspired pop and beyond. Head even further north and you'll encounter The Chapman Family wrestling with their conscience and microphone leads, Wild Beasts' Cumbrian eccentricity, The Twilight Sad shattering eardrums and We Were Promised Jetpacks about to release one of 2011's real gems. Even my neck of the woods in the East Midlands is currently at its most vibrant thanks to the impending progress of Dog Is Dead, Spotlight Kid and Swimming, with a host of others ready to break out in their trail. I could go on for hours co-ordinating each and every crevice of the British Isles while unearthing a plethora of other like-minded souls but I won't, as ultimately making lists is something to do before you go supermarket shopping. However, one thing that links all of the aforementioned is that their output is created predominantly using the guitar. Which not only renders the "Is guitar music dead?" argument null and void, but also begs me to ask a further question; what the hell was going through the A&R department's minds at Geffen Records in October of last year?

That was when some record executive decided that (allegedly) half-a-million pounds of the company's money should be invested in 'Slough's finest' (their words not mine), the then simply monikered Brother. Exactly what potential the label's talent scouts saw here - and let's not forget this is the corporation responsible for financing such groundbreaking records as Reign In Blood, Goo, Nevermind and In Utero among many, many others - only they can answer. As misguided as a desperate football manager staring relegation in the face making panic buys on the final day of the January transfer window, Geffen's belief that this lot represent the future of UK guitar music defies comprehension.

Marketed as the missing link between Oasis and Blur's era-defining stand-off at the height of Britpop and the scuzzy posturing of The Libertines, we could also talk at length about Brother's past lives until the cows come home, but as that's also been discussed at length elsewhere it would prove little more than a fruitless retread. Indeed, that's probably something that shouldn't be held against this band; people's tastes change, new ideas developed. After all, would Radiohead still be held in the same high esteem if they'd spent their first four years together churning out replicated versions of Pablo Honey? Precisely. No, what's more alarming is that Brother's (we'll get to the 'Viva' bit soon) 'development' feels more like a regression than a genuine attempt at artistic growth. Whereas the musical style they were peddling at the outset owed more to the sounds of downtown New Jersey circa 2004, the 2010 variation culminating in Geffen's costly endorsement became redundant at one minute past midnight on 22nd August 1997, precisely 24 hours after the world had heard Be Here Now switch Britpop's life support machine off at the mains.

So, as everyone from the media to radio pluggers to the record buying public takes turns in deciding who to point the finger at for inflicting these gobshites on the world in the first place, it really is difficult to see beyond the record label for such an ill-advised, surely finance-driven business decision. Sure, the band themselves come across as being a little desperate for success, but it's hardly their fault they've come this far.

Of course there will be some who'll bemoan the fact Brother seemed cursed from the start. They'll talk about the decline in record sales as an excuse for none of their three singles to date reaching the Top 40, blame the music press for commissioning a wave of negative publicity from the outset and point to the fact that even Australian bands with a fondness for New Model Army and The Levellers claimed the band's name some twenty years previous, hence the newly christened Viva Brother. However, for the industry to prosper, it's also in everyone's best interests for an expensive failure like this to occur. After all, one can barely imagine the other dross that may have been signed up by Geffen's rivals had everything gone to plan? Unless by some unexplainable quirk of fate VB disappear for two years only to return and "do a Horrors", their place in rock's Good Ship Oblivion is already laid out and waiting.

There isn't really an awful lot else to say. Famous First Words might not be the worst record you'll hear this year, but it's certainly one of the most pointless. Derivative to the point of being permanently stuck in reverse gear, it's a record that oozes predictability and little besides. In fact, rather than me waffle on about how the breakdown in 'Darling Buds Of May' steals directly from 'Supersonic' or the way 'Electric Daydream' sounds like a pastiche of 'Go Let It Out' - itself a poorly constructed copy of its creators' former glories, have a listen for yourselves if you're really that intrigued. I dare you...