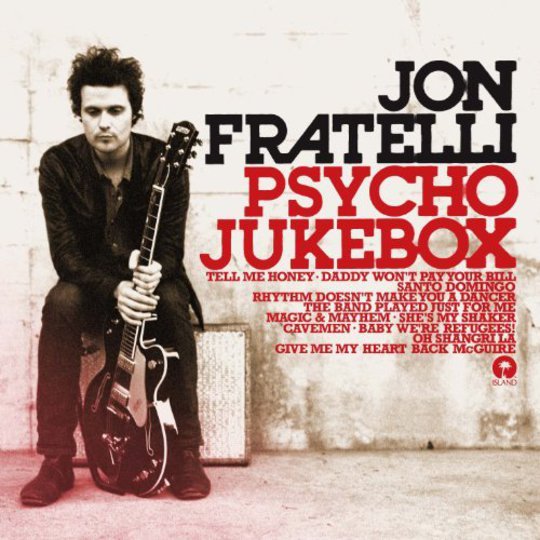 Hold the vocoder. Just for a second, please. Electronic music is getting a little smug at the moment, the popularity of DJs and producers gradually squeezing bands and musicians out of the mainstream altogether. Jon Fratelli, briefly one of the most notable members of the leading party’s opposition - Team Indie - aims fire at synthesized music with his first solo full-length release, Psycho Jukebox.

From the opening track of this record, it is clear that The Fratellis’ figurehead has transposed the mid-Noughties band’s catchy hooks and skipping riffs through to his solo material. ‘Tell Me Honey’ is a straightforward, jingly-jangly guitar pop ditty. It is easy to picture played over a cookery programme’s closing montage à la Naked Chef: Jamie Oliver scrambles around his self-branded kitchen, laying the dinner table and laughing with friends, chiming wine glasses together merrily. The song sets a scene for the fun frolic of a record that follows.

Psycho Jukebox is lyrically unchallenging. Single ‘Baby We’re Refugees’ philosophises “1+1 don’t equal an answer/ Rhythm doesn’t make you a dancer,” with fleeting disregard to grammatical rule, whilst wannabe crowd pleaser ‘She’s My Shaker’ consists of the Any Man’s “La la la la la-a/ La la la la” Hook. Jump-up-and-downer ‘The Band Play Just For Me’ has a messily varied and, at times, uncomfortably impatient rhythm. The eager last minute is the equivalent of someone desperate for a pee, remaining silently anguished until they reach delirium. In Fratelli’s case, once said frenzied heights are reached he spouts out such lyrical nonsense as, “Sex was a curse sent from above.” The very questionable keyboard/organ-led intro of ‘Magic & Mayhem’ is also worth a mention. Yet within the same song, the bridge with integrated triplet pattern from 2:23 to 2:31 is a perfect pop motif. There are small sparks of hope buried within Psycho Jukebox, but not too many. After a few listens, the all-too familiar chord sequences and grating hooks get a bit much; I find myself asking for someone to pass the 'Chelsea Dagger'.

Jon Fratelli’s solo effort is a straightforward pop rock album; his musicality is greatly professional and this record is of course very cleanly written. We can rely on Fratelli’s well-informed guitar songs to ensure that good old-fashioned rock'n'roll stays tiptoeing on the tightrope above the radar. Just.

Nouveau electropop stole indie rock’s limelight; Fratelli is attacking from a disadvantaged position - Psycho Jukebox is just, well, a little bit boring. It is wholly accessible, but its M&S rock elements all blur together very easily into a nondescript camouflage until you can’t help but focus on the slightly naff elements. Jon, you could have done better.