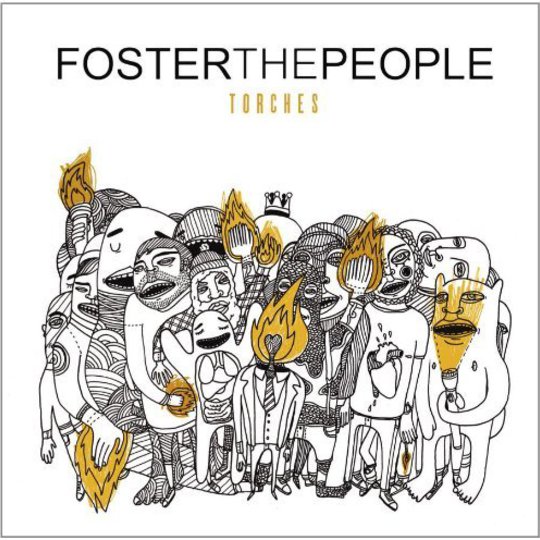 Mark Foster, affable front-man and namesake of California's Foster the People, has recently been enjoying an ascent from destitute jingle writer to populist one-to-watch choice that’s been nothing short of remarkable.

Moving to LA from Cleveland when he was just 18 and composing music for TV ads to make ends meet, Foster eventually put a band together, with Mark Pontius (drums) and Cubbie Fink (bass) in 2009, as an outlet to deal with the incessant melodies and choruses rattling around in his head. Then over two days in his dingy Venice Beach flat, he bashed out a catchy little tune about a teenager fantasizing about a killing spree, not knowing it would go on to change his life.

The track in question - ‘Pumped Up Kicks’ - has been bouncing about on radio for months. And despite its palpable quivering at the chops eagerness to please, you can't fault its simplistic genius.

The laid-back, slacker-thrummed bassline, those sweetly muffled vocals, that heavenly catchy chorus hook and Peter, John and Bjorn-esque whistling have all played their part in cementing its status as this year's guaranteed 'alternative' summer hit.

But it's a dangerous position to be in when all your hype, hope and promise hangs on one track - no matter how good it is. And when you're being quoted as protesting: 'we're a band, not just one song' before your debut single and album have even dropped, it can't be a good sign.

But Foster shouldn't complain too much. After all, the rabid popularity of ‘Pumped Up Kicks’ will undoubtedly be what draws listeners to his debut album, albeit hoping to hear nine other tracks of similar brilliance. It probably won't surprise you to learn that ‘Pumped Up Kicks’ is by far the best thing here, with the remainder of Torches veering between feel-good summer soul and disposable electro-tinged pop. But there are other gems to be found. With its dewy-eyed Passion Pit-esque vocals and smudged, summer-drenched synth lines there’s definite strains of ‘Electric Feel’ at play on ‘Helena Beat’ - obviously what has prompted so many people to declare the band 'the new MGMT'.

Before that, opener ‘Call It What You Like’ is a clean-scrubbed and fresh-faced piece of gospel-tinged piece of pop that eventually explodes in a pleasing hipstamatic mushroom cloud of yelps, rave-piano scales and echoing haze. Next up, ‘Colour On the Walls (Don’t Stop)’ starts with some very Blur-esque strummings, leading into infectious, sugary verses and a bubblegum chorus that (just!) leans on the palatable side of digestible.

However, three tracks in and already the good mannered and well-intentioned approach of Torches is beginning to wear. ‘I Would Do Anything For You’ is as wet as its title suggests, and although ‘Houdini’ is playful with blissful keys and a snappy clap-trap beat, it’s the first time Foster’s smudged vocals become less ‘the voice of summer’ and begin to plummet worryingly into Adam Levine territory. By the time we get to the MOR puppyish ‘Miss You’, the band have horrifically morphed, in sound and spirit, into Maroon 5 version 2.0. Worse still is their self-confessed manifesto, inherent in their name and solidified by their frontman’s claims of wanting to write about humanity and literally 'nurture the people'. At no point on Torches is there any sense of edge, of losing control.

Clearly, the first half of Torches is its collective zenith, and although things pick up towards the end of the album by the strategically placed ‘Pumped Up Kicks’, you can’t shake the feeling that Foster has simply stretched the party vibe over as many songs as he can before the momentum runs out.

One thing you can’t fault though, is the underlying sense of joy that permeates every nook and cranny of the album… even if it is more cookie-cutter than Foster the People would probably ever want to admit.