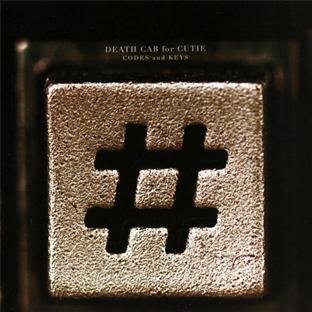 An album so doggedly middling that it barely even strives to make an impression.»

one of indie rock's greatest success stories and multi grammy-nominated quartet, death cab for cutie release their hugely anticipated new album, 'codes and keys'. by their seventh studio album, many bands are running out of creative steam and original ideas. but in the case of death cab for cutie, nothing could be further from the truth. 'codes and keys' is singular in the quartet's catalog when it comes to sonic exploration and lyrical ambition. if anything, the band has never sounded more excited to experiment with textures, words, sounds and even the process of recording itself. 'codes and keys' immediately makes a statement with the first song, 'home is a fire.' staticky percussion chatters beneath several layers of bustling rhythms and echoing, spooky vocals. the lush instrumentation continues with the title track, on which strings from san francisco's magik*magik orchestra sway in time with oompah drums and graceful vaudeville piano. the orchestra also adds lightness to 'stay young, go dancing,' an upbeat album-ender that's as fanciful as randy newman's pixar movie contributions. elsewhere, the new order-like 'doors unlocked and open' has a dense, dark bassline, while the centerpiece 'unobstructed views' meshes floating-in-space electronic noises with angelic twinkling and strident piano; the effect is a heavenly explosions in the sky. 'st peter's cathedral' begins with gibbard singing a cappella, and gradually blooms into a mournful but somehow joyous song filled with wordless, bubbly harmonies and cinematic synthesized drone.
description from www.roughtrade.com