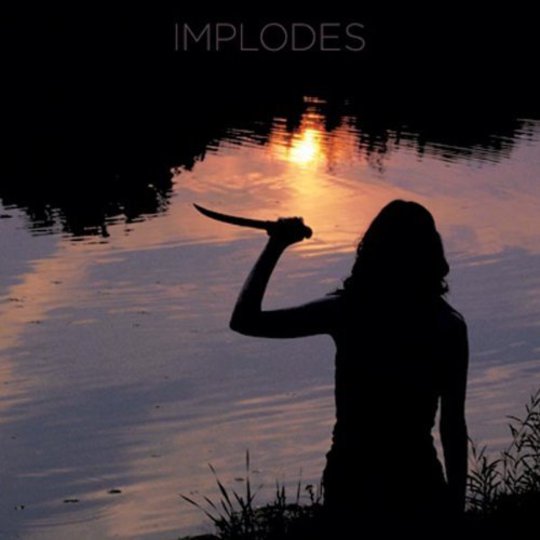 Although a they're a group with tendency for sonic and melodic obfuscation, the very band name Implodes, along with title and artwork of Black Earth are clear indications of what to expect from this Chicago four-piece. If that cover with the silhouetted female figure brandishing a knife as if readying herself for the undertaking of a ritual slaughter wasn't sinister enough, then there is also the group's own description of the actual place they call 'Black Earth' as “a haunted and magical place.”

It's interesting to read the group's own words on the matter, as words are often heard on Black Earth, but are rarely possible to discern, enveloped in the cavernous torrents of noise. While it's often brutal, Black Earth is certainly also 'magical' and the name couldn't be more appropriate. They suck you in rather than just blowing you away. To paraphrase Frazier Mohawk, the producer of Nico's Marble Index, Black Earth isn't a record you listen to, it's a hole you fall into. That's not to say that it is as quite as unique as the hypnotic austerity of Nico's 1969 classic, because Black Earth certainly has its antecedents in a number of noisily ambient or drone artists, from Swans to Earth and, at their most driven and direct, even the Jesus and Mary Chain. It is however a record of light-sapping density and intensity of mood.

That dense atmosphere comes from the layers of drones or waves of distortion. Though essentially a traditional rock four-piece, the bass does little more than subtly underpin the colossal output of guitarists Matt Jencik and Ken Camden, while drums are simplistic thuds of bass drum/floor tom and cavernously reverbed snare and tambourine hits. This is particularly true of 'Marker' which very definitely bears the influence of JAMC, with the vocals having a distinguishable Jim Reid-like sneer to them, although the wall (or perhaps I should say walls) of distortion is a significantly more effusive presence. Another of the slightly more propulsive tracks, 'Meadowlands', features both the most pointillistic guitar playing on the record and the closest Implodes get to a chorus, with a blurry descent of vocal melody embellished by the echoing bleep of a primitive drum machine; of course all the while several shades of distortion are swirling around and droning away. The vocals just about avoid drowning in this sea of sound, being elevated by reverb which gives them a feel of enervated incantation. This is put to similarly good use on 'Song for Fucking Damon II (Trap Door)' alongside slow-motion drums which allow space for some more melodically intricate bass-playing to match the gnawing guitar hook, although the rhythm remains a steady plod with the exception a short passage of dramatic cymbal crashes and sky-scraping guitar squalls.

The oppressive atmosphere is in place from the opener 'Open the Door' up to and including the serrated metallic edges of closer 'Hand on the Rail', but there are several tracks where the use of acoustic guitar or cleaner sounds evokes a resilient strain of pastoralism amidst the bleak soundscape. This is truest on 'Screech Owl' where the main body of song is much like the rest of the record, but the presence of a plaintive acoustic strum both before and after comes across like the testament of a survivor of the tumult in between. 'Oxblood' is sheer dream pop, a slight strum adrift on celestial drones and hushed “aaaahs”, where as the bass-less 'Experiential Report' has chiming guitar bathed in mere hiss as opposed to distortion and given urgency by way of a insistent percussive tapping. The ambience of several instrumental tracks find variation within the signature sonic vocabulary of the album; 'Wendy,' fashions a gorgeous moan from buzzsaw guitar and flying saucer effects, and 'White Window' is a beautiful ocean of white noise, feeding the record's trademark sounds through a softer focus.

Nonetheless, occasionally Black Earth leaves you gasping for more air and eager for more light, something that might have been mitigated by the pushing the vocals up in the mix and laying off on the reverb a little bit. All the same, I reckon Implodes are a band who 'know their market' (to put it crassly) and it would be a compromise to let the light in to entice the non-believers. Implodes will do fine so long as they keep carving out bleak soundscapes that are as atmospheric, otherworldly and starkly beautiful as Black Earth.