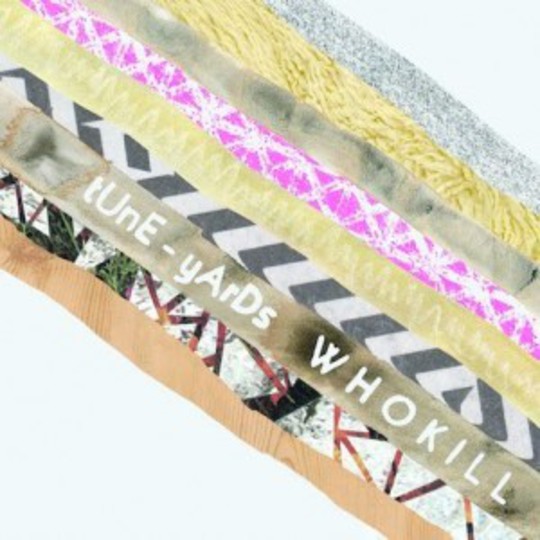 Every now and then, a record comes along so good it makes you want to revisit an artist's back catalogue to see if you missed anything first time round. Two Dancers by Wild Beasts and The Horrors' Primary Colours are two recent examples that spring to mind. Then of course there are records by artists whose name has had little bearing or significance in the past, yet thanks to the CD that's spent literally weeks on repeat play at every given opportunity, it has become something of an obsession in acquiring their entire repertoire. It's at this point I'd like to introduce tUnE yArDs, the one-woman project of New England-born and current Oakland resident, songwriter and multi-instrumentalist Merrill Garbus. Having been making music under the tUnE yArDs guise for the best part of five years now, it wasn't until 2009's BiRd-BrAiNs that her multi-faceted, genre-transgressing talents first came to the attention of anyone outside her native locality, and even then, as with yours truly, its impact was short-lived, eventually passing all and sundry by.

To cut to the chase, whokill, the follow-up to BiRd-BrAiNs, is a breathtaking collection of song-based ideas interspersed with both a lyrical and musical ingenuity that goes far beyond any expectations based on Merrill's previous work. Even listening back to her earlier creations now - and believe me, I've trawled through her career history since whokill implanted itself in my nervous system - there's little warning of this near-flawless exercise in creativity.

Where its predecessor was recorded using little more than a tape recorder and ukulele, whokill came together at the studio of California-based producer-cum-engineer Eli Crews, whose previous credits include the likes of Why?, Deerhoof and Erase Errata. Having also enlisted a permanent bass player in the shape of fellow Oaklander Nate Brenner, along with various session musicians - tenor sax player Matt Nelson being the most notable - it's clear to see why Garbus' musical vision has taken so many radically different shapes along the way.

As introductions go, whokill couldn't be much simpler or straight to the point. A lone voice precedes 'My Country' announcing "Ladies and Gentlemen, Merrill is performing at the..." before heavy Burundi style drums kick in Go! Team style and its creator's off kilter vocals take hold. At precisely two minutes and 24 seconds the song changes tack completely, Garbus' horn arrangement coupled with the varying sax accompaniments offering yet another dimension. It almost goes without saying that this is probably where Florence Welch would like to be. Signing off with the quip "The worst thing about living a lie is just wondering when they'll find out", 'My Country' is just the opening gateway to a record crammed so full of ambition one wonders if its seams are at bursting point.

'Es-so' could quite easily have been recorded by another artist completely, so different is it to the opener. Propelled by a post-punk orchestrated riff not a million miles away from Adam and the Ants' 'Friends' and accentuated by a hip hop beat once honed and perfected by Beck Hanson, Garbus could have crafted her first perfect pop moment were it not for the discordant Animal Collective style breakdown at the mid-point that would no doubt have radio playlisters scrambling for the fader. Better still is 'Gangsta', a looped beat heavy concoction of voice projections that feels like Paul Simon's Graceland receiving a ghetto blasted makeover courtesy of The World Famous Supreme Team.

The laid back strains of soulful groover 'Powa' once again recall Beck's Odelay, yet delve deeper into its lyrical content and that's where any similarities end. "Your power inside it rocks me like a lullaby" sings Garbus, an ambiguous statement whose subject matter becomes apparent when she adds the devilish "My man likes me from behind". "Baby, baby, baby, oh..." this most definitely isn't.

Barely halfway into whokill and Merrill Garbus has embarked on more diversions than an impatient BMW driver trying to avoid the North Circular during rush hour. 'Riotriot's colourful haze evokes Ariel Pink's more intricate creations, coupled with an abstract playfulness Miles Davis would have been proud of. Lead single 'Bizness' mixes African rhythms with Garbus voice now taking the form of a xylophone. Listen again and you can vaguely hear her insisting "I'm a victim, yeah", while a backing track that appears to be based on Bjork's 'Big Time Sensuality' coasts along merrily in the distance.

More hard-hitting percussion introduces 'Doorstep' before giving way to an air of tranquility culminating in Garbus declaring "I've tried so hard to be a peaceful lovin' woman". Arguably the most fragile sounding four minutes on the record, it shows off another string to Merrill Garbus precious bow. 'You Yes You' meanwhile takes the looped jazz funk punk of the Hoodoo Gurus and strips it down to a schizophrenic muddle of voice-controlled confusion, its creator again bigging up her man via the suggestive riposte "If home is where the heart is baby, then my home is inside you."

For all its charm and diversity, whokill isn't quite perfect, tailing off somewhat towards the end. While its acoustic-led inroads signal 'Wooly Wolly Gong''s sleepy dreamlike intent, at six minutes long its welcome is momentarily outstayed. Album closer 'Killa' meanwhile, for all its cheesy bass lines and summery vibes doesn't pack the same punch as what's gone before, although much of that is down to the ridiculously high standards Merrill Garbus sets elsewhere.

Yet as long players go, 2011 won't get much better than this, and with whokill, Merrill Garbus has somehow managed to encompass more ideas into just over 40 minutes than most artists manage in a lifetime. It goes without saying the bar has been raised, both in terms of Garbus and the rest of the competition. One can only hazard a guess as to what her next venture will sound like, but if whokill is anything to go by, tUnE yArDs' prospects are endless.