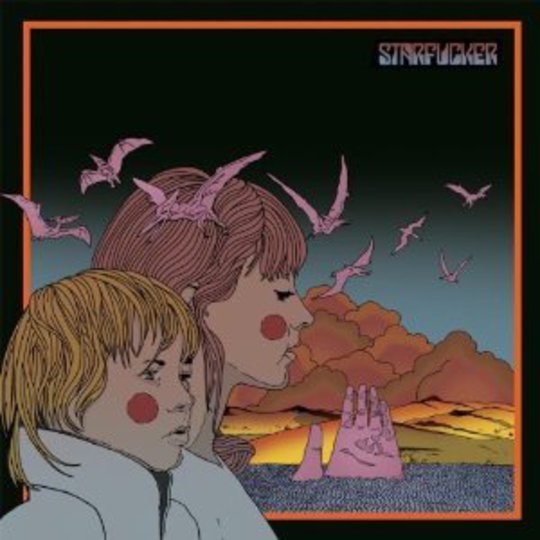 The week of writing this review, Starfucker were at South by Southwest. I was not, and so got the joy of a week’s worth of ‘I’m at SXSW, I’m industry innit?!’ while being in the freezing cold faced with the reality of just how much it costs to be a music ‘bod’ proper. Until, that is, one tweet popped up: 'Ryan just got arrested... WTF FUCK THE POLICE... Our show at 6 is canceled...' Accusations of heavy-handed Austin police started flying, a flurry of publicity followed, and it all seemed to be over before it had really started. So maybe SXSW wasn’t the place to be after all, at least for the Portland natives – even with all the accompanying publicity it's not exactly the way to launch an album, let’s be honest.

Fortunately Reptilians presents the band as decidedly more chilled out than being accused of resisting arrest would suggest, with the West Coast mental shoegaze influence very much out in force. From opener ‘Born’s acoustic intro kicked into high gear with club beats, through to ‘Quality Time’s’ backing which I’m fairly certain comes straight from an Atari game, the album doesn’t exactly make an effort to disguise its influences. More, er, steal outright. It’s a bit like what I imagine it’d sound like if you hijacked a Daytona USA game, spliced it with a folkster and threw in a philosopher for good measure, and threw it down the stairs. You know, just to watch the hideous creation suffer.

If that makes Reptilians sound like it’s a bit disjointed, well, that’s because it is. The album’s flow is interrupted periodically by spoken-word philosophical musings on death and the nature of reality, which seems to be an attempt to crowbar some philosophy into what would otherwise be a relatively straightforward indie dance album. Starting with the second half of ‘Mystery Cloud’, these musings are basically a more morbid version of ‘Everybody’s Free (To Wear Sunscreen)’. Yes, that Baz Luhrmann track that was impossible to escape from back in 1999. Sorry folks, it’s back and there's not a sun in sight! On its own it’d work, but there's no less than three parts of this track dotted through the album, and all these interludes really do is serve to highlight that there’s not really any great lyrical focus that binds the album together as a whole. Nor does it work purely as an album to make you dance mindlessly - it's slightly too wannabe cerebral for that, too.

The positives only just about average out the cons, but they are there. It’s exactly the kind of music that works well both in clubs and listening to alone at home, with the necessary atmosphere both those environments demand. Songs like ‘Born’, current single ‘Julius’ and the second half of closer ‘Quality Time’ offer the opportunity for classic bopping around the pub, club or your bedroom. Meanwhile, the likes of ‘The White of Noon’ and ‘Hungry Ghost’ offer the kind of swirling chill-pop seen in Passion Pit or MGMT’s more sedate moments.

All in all, there’s more that’s good about Reptilians than bad. It’s a fun album with some great songs you can both dance to and listen to and, in its first three tracks, some excellent pop singles. Which makes it all the more frustrating that it doesn’t quite hold up to repeated listening as a whole. The album doesn’t have that ‘grab-hold-and-don’t-let-go’ emotional pull that would elevate it beyond sounding nice into something to treasure. It’s worth your listening time though, because even though it’s not always consistently a great album, it’s never less than an intriguing effort.