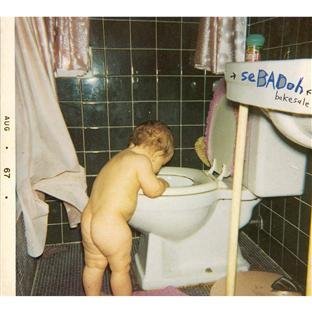 In this current climate of reissue fever, Sebadoh seem to be consistently putting more care, attention, and enthusiasm into their efforts than most,»

closethe album features a bonus disc containing all singles, eps and rarities from the 'bakesale' period lovingly compiled by lou and jason. released in 1994, bakesale was sebadoh's great act of de-cluttering. eschewing the free flowing experimentation of 'sebadoh iii' and the schizophrenic lurches of 'bubble and scrape', sebadoh re-constituted itself with a new drummer, bob fay, as its two principal songwriters, lou barlow and jason lowenstein, refined their craft to deliver a masterpiece of concise heartworn pop. 'bakesale' is sebadoh at their most focussed and fluent, the unpredictability of their line-up and live shows replaced with a new found sense of equilibrium. the record is still thoroughly sebadoh however, so while the performances are more polished and the production and sound quality much clearer than their previous recordings, the subject matter remains the same; 'bakesale' is one of the very greatest indie-rock break up records (and there are many). running in sequence so barlow's and lowenstein's songs alternate with each other, 'bakesale' explores the affairs of the heart; either as worn on barlow's rumpled sleeve, or in the passive / aggressive arguments of lowenstein's stoned psyche. the exuberant but tense rush of license to confuse, magnet's coil, skull and rebound show barlow's voice at its sweetest; while careful, not too amused, and drama mine signified a new accessibility in lowenstein's songs that ensure that he and fay were now operating on equal terms. in between is bob fay's temptation tide, which in the manner of sebadoh's ultra-democratic modus operandi featured the vocals of his partner anne slinn. comprising of fifteen tracks in just over 40 minutes 'bakesale' is a blur of confession and melody concluding with together or alone, one of barlow's most vulnerable and tender moments of self-doubt. upon its release and in tribute to its tuneful accessibility, bakesale secured sebadoh their first top 40 position in the uk album chart and in the us the band were smartened up for mtv. sebadoh however, remained defiantly uninterested in the mechanics of high-end success, and it's 'bakesale's intimacy and lightness of touch that both captures the atmosphere of mid-90s lo-fi america coming of age andendures so well.
description from www.roughtrade.com