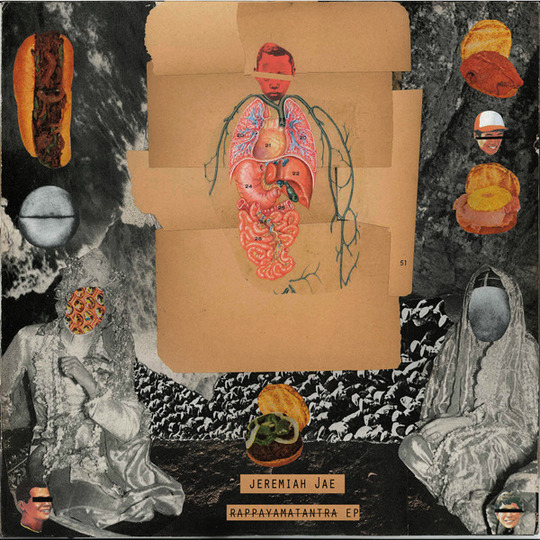 For Brainfeeder, it feels like 2011 might be the year that a label comes of age. The LA imprint dedicated to all things oddball and electronic coming out of California turns three this year, and like a toddler gradually finding it’s feet, Steven Ellison‘s (better known by his nom de plume, Flying Lotus) label is beginning to articulate itself. What started out as a foray into oddball off-kilter electronica and the physical documentation of a frenetic live scene (The Low End Theory) has evolved into something with far wider reach. It’s tempting to draw parallels with Warp’s ascendancy in the Nineties and early Noughties: Brainfeeder has released dark, moody techno (Lorn), alongside pyschedelic dub (Ras G), whacked out electronica (matthewdavid and The Gaslamp Killer), cerebral club music (Tokimonsta and Samiyam) and even pure jazz (Austin Peralta). And now, with Jeremiah Jae’s Rappayamatantra EP, they’ve dipped their toes into pure hip hop.

Or have they? Judging by Ellison’s tastes, it was always fairly unlikely that Jae would turn out to be a straightforward rapper. Brainfeeder’s watchword has always been experimentation, and their young ‘rapper’ is no exception. His DXNCE EP showed him to be a breathtakingly leftfield artist – albeit frustratingly inconsistent with it – whilst mixtape Eating Donuts & Other Refined Foods, his own tribute to the LA scene’s inspirational beat prophet, J Dilla, showed an ability to marry invention with enjoyment. The question, therefore, is what will Rappymatantra prove to be?

The answer is a little of both of the above. First of all, let’s be clear that there’s no-one else in hip-hop doing anything even remotely close to what Jae’s doing. Whatever my admiration for the Oddfuture crew and other leftfielders around today, it’s possible and plausible to trace their lineage through hip hop somewhat. They have antecedents: what they are doing, however extreme and radical it may be, was built on a template laid down by forebears. Not so with Jae. For starters, it takes two tracks and five minutes before we even hear him start to rap, and when he does, the lines on 'Guns Go Off (Remix)' sound like they’re being delivered over a tannoy, rather than through a microphone. What passes for Jae’s flow is a lazy, drawling slur: as he repeats "guns go off yeah / guns go off” it almost feels like he’s mocking the aggression in his own lines. Jae’s rhymes aren’t so far from the hip-hop devolutionism practiced by Lil B: 'Raw Tape$' is a warped vignette of brag anthem, Jae lazily passing out lazy non sequiteurs on how swagged out he is. Elsewhere, on '$easons', over an Eastern sample seemingly shouting out Dilla, Jae showcases a more soulful side, over a beautiful crooned sample and dripping water electronica: “Night comes down and I’m at it again / can’t understand why I’m at it again”.

His approach to beatmaking is similarly oblique and variegated. The album opens with a sample of a radio announcer describing John Cage’s performances, and it’s hard not to feel that the avant-garde composer’s love of ‘chance’ music fits in perfectly with Jae’s vision of his own creations. Hissing snares collide chaotically with fuzz guitar, shuffling tribal drumbeats, incomprehensible samples and grunting baritone sax. The EP’s title is prophetic: a ghostly Eastern vibe overhangs tracks like 'King’s Bop' which builds from a snakecharmer loop into Sun Ra free jazz. Jae’s percussion sounds like ghostly impressions of the claps, snares and the other tools preferred for use by other beatmakers: ‘Raw Tape$’ eschews any kind of beat in favour of warping, shifting synth, whilst ‘Vertical Pupils’ feels like a ‘spent’ beat if there could be such a thing, a clattering clanking percussion loop skulking along for three minutes. The highlight is 'Stones Passage', which sounds like a vintage Flying Lotus video game style cut, interspersed with crazed gibberings and flute loops.

This cut and paste style has a downside: whilst it’s enthralling to hear something at once so hip hop and simultaneously so, well, psychedelic, there’s no real feel of continuity across Rappayamatantra. It leaves the listener just as confused about who exactly Jeremiah Jae is as before they’d listened to it: for this type of cut and paste beat science, an EP will never be long enough to display Jae’s beating heart and soul. And it’s unfortunate that rather than a solid body of work, this EP comes across as more of a sampler of Jae’s talents – a dash of leftfield hip hop, a broad smear of beat science and a splash of eastern fuelled pyschedelia – which is all well and good, but goes no further than his previous efforts in defining exactly what he’s looking to do. However, Rappayamatantra is a successful addition to the Brainfeeder canon, even if it is a little too raw, rough and ready to be taken as an instant hit. It’s relentlessly experimental, fearlessly diverse and unashamedly cerebral: and if that isn’t praise enough for a young artist starting to etch his mark, then I don’t really know what is.