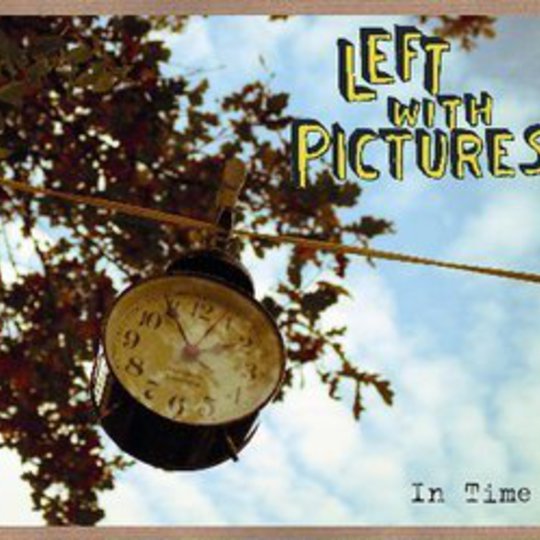 It’s easy to see why most bands approach their second longplayer with a note of trepidation. Having a lifetime to write album number one then a matter of months to produce the subsequent musical goods is a galling proposition. Add to it the very real prospect of an attention-bereft fanbase having already moved on to the latest fad and that sophomore offering begins to look like a monumental challenge. No wonder so many artists combust at the second hurdle.

Perhaps anticipating this career-erasing proposition, Left With Pictures have approached the follow up to 2009’s Beyond Our Means with an unusual twist. In Time may bear hallmarks of an archetypal album – 12 tracks, 45 minutes long, available in a range of formats – but its contents were composed in a much more unique manner. Over the course of 2010, the London quintet set about writing, recording and producing one full song (with accompanying video) a month and releasing it via Gideon Coe’s radio show on 6Music. In Time is the fruit of that labour.

Now, as many a marketing department will attest, the piecemeal approach to presenting a product will (in the very best marketing speak) maximise customer desire, leaving the manipulated masses slavering for more. But that only works if the product’s actually desirable. Give your audience something it doesn’t want and you’ll fail. No amount of floral window dressing or quick-quipping slogans can change that – a lesson Left With Pictures would have done well to heed.

Admittedly, In Time’s creation certainly piques interest, but its contents are far from rousing. The arable-pop ensemble seem to have addressed the criticisms of Beyond Our Means – a solid chamber-pop showing that lacked any real chomp – by honing in on the presentation rather than the execution. Instead of producing a thrilling follow up of glossy indie jaunts, they’ve crafted an inoffensive offering that drifts along as a translucent daydream, blissful in its own sense of nothingness.

‘Constantly’ serves up the first taste of the record’s banality. The tender, creeping piano strikes give way to a rising wash of plucked banjo and mourning strings while Stuart Barter unleashes a haunting, misanthropic warble. It’s a choral affair, and one that’s rich with instrumental textures, but there’s no underlying spark, no neck-bruising grab of the collar that demands attention. Instead, the cut’s gauche, celestial blowing is helium balloon-like in sound: momentarily cute, but all too easy to let go and forget about.

The driftwood accumulates the deeper you wade. 'October Waits’s a capella waltz reclines as the bellowing of a barbershop quartet lost deep in Robin Hood-era Sherwood Forest. ‘Go, Simon, Go!’ is equally reliant on retrograde swooning; working the initial cool jazz beat into an airy Ooberman-like haze that finds Barter purring “don’t give up you’re almost there, there’s one more night away from home, and then your mother comforts you”. Such honey-smothered odes to love may work for wet-eared school boys. They don’t here.

Given the iterative blueprint, In Time’s disparate, schizophrenic nature should be its main stumbling block. But this lack of melodic flow almost proves its redeemer. Beside 'Ropes’'s stomach-acid gargle of cute synths and strings sits the buoyant pop spectacle of ‘June’, an infectious, tumbling rollick that – aided by Toby Knowles’ acrobatic tenor – has the curious edge of Wild Beasts doused in sunshine and high on valium. Likewise, the delicate, candle-burning canticle of ‘River Avon’ bears absolutely no resemblance to ‘The Ideas of March’s giddy, medieval swell, yet it's all the more remarkable for it.

Despite these momentary stays of execution, In Time mostly courses with an insipidity that scythes down its ambitions as both a listenable piece of work and a musical project. Sure, once in a while, fleeting slithers of song may lodge their way into the ear canals, but these are rare occurrences on a record lacking sharpness or direction. As a concept and a marketing trick, one tune a month may prove an attractive hook on which to hang a range of unpolished ideas. As an album, In Time proves the result is much less appealing.