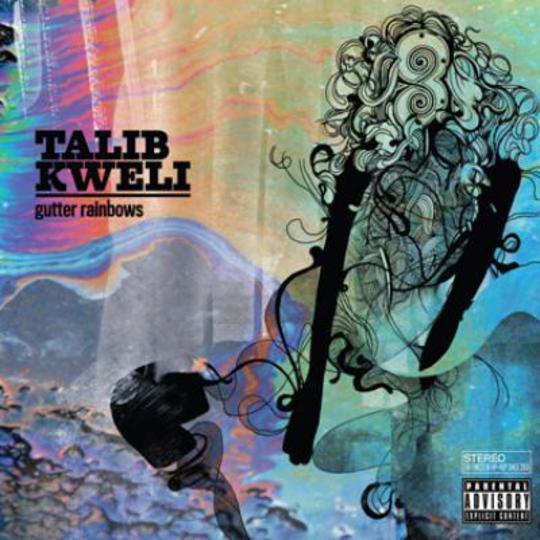 There is a (not so) famous lyric from the Jay-Z track 'Moment of Clarity' where he answers critics who claim he has a lack of lyrical depth by saying "I dumb down for my audience and double my dollars, they criticise me for it, yet they all yell hola, if skills sold, truth be told, I’d probably be, lyrically, Talib Kweli". With those old-school considerations of wordplay very much at the forefront, Talib Kweli has released his latest album Gutter Rainbows. The intervening years between Hova's The Black Album and Kweli's newest have moved the age-old debate about lyrical supremacy on somewhat. The Southern dominance of American hip-hop over the past few years has relegated lyrical dexterity to an anachronistic proposition, with the occasional exception of Lil’ Wayne.

Hip-hop is nothing if not a broad church though, and for every million views on a Gucci or Kalifa track on YouTube there will be thousands of comments bemoaning the current direction of the mainstream. Kweli joins those who rail against the new orthodoxy of rap from the outset of Gutter Rainbows. It's there in the old-school soul and jazz breaks which form the template for the majority of the record. It's there in the little diss interludes, like the one between tracks four and five, where an enthusiastic (yet curiously nasal) fan implores our man: "Yo Talib shows these niggas what is man, you a real rhymer man you a real MC man, these old doo-doo ass bonehead, fucking squarehead spongebob head motherfuckers kids they ain't got no skills, they can't do shit, hey yo Talib tell 'em man, c'mon son". Yet while Kweli has impeccable credentials to throw shots at rappers today- he is after all one of the most technically gifted MCs of the last decade - Gutter Rainbows leaves him open for a return jab by being ever-so-slightly brown bread in its weaker moments. This is the reason that Kweli has never reached quite the same heights as conscious rap peers like Mos Def or Blackalicious. On top of his game, there are few to touch him. Off it, many will.

It would be a futile exercise to try and pick out the moments which let Gutter Rainbows down, though. None of the 17 tracks leave anything like a sour taste in the mouth; several of them won't live long in the memory, is all. It seems more intuitive to talk about the moments that everything does click, the first of those being the assured rising gospel riffs of 'So Low'. The spiritual backing gives Kweli the kind of gravitas that he doesn't always bring himself. 'Wait For You' sees Kweli riffing confidently with and against the Rhodes-and-horn-soul rhythm. 'Ain't Waiting' has an intensity which Kweli impressively cuts through, breaking rhymes down on each bar at the insistence of a synth break. The Oh No-produced 'Uh Oh' is another one track where Kweli stands tall against a heavy beat, and a cameo from the always impressive Jean Grae does a lot to inject some variety into the record. 'Self Saviour' has a lovely little plaintive piano break which suits Kweli's conscious style well in the same way that the gospel of 'So Low' did.

The tracks that don't leap out of Gutter Rainbows and grab your attention won't taint the ones that do, and overall this is an enjoyable, if not wonderful, record.

Until the Light of Morning