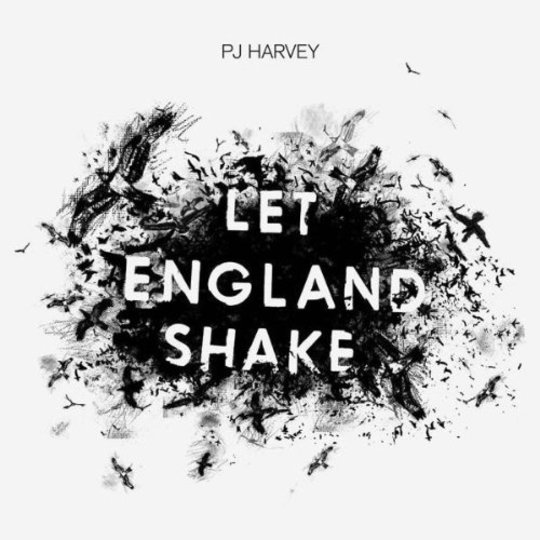 Last year, my girlfriend’s parents asked me what I wanted for Christmas; panicking somewhat, I requested ‘A bottle of whisky. Or a book about the First World War. Because I’m old now’. And you know, it was sort of meant as a joke, but when a litre of whisky and two books on WWI appeared on December 25th, I cannot deny that all three items proved to be thoroughly moreish. And if interest in the Great War in mounting proportion to one's age is bit of a middle class British cliché, then at least I’m in good company, because PJ Harvey has just written an album on the subject entitled Let England Shake, and it is astonishing.

Overtones of violence aside, Polly Jean Harvey’s eighth studio album represents an almost total break with the music the original PJ Harvey trio made in the early Nineties. From her subsequent career, the girly, ethereal falsetto of White Chalk has been retained, as have musicians John Parrish, Mick Harvey and producer Flood. And that’s about it.

Certainly it’s a case of blues rock out, ‘The Last Post’ in. That centuries old bugle call for British war dead is deployed as a statement of intent three tracks into Let England Shake. Eerily puncturing the lustrous dreamfolk of ‘The Glorious Land’, the bugle offer a constant, jarring reminder of entropy and decay as Harvey’s guitar pulses like weak sun caressing an old battlefield, her voice trilling a macabre lullaby: “How is our glorious country ploughed? Our land is ploughed by tanks and feet” runs the first verse; “What is the glorious fruit of our land? Its fruit is deformed children” she concludes. A chorus of “Oh, America, Oh England” feels both opaque and laden with intent; you can frame the song as a comment on Western imperial endeavour, or you can view it as an awesomely foreboding nursery rhyme - the record is a possessed of a certain revulsion towards war, but it is entirely without polemic.

But the bulk of the songs clearly are directly concerned with the First World War. You might even push things so far as to call Let England Shake a concept album about Anzac troops in the Gallipoli Campaign. “Death hung in the smoke and clung to 400 acres of useless beachfront” Harvey keens during the stinging mania of ‘All and Everyone’; ‘On Battleship Hill’ takes its name from the site of the battle of Chunuk Bair, Harvey forcing her voice above the guitar's luminescent thrum, approximating the pitch of some sorrowful celestial onlooker as she cries: “On Battleship Hill’s caved in trenches a hateful feeling still lingers, even now, 80 years later; Cruel nature has won again”; and the concluding ‘The Colour of the Earth – with vocals by the Australian Mick Harvey – is a homage to the homespun songs of the trenches: “Louis was my dearest friend, fighting in the Anzac trench, Louis ran forth from the line, I never saw him again” he intones with rough, sing-song wistfulness. Elsewhere ‘In The Dark Places’, ‘Bitter Branches’, ‘The Words that Maketh Murder’ and ‘Hanging in the Wire’ have vaguer geography, but offer no less beautiful visions of carnage(‘Hanging…’ being particularly spine tingling, a disturbingly lovely, painterly account of a soldier’s corpse suspended in barbed wire in No Man’s Land).

Yet for all these accounts of foreign fields, it is home soil that hovers like a wraith in the background. “England’s dancing days are done” , Harvey coos on the title track; this is an album about the passing of something more than men's lives. In the shimmering guitar patterns and aching vocal melodies, in the sense of lament and elegy, the sparkling minor keys and exquisite acoustic layers, there’s the sense of something monumental ending. The slaughtered Anzacs, the suspended private in ‘Hanging in the Wire’, the “soldiers dropping like lumps of meat” from ‘The Words that Maketh Murder’; they’ve died for a once gleaming, now gone ideal of Great Britain. Let England Shake is neither damning, patriotic, nor angry; its gristly lyrics do not dictate the mood. It is a record marked by a weary wonder at the departure of something huge from the world – Victorian invention and enterprise, the ages of steam and discovery, the impossible cruelty of empire, all fading into a half-remembered dream.

Stripped down to White Chalk-style bare bones, this would still be outstanding – Harvey’s glittering high register is prettier and often genuinely more unsettling than her blooze growl of old, and these are the finest lyrics she's ever written. But the music is something else, dreamy and inviting but with a wild, danceable Old World pulse. There’s a wild eyed euphoria to it all, one that comes from sudden sunlit rushes of brass, semi submerged rhumba rhythms, intoxicating call and response backing vocals, and brazen nods to popular hits (‘The Words that Maketh Murder’ cribs the line “I’m gonna take my problem to the United Nations” from Eddie Cochrane’s ‘Summertime Blues’).

Writing this, it occurs that despite prevailing wisdom about the state of the music scene today, 2011 can’t be that bad if, just two months in, a reclusive 41-year-old woman gets to release her First World War-based masterpiece on a major label. England’s dancing days might be over, but things could be worse.