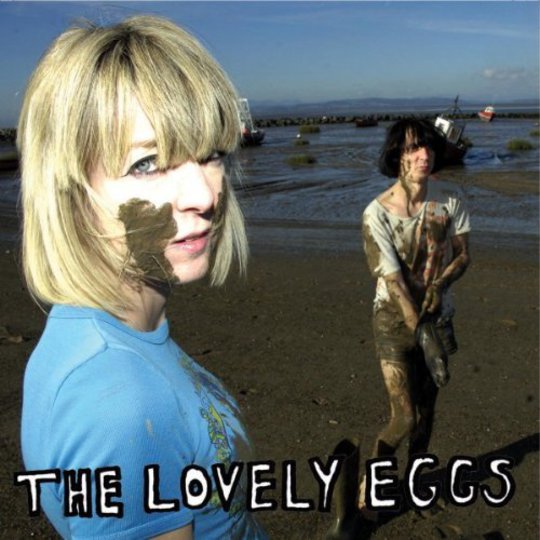 And so Cob Dominos, another skewed pop missive, arrives from the planet of The Lovely Eggs and the world seems a much better place for it. I have to admit that I break into a broad smile every time an email from Holly and David arrives to keep me up to date on their latest exploits and escapades, so when I got (awfully polite) word that the Eggs had a new record on the way I couldn't turn down the chance to let them into my life once more. And I'm so glad that I did.

What could better soundtrack the arse end of a freezing, bleak and depressing winter and the ushering in of spring than the boundless energy and enthusiasm of these grunge pop miscreants?

Who better to drag me by the scruff of my neck and yank me from my obsessive Violet Cries/Love Remains cycle (possibly licking a thumb and rubbing fiercely at some food stain or other on my cheek)? This record is the aural equivalent of a chirpy 'Cheer up, it might never happen!' Except you won't feel the desire to lamp them.

And hey, even the Eggs aren't afraid to look at the dark side of life. Just take the self-explanatory 'Fuck It', in which Holly takes a look into the void (birthday clowns and drive bys) and comes to the only conclusion that one can in these times of financial collapse and religious unrest: “Fuck it”.

A sentiment which only seems heightened by the song being followed by the frankly genius 'Muhammad Ali'; essentially a list of every famous Ali or Alley the Eggs can think up in 13 seconds.

What really endears Cob Dominos to me however, is the way over half of the tracks on the record sound like they could be the theme song to a million imaginary mid-Eighties Sunday afternoon British sitcoms. Take 'Panic Plants'. An ode to worry and obsessive compulsive disorders, it manages to bring memories of eating tea in front of Watching or Brushstrokes rushing back. Happier, more innocent times my friends.

Which will probably tell you that The Lovely Eggs haven't exactly changed their MO since debut If You Were Fruit. We're still talking jangle pop guitars and potty mouthed observations being beaten rudely but playfully around the head by crashing grunge riffs, but when the results bring earworms this fat and wrigglesome then who would want them to change?

Cob Dominos comes at you with all the child-like joie de vivre of the entire cast of Why Don't You? on the biggest fucking sugar rush of their life and it's impossible not to let it overpower you, scribble rude words on your face in permanent marker and leave you grinning like a twat.