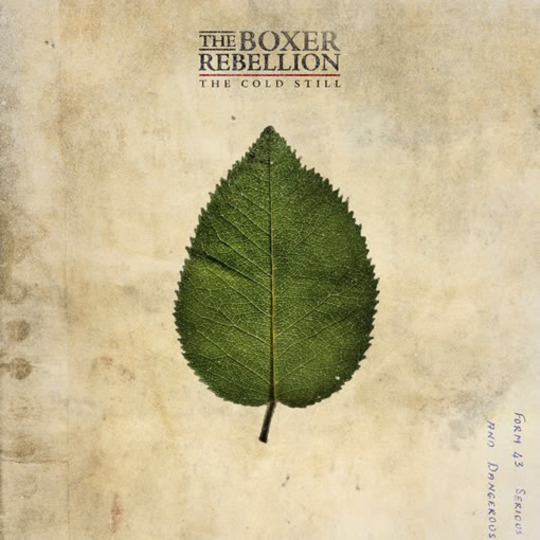 We're only 30 seconds into The Cold Still and Nathan Nicholson is suggesting that "Maybe there's no use, the way it was before." It doesn't read like an epitaph, but more a statement of his and The Boxer Rebellion's quest for a clean slate, new beginnings and perhaps more importantly mainstream recognition.

Without dwelling too much on the past, it would be fair to say that The Boxer Rebellion are one of the unluckiest bands in living memory. Indeed, one wonders if some evil charlatan was actually placing unavoidable ladders on every street corner within walking distance while leaving mirrors under the front and back wheels of each member's cars should they decide to opt for an alternative means of transportation. Standing on the cusp of greatness ever since the impeccable 'Watermelon' announced their arrival some eight years ago, they've been dogged by a catalogue of setbacks, many of which would have consigned lesser artists to retirement years ago ('If we were solo artists we'd have all quit by now' said Nathan Nicholson in a recent interview).

What's quite remarkable about this band is that ever since 2009's grandiose Union heralded their resurgence, they've risen against adversity in spectacular fashion. Perhaps surprisingly for a band whose sound is quintessentially British (despite the origins of their singer and guitarist), The Boxer Rebellion are more likely to be found selling out venues Stateside than back home, where astonishingly they're still viewed by many within the music industry as newcomers.

Nevertheless, they've progressed onto that all important third album and once again, entered a musical seachange. After Union, possibly the closest The Boxer Rebellion will ever come to creating THE perfect album as far as yours truly is concerned, it was always going to be a challenging decision as to what course of action the band would take next. Persuading producer extraordinaire Ethan Johns to come on board could be seen as something of a masterstroke, his last contribution partly responsible for the flood of acclaim bestowed on Laura Marling's I Speak Because I Can, whilst ultimately paving the way for Kings Of Leon's career beforehand.

Here, Johns' knack for making every instrument sound like a heartbeat, every chord resemble a final breath, comes to the fore, particularly on opener 'No Harm'. An assertive piano melody flowing through it like blood coursing through every vein, its chorus opening up like Elbow at their most lavish. 'Locked In The Basement', meanwhile, takes the form of a lullaby, albeit one that seems more cautiously aimed at a partner rather than one's offspring. Nicholson's vocal takes on a similar air of fatigue to that of Doves' Jimi Goodwin on 'Kingdom Of Rust', lines like "I don't want anything, anything at all" suggesting an element of closure in its sentiment.

That's not to say The Cold Still is all about emotional ballads and heartfelt statements. Lead single 'Step Out Of The Car', broody U2 flavoured rocker 'Memo' and the fast and furious 'The Runner' all hark back to both Union and its predecessor Exits. Todd Howe's exquisite guitar sound is key throughout, all three provide a welcome respite from the largely maudlin feel engulfing the rest of the record.

However, when The Boxer Rebellion do acoustic laments, there's no one who can challenge them. Take both 'Caught By The Light' and the closing 'Doubt': the former taking its inspiration from Chris Isaak's 'Wicked Game' musically, while Nicholson spits the couplet "And the memory gets deeper, survived by the pain" while the latter reveals a deep seeded paranoia rooted in trust and betrayal, bringing The Cold Still to an eventual and natural standstill.

Whisper it quietly but this could be the record that breaks The Boxer Rebellion onto the daytime radio schedules at last. However, whether it's their best collection to date would be open to debate (and to these ears it isn't; Union still takes that accolade by a fair margin). In any case, it should serve them well both for the present and the future.