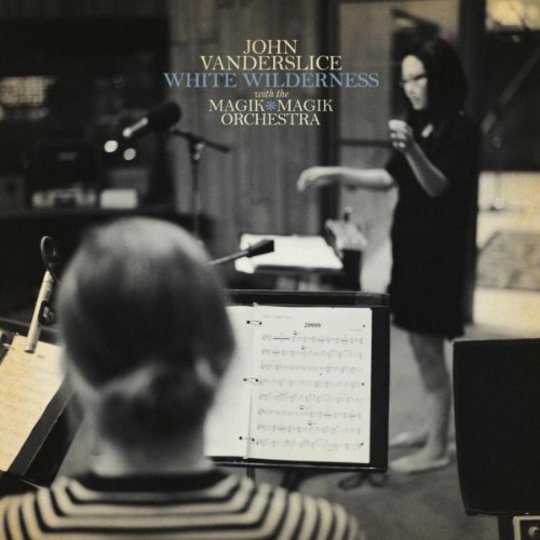 It’s a well-known fact that Florida-born John Vanderslice has long-established his reputation as the Nicest Guy in Indie Rock(TM). So it’s not surprising that to sit here and tell you that his latest effort White Wilderness is a bit of a chore leaves me with a sour taste in my mouth. At the same time, let’s not overlook the fact that San Francisco’s Magik*Magik Orchestra should be equal parts a recipient of the sharp end of any criticism, for the record is as much a product of their creativity as it is Vanderslice’s. They played a pivotal role in the compositional process: once the nine songs had been written acoustically by Vanderslice, the reigns were totally (and very trustingly) passed to the orchestra’s artistic director, Minna Choi.

At this point, it might be easy to find fault in the method rather than the architects, but I then I happen to own a copy of Sam Amidon’s All Is Well, featuring the similarly independently conceived input of New York based composer Nico Muhly. And this disc, ladies and gentlemen, is an absolute education in the pairing of simple acoustic recordings with subtle and charming classical orchestration. I can’t help but feel that it’s the record that White Wilderness could (and has the potential to, in some instances) be. Maybe a version with slightly brighter eyes and a greater sense of youth, but the principle still applies.

‘Convict Lake’ and ‘The Piano Lesson’ are the first of the nine tracks that offer promise of this pop record based on a slightly kaleidoscopic take on the secondary school orchestra. On the latter, plucked strings hold discussions with accented saxophone lines, while the occasional flute and trumpet can be heard expressing their thoughts in the background. Unfortunately, it’s not long before it feel like the song has outstayed its welcome, becoming stale long before it finishes. On ‘Convict Lake’ there’s a particular four-note saxophone figure that becomes especially tiresome after the ninetieth-or-so repetition.

It’s sad, but Vanderslice’s lyrics sound (for the most part) like they could be interesting, were they not delivered with a sort of pale apathy. I know suddenly becoming a renegade supporter of his delivery might raise a few eyebrows, but there’s something about his voice that fails to encourage any sort of successful cooperation with the agile and energetic assortment of instruments that includes strings, piano, saxophones and even the rhythmic syllables of a few singers. On ‘The Piano Lesson’ for example, Vanderslice sings, “go ask anyone/I am my father’s son” a phrase that sounds, when written here, as if it’s loaded with significance and meaning. In reality, its muted delivery is only spotlighted when set in contrast to the vivacity of the orchestra’s accompaniment. This isn’t an attack on either party, but rather the collaboration itself – the two just never seem to completely lock into one another.

Interesting to note, then, that my favourite track from the record is ‘After It Ends’, notable here for being the only song free of the contributions (and complications) of the Magik*Magik Orchestra. I’ll let you decide whether you want to assume there’s any sort of correlation.

Having spoken of the record's ‘potential’, I feel it only right to back it up with some honest audio-visual proof – this version of ‘Too Much Time’ from 2009’s Romanian Names is, dare I say it, near perfect. Still with the Magik*Magik Orchestra, sure, but when their contribution is just an arrangement of a pre-existing Vanderslice song, there’s less room to complicate things with an unnecessary surplus of instruments and overly-intricate compositional ideas. It’s also worth noting that this song has far more drive than any featured on White Wilderness.

White Wilderness feels like a record that could have become a compelling collection of wonky strum-along pop songs with imaginative and colourful instrumentation, but ultimately it's indebted to an over-complication of ideas in a collaboration that struggles to flourish the way it should do on paper.