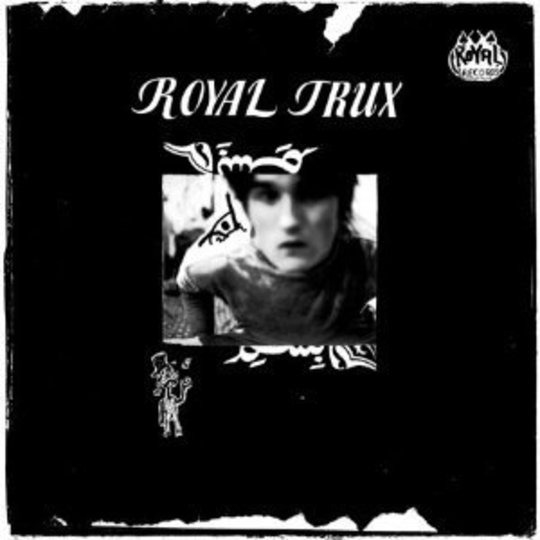 Collaborators and lovers Jennifer Herrema and Neil Hagerty released their first Royal Trux record in 1988. She was 16, he a veteran of Washington rockists Pussy Galore. They stayed together for the next 13 years, becoming notorious in equal measure for their scuzzy rock, iconic appearance and drug-addled lives. They were the ultimate indie rawk couple: John and Yoko as played by Sid and Nancy or what might have been had Keith Richards and Anita Pallenberg formed a duo. When not onstage or in the studio she’d moonlight as a model for Calvin Klein and he’d go out and score more scag. The insider’s outsiders, these two gun-toting Republicans were critical to the founding of Drag City (their Hero Zero single was the label’s first release) before scoring a million dollar deal with Virgin. Their legend hardly required them to produce any actual product, but somehow the records kept rolling out, and Domino has just had the decency to reissue the first four, without extras or explanation, a decade after the pair went their separate ways.

Royal Trux's self-titled debut was a fair old statement of intent. Hagerty’s strained guitar extrapolations and Harrema’s fag-end bark were already present and correct, as was the unstable relationship between song and sound that would dominate their early efforts. Opening with the detuned Beefheartian riffage of ‘Bad Blood’, an angry curse of a song, it would be hard to pinpoint the era of recording should you come to it cold. The Sixties loom large in the band’s sonic palette, the influence not only of garage rock, but also free jazz and psychedelic experimentation plain to see. ‘Incineration’ slyly walks the line between brutal rock decimation and cartoon blues devilment; ‘Strawberry Soda’ is pure garage rock with an utterly diminished libido; shades of Don Van Vliet return in Hagerty’s vocal phrasing on ‘Andersonville’ before it builds from a stumbling mesh of improvisation into a splenetic thunderstorm and back again. Elsewhere, ‘The Set Up’ has an unexpected kindly guitar and piano motif ride a detached percussive attack with the vocals fighting to be heard in the mix and ‘Esso Dame’ is built around some marvellously off kilter licks. It’s a record brimming with ideas, but there remains a sense that few have been worked out to their conclusion. The ‘barely there’ production endows a strange intimacy with Hagerty and Herrema – it’s just you and them and a handful of instruments in room – but a firmer hand could well have netted more memorable results. (7)

Compared with their next effort, however, that debut was a masterclass in concision. The sprawling double LP Twin Infinitives is perhaps the most strung out record ever committed to vinyl. Burbling slabs of synth, unmeditated screes of guitar, hollered vocals and bizarrely elongated gaps between tracks all serve to give the impression of a bag of noise dropped into a box and allowed to fester. It’s a dislocating experience, but there are nonetheless some genuinely fascinating cameo moments sprinkled throughout these grooves. The two and half minutes of ‘RTX – USA’, on which a tin whistle melody vies for space with sludgy low end burbles and an unstoppable garage rock stomp, have a tap-along quality not present elsewhere on the album. ‘Chances Are The Comets In Our Future’ interestingly bounces echo-soaked vocals against metallic thwacks and plundered bass throbs, even if it seems to do so endlessly. The programmed drum loops that open ‘(Edge Of The) Ape Oven’ hint at a direction that would be fully explored ten years later on the Radio/Video EP, but the song itself woozily drifts away from that intensity over its epic fifteen minute length. The threatening piano chug of closing ‘Ny Avenue Bridge’ is scant reward for surviving the preceding hour’s torrents. Spaceman 3’s adage about taking drugs to make music to take drugs to has never seemed more drearily apt – shovelling an assortment of powders into your body before sticking it on would certainly make Twin Infinitives a less excruciating experience. Unavailable for many years, the record now seems more critical to the Trux legend than their back catalogue. Lessons were clearly learned from the recording, but it’s still essentially an interminable headfuck. (5)

It’s hard to know whether Hagerty and Herrema intentionally called two of their first three records Royal Trux or simply forgot they’d already used the title. 1992’s Royal Trux is a more focused affair than either of its predecessors. ‘Air’ is a delightfully casual strum back into the world of the tune; ‘Junkie Nurse’ comes on like an offcut from Exile On Main Street; the overdriven lead guitar that underscores ‘Lightening Boxer’ flows with invention, while that songs lyric - “someone’s choking in this tune” - signals the juxtaposition between straight rock and fretful experimentation that is key to Royal Trux’s music. Acoustic and electric guitars combine throughout to give the record a depth and warmth previously absent; similarly Hargerty and Harrema’s voices coalesce to great effect. The band have honed their songwriting too, and by closer ‘Sun On The Run’ seem ready to take on the world as Harrema growls about feeling good and getting on top. (8)

With 1993’s Cats and Dogs, an expanded line up had moved up a gear once again. Here are not mere experiments, but a record that truly felt like the finished article. From the opening bars of ‘Teeth’, the album blasts off like a rock behemoth. ‘The Flag’ bristles with rhythmic invention, Hagerty’s guitar playing building to a caustic frenzy against an irrational drum workout. There’s still room for acerbic noise pieces like ‘Friends’, but now they surge with vitality. The introduction of drummer Ian Willis allows a for less fragmentary approach - his tribal battering makes highlights of ‘The Spectre’ and ‘Tight Pants’. ‘Turn Of The Century’ and ‘Up The Sleeve’ are a fuzzed beauties, Hagerty and Herrema’s singing in unison creating a charred strength through mutual vulnerability. ‘Hot And Cold Skulls’ is a splayed jive with an irresistible hook. Here, finally, Royal Trux had delivered. Their excellence perfected to a level that it would, happily, remain at through the rest of the band's lifespan. (9)