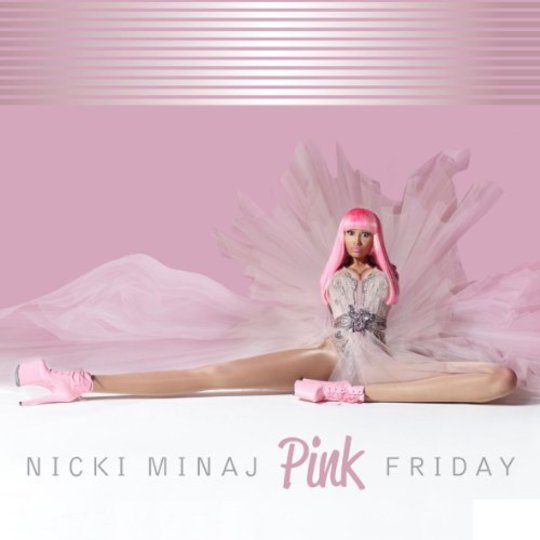 “I am not Jasmine, I am Aladdin” spits Nicki Minaj in the opening bars of ‘Roman’s Revenge’, a violent, aggressive and all too rare moment of truth on the Young Money rapper’s debut album Pink Friday. Having built a reputation on smash and grab cameos on tracks by hip-hop royalty like Kanye West ('Monster') and Lil’ Wayne (Sucka Free mixtape) the anticipation surrounding her debut album proper is only eclipsed by that of West’s ubiquitous My Beautiful Dark Twisted Fantasy itself. For all of Kanye’s undeniable quality however, Dark Fantasy is overwhelmingly a man’s album, one full of bravado, paranoia and testosterone driven egotism. What makes Nicki Minaj so unique is that not only does she stand alone in the mainstream as a female rap voice but that she does so by matching her peers for all their traditionally masculine traits. Minaj’s featuring career to date has seen her drive faster, hit harder and get more girls than all of her male hosts combined.

It is no surprise then that Pink Friday starts in a suitably boisterous mood with ‘I’m The Best’, in which Nicki toasts her success as if the fact she has made a major label, massively anticipated album is her crowning achievement. “You told me I would lose but I won, Might buy some Jimmy Choos for fun” she says, seemingly unaware that this album is in fact her biggest test, not her hall of fame induction party. It’s a disappointing attitude coming from an artist who has always seemed overtly aware of the art of taking your chance and shining the brightest at all times. ‘Roman’s Revenge’ continues the big beat, high octane style Minaj fans have become accustomed to, with Eminem joining the fray. His alter ago Slim Shady hooks up with Minaj’s character Roman Zolanski, going head to head in a furious battle. As confusing as that might sound, what it basically means is that two famous musicians get to face off in a foul-mouthed manner with Slim Shady offering to stick a falcon’s wing up his enemy's backside at one point. It’s wonderfully gratuitous and a million miles away from what you would expect from an artist who has just had a US number one single.

Yes, Minaj – with an alter ego derived from the infamous director of The Pianist, she who shouts “I’m a bad bitch, I’m a cunt” at the start of her album, has topped the charts in America. Sadly it was not with a track like ‘Did It On ‘Em’ which urges people to wave their number twos in the air (trigger fingers, not excrement, you assume) but with the far smoother and sugary ‘Your Love’. It is this Annie Lennox sampling track that ultimately comes to define Pink Friday: an album that doesn’t quite seem to know who to please or how.

Having seen her harder, more intense single ‘Massive Attack’ flop in the States, then watching the subsequent success of ‘Your Love’, Minaj has clearly been led into following the lucrative, commercially viable route as soon as possible. Thus Pink Friday sees Minaj essentially trialling a new sound when she should be cementing her expertise at the style she cut her teeth on. It’s not a total disaster: tracks like ‘Right Thru Me’ and the Rihanna-featuring ‘Fly’ succeed at being both radio friendly yet not too sweet to swallow; but then Will.i.am shows his face. ‘Check It Out’ sees the Black Eyed Peas man turn up like an unwanted party guest, ruining the whole thing with his ‘Video Killed The Radio Star’ sample and gratuitous use of auto-tune. The worst thing is that this is not the most bizarre cameo on Pink Friday - that prize goes to Natasha Bedingfield. Yes, Daniel’s sister crops up on ‘Last Chance’, her first musical appearance of note since 2004’s ‘These Words’ in which she tried to lay some Byron, Shelley and Keats over a hip-hop beat. Had he not been in prison, Minaj’s label boss Lil’ Wayne would surely have made an appearance here... not since Coronation Street’s Deidre Rachid has a jail term seemed so unjust.

Nicki Minaj remains one of the most vital and vibrant character in mainstream music today. Sitting alongside the likes of Katy Perry, Ke$ha and Taylor Swift she is a welcome alternative and Pink Friday will undoubtedly be the most aggressive and confrontational record many 15-year-old girls buy this year. However, it is, ultimately, schmaltzy and sugary, gift-wrapped for the radio playlist controllers of America. Where they should be opening a box to be met by a spring-loaded boxing glove they are instead being met by a neutered puppy chewing on a rubber bone.

Like a cartoon, Nicki Minaj’s mere appearance on a song makes everything 3-D, impossible to ignore and blisteringly exciting. Unfortunately she has chosen a confusing and compromising shortcut to success that leaves this debut feeling more compromised than comfortable. ‘Pink Friday’ wins merely on points, rather than the knockout punch it should have been.