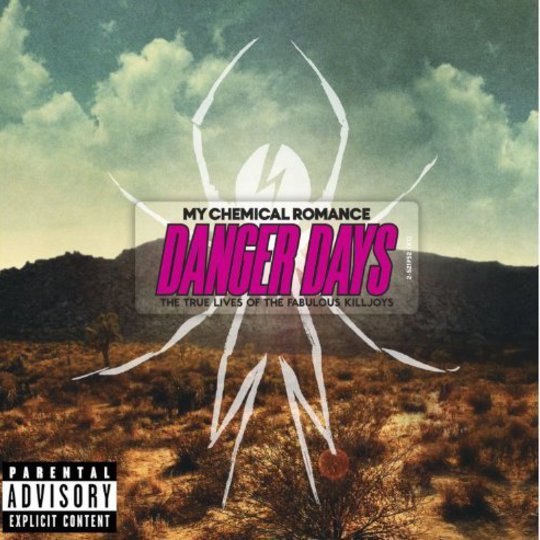 In an oily sea of angler fish, lampreys and bottom-feeders, My Chemical Romance always have been the most intriguing and captivatingly camouflaged fish of the mainstream American rock scene. Their early excursions with gargoyles and guns on the first two records introduced a band who, though capable of playing the fool behind a barrage of power and pentatonics, also possessed a scalpel tongue and twisted wit that set them apart from the shoal. But it was 2006’s The Black Parade that truly defined the vivid gulf between themselves and their peers. A towering, adventurous and (for the most part) brilliant piece of concept rock-opera that managed to defy its myriad potential pitfalls by virtue of its bravery, sheer enthusiasm and above all, its chime of emotional resonance; it should have made My Chemical Romance the biggest band in the world. The fact that it didn’t quite manage it was probably because in essence, The Black Parade was too clever, too tongue-in-cheek to appeal across the board. Danger Days, four years on, is their second shot at the title. But an awful lot of things have changed in those years. Not least My Chemical Romance…

Gone are the strings, pianos, puppets and stage whispers. MCR have chosen to almost completely eschew their theatrics in place of a record that totters between the gothic punk of their earlier albums and aluminium future-pop, neatly reflecting the album's post-apocalyptic drapes. The problem with Danger Days however (apart from the unwelcome, cumbersome and wholly unnecessary ‘Dr Death’ skits), is that in choosing to cast aside the costumes and make up, MCR stumble into a blinking light that shows up every bag and wrinkle in their musical profile. And the predominant failing of the album is that ultimately, it could easily have been released by a dozen other bands.

Having professed as such, opener ‘Na Na Na’ is the album's only true nod to their past excesses. Somewhere between Rocket From The Crypt’s ‘On A Rope’, Hot Hot Heat’s ‘Bandages’ and a freshly shaken can of Red Bull, it runs a gauntlet of hyperactive backing chants and Gerard Way’s insistent yelping to something mildly irritating but irrefutably skilful in execution. ‘Bulletproof Heart’ starts promisingly with a stop-start riff but soon manages to drift into repetitive circles; weighted down with unnecessary hyperbole. ‘Sing’ is equally confusing. Though it speeds out of an icy, robotic fog (Rob Cavallo’s production is, for the most part, superbly applied) and the verses skim along a sleek Depeche Mode railway, the chorus is predictable join-the-dots cliché, searching fruitlessly for gold from base materials. Three songs in, the album is in need of a firm kick-start. This gratefully arrives in the form of 'Planetary (GO!)'. A sleek, electro-glam stomp with Way’s infectious snarl strangling every syllable, it manages to deliver an amphetamine-fuelled boost to the proceedings against a battleground of furious drums, sneering synth and gleeful overkill.

‘The Only Hope For Me Is You’ passes through an artificial stormcloud of faux-anthemics without any notable incident or alarm. ‘Party Poison’ on the other hand, is fantastic. A three minute excursion to joyful exuberance, it rides a juggernaut riff down to a fizzing firework of garage pop-punk that Way spins and spits upon with delight, punching lyrical boreholes through a battery of sound. ‘Save Yourself, I’ll Hold Them Back’ is inconsequential dark-rock finger-painting but the excellent ‘S/C/A/R/E/C/R/O/W’ is a clear winner: Gerard’s voice kaleidoscoped through an echo effect as a cyclical steamroller of guitar and percussion carries your fist from your side into broad agreement. And though they tentatively back out of a potentially glorious ending, all is forgiven by the exquisite ‘Summertime’. For the first time on the record, they get everything right. Making the wise decision to explore delicate and subtler ground, it builds triumphantly into an illuminated contemporary anthem of truly beautiful proportions.

The prettiness of ‘Summertime’ however, is ultimately a flawed and duplicitous seduction. It serves to make the abysmal, sub-Limp Bizket rap-rock of ‘DESTROYA’ even more culpable in its frank awfulness. For a band capable of producing stunning mercurial moments like ‘Disenchanted’ and ‘Helena’, such recourse to lumpen, dirt-scrabbling ugliness is simply inexcusable. From this crude and mortal blow, Danger Days could easily be pronounced dead on arrival. Happily and thankfully, they manage to somehow recover with a dual salvo of resurrection. ‘The Kids From Yesterday’, a clear future single, is a shimmering gem; the band lashing their up their angst to a Killers and MGMT corral of swooning electro-pop. The whole thing concludes with the cartoon riot of ‘Vampire Money’, crashing the party with a battering ram of power chords and a fire extinguisher of wide-eyed mischief to conclude the album on a note of chaotic triumph.

So, what exactly happened here? In truth: nothing much. The sky didn’t fall upon our heads, nor did it light up in showers of electricity and shooting stars. And therein lies the frustration. The Black Parade showed that My Chemical Romance were a band capable of expanding their horizons beyond the scope of the ordinary rock band and delivering a collection of songs that made you want to weep, leap and contemplate your mortality in the same hour of introspection. In contrast, Danger Days is a record that too often passes by with a few cursory nods of the head and the odd prickle of emotion and swell of pride that is soon washed away by another ill-considered chorus repeat or bashful refusal to drive for the summit. It ambles, it slouches; it says little of consequence.