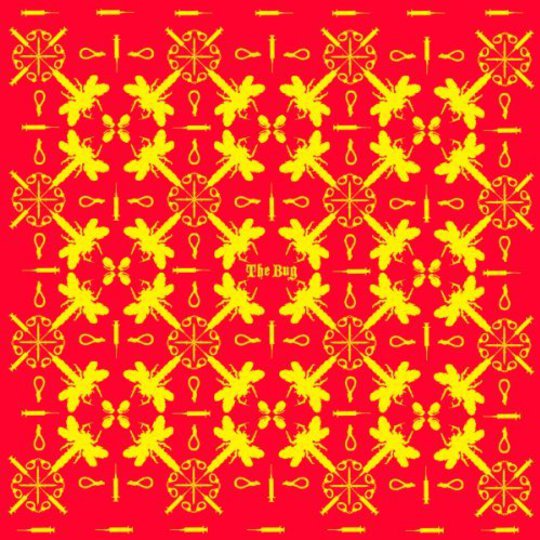 The humour which emerged from the events of September 11, 2001 understandably did so some time after the fact, in the main. However, one of the greatest examples of morbid tastelessness I’ve ever seen took place that afternoon on the Popbitch messageboard, which was readable in those days. The joke centred on eyewitness reports of thousands of loose pieces of paper blowing in the wind post-attacks, and the suggestion that they were flyers promoting the new Victoria Beckham single – in other words, that 9/11 had been orchestrated by Virgin Records’ PR department.

I recall this having learned that one especially notable element of anti-tuition fees demonstrators’ forcible occupation of Conservative HQ last Wednesday (at the time of writing) was a small but effective soundsystem, wheeled into the lobby blasting out ‘Skeng’ by The Bug. ‘Skeng’ appears, in remixed form, on The Bug’s Infected EP, released five days after the riots. Although it’s probably safe to assume that Big Dada did not hijack a day of political insurrection to promote their new single (you might recall how tricky it was to buy the Speech Debelle album in shops just after she won the Mercury Prize, because the label didn’t press enough copies), if it had been a publicity stunt it would probably be up for some kind of award in the near future. It’s vaguely tempting to take a stance of devil’s advocacy and suggest that a song about the cold brutality of modern-day gang violence, and its invariably fatal results, might not be the most apposite soundtrack to a procession of young people protesting the prospect of their parents having to pay £9,000 a year for their university education. On the other hand, it’s a total badman tune with a monster bassline, so two sides to every story and that.

Infected’s four-track duration – one per side of this double 12-inch release – also features a rerub of The Bug’s equally totemic ‘Poison Dart’, courtesy of UK funky mainstay Scratcha DVA, and two brand new tracks. ‘Catch A Fire’ is voiced by Hitomi – a Japan-born, London-based singer whose association with Kevin Martin, the man behind The Bug, stems from her contributions to his largely good, relatively sedate album as King Midas Sound last year. This track bears more resemblance to that record than most Bug productions – not just because of Hitomi’s presence, but thanks to the loping dub-loyalist production style, with analogue-style crackle highly audible. An added point of note is a guitar part contributed by Justin Broadrick, who in addition to his work in Godflesh, Jesu and so forth once made nuclear waste-mutated hip-hop with Martin as Techno Animal. Said part is essentially un-Broadricklike: melodic, almost chiming, and inviting comparisons to Massive Attack circa Mezzanine which are bolstered by Hitomi’s loosely Liz Fraser-y vocal style. “Let’s clean this city with burning flames of fire / Crackheads, pissheads, hoodrats, undead.” Given that written down, this reads like an Earth Crisis lyric, it’s delivered in tender and sympathetic fashion.

Roots Manuva is probably the most high-profile contributor to Infected, and one whose guest vocals Martin has apparently hankered after for some time. However, ‘Tune In’, over which he slathers his insta-recognisable MC style, is the EP’s least distinguished moment. It’s far from awful, and Manuva’s murky, paranoid utterances are as good a match as you’d expect for the track’s verse-chorus reading of doomy halfstep. It just isn’t markedly different from what he was doing on 2008’s London Zoo – which still renders it superior to most dub-based music you’ll hear in 2010, yet it’s on an EP billed as a step forward from that album, prior to an imminent teamup with UK dub veteran Adrian Sherwood.

The remix of ‘Skeng’ mentioned earlier comes from Autechre, who don’t exactly spread themselves thin in this discipline. Happy to report that they do a fairly spectacular job on a track already consumed by darkness, of both the sonic and thematic kind. Applying their granular complexity to ‘Skeng’’s sub-straining basslines, and Flow Dan’s vicious street patois, seems like it’ll require some lateral thinking. But the Manchester duo succeed; the Autechre sound chiefly comes through in the drum patterns, with snares which sound like the proverbial enormous door slamming in the depths of hell. ‘Poison Dart’, like ‘Skeng’ a previous single and London Zoo album cut, finds Scratcha DVA providing, perhaps unwittingly, a useful companion to ‘Catch A Fire’. The dub echo machine is cranked up, the brusque chat of Warrior Queen remains front and centre and you’d find it a little tricky to identify this as ‘UK funky’ in style until some way into the track, when the beats attain the genre’s celebratory house tempo.

Infected isn’t likely to do what London Zoo did, ensnaring broadsheet hyperbolists and people with half an eye or less on British club music. Not least because that demographic only really respond to albums. It’s a strong release, though, with moments which sound a timely reminder of why The Bug has cast a shadow over UK bass music in the last decade – despite being a noise-dude outsider and a moody-looking bugger to boot, he can bash up a dancefloor without it having to conist of chinstrokers. While the Millbank rinseout related earlier on might be of little relevance in the light of day, it does make you fleetingly wonder if the next Bug full-length might capture the mood of grinding anger that several hundred blogs and broadsheet columns have assured us is about to blow.