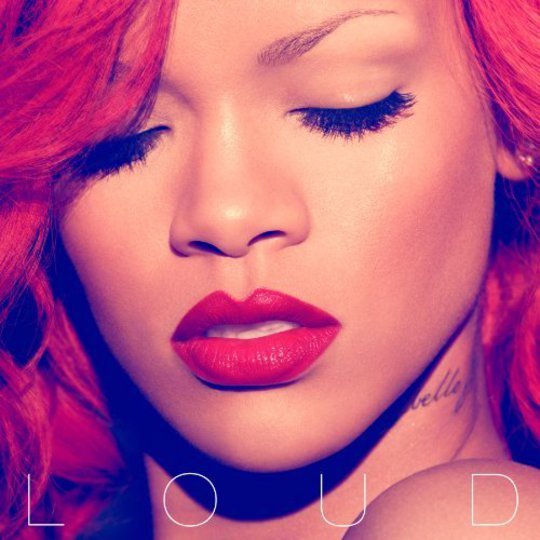 For an album titled Loud, Loud isn’t as LOUD as you might hope. Lacking sirens, klaxons, triple drumming action and most criminally, Busta Rhymes, it’s plainly not quite the relentless party record fans had been foretold of.

It’s more of a mash up of Rihanna’s career thus far, featuring a mix of the dance floor fillers of Good Girl Gone Bad, the slickly produced insular thoughts of Rated R and the Barbadian styling of her earliest singles. Much like her last two albums – and indeed a huge amount of pop records in general - it struggles to maintain a consistent tone of voice throughout (giving her critics more ammunition that no-one has quite worked out who or exactly what Rihanna is), whilst simultaneously not caring and throwing an eclectic mix of awesome singles in our faces.

For instance, after the groundwork laid on (the majority of) Rated R concerning the struggle to regain her inner strength and the persecution from her friends after briefly returning to her ex, it's rather regressive hearing Rihanna drop in a lyric on an inept hip-hop-cum-R&B-by-numbers song about getting it on rather roughly, as she does on the wastefully unsexy ‘Skin’: "No teasing you waited long enough / Don’t hold back you know I like it rough". What should seem like whispered foreplay is the equivalent of an ill-inserted Eighties sci-fi sex scene, with an absolutely baffling electric guitar solo coming in at presumably the point of climax. It actually makes previous low point ‘Rockstar 101’ seem half-decent.

And then there’s ‘S&M’, which is both brilliant and bonkers. Whereas ‘Disturbia’ and ‘Russian Roulette’ hinted at a seedy undercurrent, this effort displays its wares like a proud pimp: "I may be bad but I’m perfectly good at it / Sex in the air, I don’t care, I like the smell of it / Sticks and stones may break my bones but chains and whips excite me". Its impossible to not fall for its catchy charms, but this newly awakened dirty demeanour does sit rather weirdly with Rihanna telling us in interviews that it’s definitely NOT about sadomasochism. On the one hand you could argue she’s got her mojo back and feeling playful, on the other it feels like a slight misstep backwards and out of (her ever developing) character.

Conversely, good pop is often about fictional characters, right? Such as the one she creates on the intriguing ragga ditty ‘Man Down’, concerning a girl who dumps her beau, metaphorically reimagined as one who shoots her lover in a crowded train station. Indeed much of this sassy Barbados-infused material she has striven to include blossoms into many of the record’s more successful moments. Destined to be a future single, her collaboration with Drake and StarGate ‘What’s My Name?’ is a potent mix of posturing and affection, utilising her voice in a manner where many of the syllables flow rather satisfyingly into one another. ‘Cheers (Drink to That)’, whilst a bit generic lyrically, features similar intonations and rolled Rs over a swaggering West Indian verse, whereas ‘Raining Men’ sees her verbally sparring with Nicki Minaj in a manner which will probably get sadly overlooked as a lead track but which will likely find favour with fans of ‘Breaking Dishes’.

The mid paced yet oddly decent ballads which Rihanna usually excels at desert her somewhat on Loud; ‘Complicated’ is inoffensive enough but just wholly forgettable, whereas ‘California King Bed’ is quite simply the most vile thing she’s committed to record in the last four years. At any point you would be well within your rights to expect Nickelback to join in and after this review is done, I intend to cleanse my computer of it forevermore. ‘Fading’ manages to partially break the shackles of her former glories, though still looks some way off challenging ‘Rehab’ or ‘Hate That I Love You’ for a place in a live set. That honour falls to closer ‘Love the way you lie (Part 2)’, a follow up to her duet with Eminem but with her taking the lead viewpoint and vocal. It defecates all over the first instalment, partly because the faux angst ridden rant of Mr. Marshall Mathers III is reduced to a mere 30 seconds or so but mainly because it’s stripped back to its bare bones and features Rihanna delivering her most soulful and well-judged vocal to date. It’s the finale that Rated R deserved (for a multitude of reasons which will become apparent when you take in the words), but which rather unfittingly Loud pulls out of the bag instead.

And it’s a mixed bag all right. At times brilliant, at others unlike anyone else out there and occasionally frankly a bit rubbish. As ever, the world still isn’t much clearer on who Rihanna is or where she’ll go next, but it's fun trying to work it, no matter how futile.