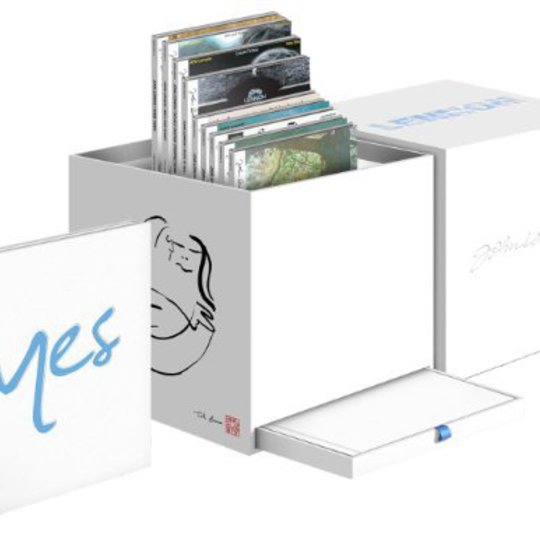 When Yoko Ono recently gave the thumbs up for Citroën to use some rather dubiously spliced together footage of a long-haired John Lennon appearing to dis Sixties nostalgia in favour of 'starting something new' (cue Citroën’s latest 'anti-retro'-mobile bouncing across the screen), Sean Lennon defended his mother against accusations of squeezing Lennon’s financial pips perhaps a little too hard, tweeting 'intention was not financial, was simply wanting to keep him out there in the world'. It’s easy to be cynical about such vindications, but with Yoko giving a summer nod to Montblanc to produce a limited edition John Lennon fountain pen (complete with a 18k gold nib bearing a CND sign), it seems cynicism is probably the best response to these things. Given that he would have turned 70 this week had he not been shot 30 years ago come December, it’s hardly a total surprise that some sort of cash spinning memorial project would materialize.

Hawked as a 'sweeping catalogue initiative overseen by Yoko Ono and EMI', the Gimme Some Truth Campaign is exactly the type of sprawling multi-disc, glossy leafleted affair expected in such circumstances. Consisting of a new hits compilation, a four CD set of themed discs, a newly remixed version of 1980’s Grammy Award-winning Double Fantasy, and an 11 CD Signature Box of Lennon’s remastered back catalogue plus rarities, the accountants certainly can’t be said to lack chutzpah. But to disregard this project purely on the grounds of its blatant opportunism would be a shame, for there’s definitely something here that succeeds in 'keeping him out there in the world' - even if it’s simply reaffirming Lennon’s oft phenomenal solo talent.

Worked on by the same Abbey Road engineers who headed the remastering of The Beatles’ back catalogue last year, the freshly scrubbed up recordings presented here offer a similarly cohesive tone. Yet in contrast to the easily identifiable variances evident on the reworked Beatles albums, most distinctions here remain largely academic - some cleansed background hiss here, or an occasionally sharper guitar solo there. The ‘remastered’ tag seems little more than a rebranding exercise. In fact the ‘stripped down’ version of Double Fantasy, the most conspicuously altered record here, sits rather awkwardly alongside its original box partner, sounding less cluttered yet colder and somehow more abstract than its initial incarnation – a pity given the effectiveness of 2003’s Let It Be... Naked in immaculately reimagining a Lennon focused release. Once one realises that trying to play spot the difference between the two sets of records is actually pretty pointless, the whole package becomes a lot more satisfying, for here are eight full length records highlighting some of the finest songwriting of the past half-century, music that still sounds surprisingly fresh when compared to the ubiquity of most Beatles recordings.

Inevitably it’s Lennon’s strongest LPs that dominate proceedings, with the raw intimacy of John Lennon/Plastic Ono Band and the timelessly vehement Imagine rather overshadowing the somewhat more hit and miss efforts of his later years. Though as these two bona-fide classics give way to the more ramshackle offerings of, say, 1974’s Walls and Bridges the value of an ordered chronological collection becomes apparent, for it brings to light the complex evolution of Lennon’s post-Beatles mindset. Part hippie, part punk, part working class poet, part wealthy rock star, a decade’s worth of often contradictory thoughts, ideas and emotions are tackled with a refreshing directness increasingly absent from contemporary artists’ more oblique personal reflections. From the McCartney-bashing ‘How Do You Sleep’ to the lovesick reverie of ‘#9 Dream’, here is the sound of a man attempting to make sense of conflicting public and private pressures, completely unafraid of presenting his genuinely candid inner turmoil to fans and critics alike. Wrapped in amongst some of the most original pop compositions of the post-Beatles era, eight reissued albums of such sincere gems act as a timely explanation as to the quasi-religious status of Lennon as a musical icon.

Quite why it is felt necessary to then pollute the reissue of his LPs proper with a confused selection of hits and rarities releases is an issue probably best clarified by Yoko’s bank manager, as they certainly do little to refine the Gimme Some Truth Campaign‘s conception of quality control. A new hits compilation entitled Power to the People is stuffed full of Lennon’s strongest tracks but offers nothing distinctive from the previous ranks of such anthologies, and the three disc collection of studio outtakes and rare live performances are pretty uninspiring to all but the most obsessive. But it’s the four themed discs that violently herd 72 tracks into crude brackets of love songs, political songs, influences, and yep ‘songs about life’, that really scar this already somewhat contentious campaign - a pointless act of blunt categorization that underscores the vapidity of a project motivated by money over music. Still, despite the fact that the art of an essentially unmaterialistic man has once again been milked for a few more fur coats and cocktails, it would be foolish to let a want of money obscure the music. Especially when you’re talking abut some of the most exceptional pop music ever recorded.