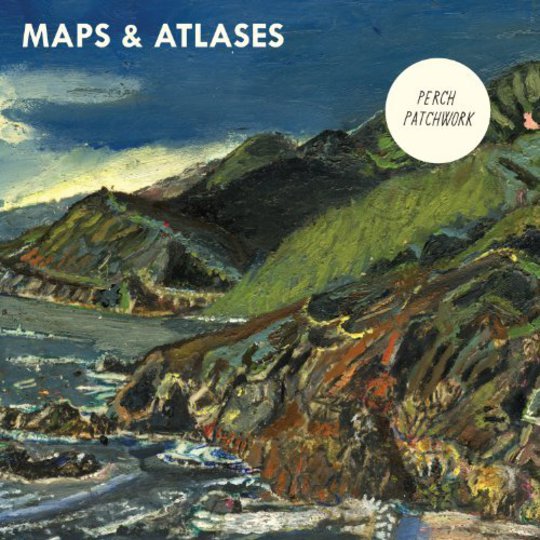 Chicago has fallen in love with local boys made good Maps & Atlases, but it remains to be seen whether their full length debut Perch Patchwork will woo the rest of us. Mixing intricate fretwork, nimble rhythms, and tart melodies, the album serves up 12 treats that are almost too sweet to eat. The foursome has always trod perilously close to self-conscious twee limbo (a common enough fate for ex-art student bands) though the grime of Chicago’s underground scene has done a decent job of cutting their postures with a little sweat. Until now. With increased exposure (recently touring with Foals) and a full album to promote, it’s a coming out party for better or worse.

Perch Patchwork is the album you knew Maps & Atlases had in them. Their first EP, Trees, Swallows, Houses, showcased brilliant breakneck musicianship, folk textures spliced with world rhythms, a sort of hick Yeasayer. Second EP You and Me and the Mountain took a more leisurely approach, teasing out their compositions in a more masterly fashion, neither a slave to pop design nor disdainful of a certain catchy verve. Here, Maps & Atlases take the best of both earlier efforts and produce an album that’s intensely listenable without, surprisingly, being at all gripping. Some have compared the band’s sound to the venerable Can, though another sometimes-aired comparison, Vampire Weekend, is more accurate. Like their Big Apple brethren, the boys from the Windy City lend their music a patina of musical eclecticism by copping world rhythms on songs like ‘Living Decorations’ and ‘Israeli Caves’. Not that Maps & Atlases are disingenuous in their delivery, but there remains a persistent and unshakeable feeling that Perch Patchwork is everywhere at once, and nowhere at all.

Fans of Maps & Atlases will savor some of David Davison’s most restrained vocal performances to date. The lead vocalist was born to front a band, with a voice that’s most comfortable in the stratosphere but can descend to street level when circumstances permit. His nasal textures have a charming pop lilt reminiscent of Buddy Holly when he keeps the tiller straight and doesn’t overindulge. ‘The Charm’ is a particular success vocal-wise, and a beautiful love song to boot. The lyrics “I don’t think there is a sound I hate more/than the sound of your voice/when you say that you don’t love me/anymore” combine just the right amount of love and anguish to avoid syrupy sentimentalism. Also, the superb percussion can’t pass without mention. Despite stellar guitar instrumentation, the drums have always been the strength of Maps & Atlases, allowing the band to slip effortlessly from timezone to timezone in search of their musical selves.

Ultimately Perch Patchwork has some good pieces that just don’t combine to make a great album. It’s hard to call a band that is just releasing its debut full length ‘overcooked’, but that’s exactly what some of these tracks sound like. Case in point, the title track, which sounds dangerously similar to late period Dave Matthews Band. Not what you want out of a young act in 2010. Maps & Atlases have too much talent to sink into oblivion based on a so-so album, so expect a second full length release, and expect it to be better.