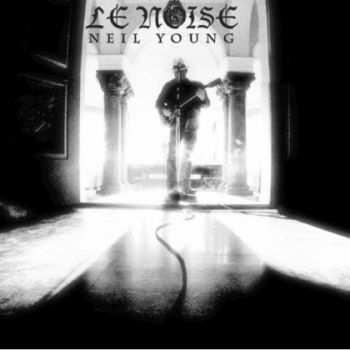 Even for existing Neil Young fans it sounds strange – rootless and untethered, emotionally very melancholic and reflective but with such an aggressive musical edge.»

neil young releases brand new solo album entitled 'le noise' on reprise records. this eight-song album is a collaboration between the acclaimed rock icon, songwriter and musician and producer daniel lanois, known for his work with u2, bob dylan, peter gabriel, brian eno, willie nelson and many others. as producer or co-producer lanois won grammy awards in 1987, 1992, 1997, 2000, and 2001. writing about le noise after hearing it at lanois' home, the los angeles times commented: "what's striking about 'le noise' is the way it both summarizes and distils young's singular approach to music, predominantly just neil and a guitar: his big, white hollow-body gretsch electric slashing and burning for most of the tracks, a couple built around picked and strummed acoustic instruments. both are recorded and amplified - literally and metaphorically - by lanois' signature soundscapes that loop vocals, and enhance the guitars' bass notes through distortion boxes, synthesizers and other electronics."
description from www.roughtrade.com