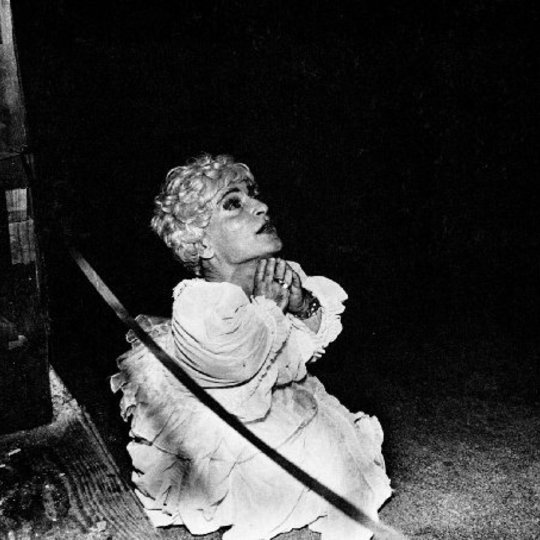 Bradford Cox is not particularly famous, which I sometimes think is a pretty strange thing. I mean if you were absolutely forced to go out and identify a bona fide genius from the current indie generation, you have to admit you wouldn't be on totally shakey ground with the man. Certainly if you simply looked at the reviews his records for Deerhunter and Atlas Sound had notched up and then noted his sheer prolificness – six albums since 2007 – you would probably come to the conclusion that here is one of the most fêted performers of the present day.

Instead he’s kind of a big cheese in certain ATP-ish circles, and he’s certainly not languishing in obscurity, but he’s not wound up on too many magazine front pages either, while his fanbase is less obsessive than you’d maybe expect, tending to regard his unusual appearance and prodigious gifts with a sort of proud fondness rather than froth-mouthed adoration.

The reason, I think, lies in the fact that the constant, defining qualities within Cox’s shifting music vistas are a sense of absence and an air of nostalgic longing. These are not the things that make for fist-pumping, generation-unifying anthems, and can genuinely be quite distancing. If Microcastle - and even to some extent Logos - suggested that Cox was beginning to encroach upon more conventional musical territory after Deerhunter's abrasive beginnings, then Weird Era Cont. and Rainwater Cassette Exchange pointed to a band breaking into much quieter waters, continuing to cool the tumult until, finally, absence and nostalgia were the loudest sounds.

And so it’s proven with Halcyon Digest, a record steeped in nostalgia and groaning with absence. The very first line of the opening ‘Earthquake’ is “Do you recall?”, there's a song called ‘Memory Boy’, and Cox’s most notable retro fixations are united upon ‘Basement Scene’, a gorgeous Fifties-style ballad about the Eighties punk and DIY scenes. And the absences are everywhere. Absence of noise, in terms of volume. Absence of noise in terms of the sheer number of silences and empty spaces that roost in the gaps between languorous beats and trickling tangles of guitar. There’s the absence of Cox’s friend Jay Reatard, to whom the closing ‘He Would Have Laughed’ is dedicated. And there’s the absence of Cox himself – his voice is as quiet and ghostly as it has ever been, and gone entirely on ‘Desire Lines’ and ‘Fountain Stairs’, two songs written by Lockett Pundt.

Where formerly the band might have applied tension here via the means of scabrous guitars, on Halcyon Digest it instead comes from Ben H Allen’s magnificently crisp production. ‘Revival’, for instance, may be based around an incorporeal Cox declaring “I am saved" in unsettlingly blank tones, but its verve and energy comes from the spectacularly confident music, an immaculately crafted lattice of percussion that tumbles forward with the precision tooled sangfroid of modern R&B, yet somehow sounds more akin to some moonlit old folk ritual. On ‘Earthquake', Cox's languidly frustrated pleas for memory to come float like lazy motes, frozen in a moment constructed from a single massive, processed beat that pulses in and out of existence slowly, its serenity disturbed only by drowning tides of aqueous electronics rising up almost imperceptibly. ‘Memory Boy’ is powered by a jaunty, C86-style guitar figure, but it founders eerily in the dense fog of Cox’s crepuscular reverie. ‘Desire Lines’s shimmering, hummable chorus is counterbalanced by a dreamy four minute guitar outro – much of it three simple notes, plucked over and over – that drags the perkiness of Pundt’s song into the same well of memory and half remembrance as Cox’s music.

And that’s the thing: while Deerhunter may not be a solo project – though a couple of the songs here were recorded solo – this band is the musical realm of Bradford Cox. And if he hasn't found the same amount of fame as Win Butler or even Avey Tare, then probably it's because the lethargically gorgeous world he has crafted isn’t inclusive enough allow large numbers of people in. I mean, what are his songs really about? His memories, his thoughts on memory; all we get are flashes and images, the dots near impossible to join. We only even know ‘He Would Have Laughed’ is about Jay Reatard because Cox has said it is; it’s a haunting track, yet the line that sticks is “I’m a gold digging man”, a weird admission of what? Survivor’s guilt? Doubtless people will sing along to the song when it’s played live, and still none of us will really understand much beyond the vague unease it stirs.

Yet I think conversely it’s Cox’s inability to totally connect to an audience that makes him such a spectacularly special songwriter. While it’s understandable that there are people who prefer the poppier Microcastle or the louder Cryptograms era, the fact is that Cox still hasn’t crafted a definitive Deerhunter record, one that’s left his control and been taken by his audience at large as everything his band could and should be. Deerhunter have no Murmur or Doolittle or Funeral to weigh them down; Bradford Cox floats clear of all that junk - he may well do so forever.