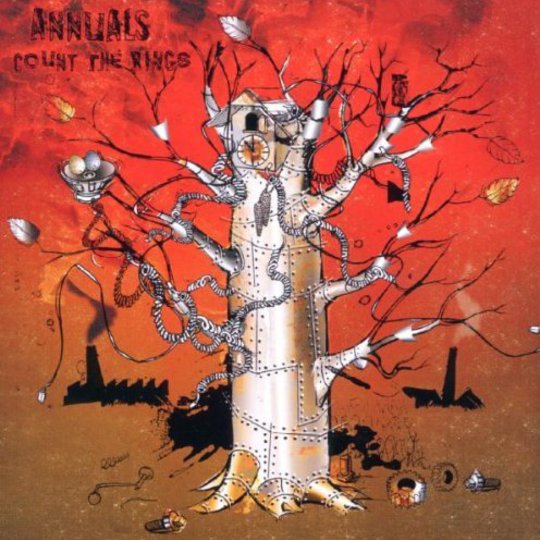 Those of us based in the UK won't have heard much about Annuals in recent months, likely presuming their last release to be their promisingly grandiose debut Be He Me back in 2006. But the band have been busy in the intermittent period, releasing various EPs and a follow up record Stateside. To make up for depriving us Brits of legitimate access to this period of creativity, Count the Rings arrives with a selection of tracks from those various releases alongside a few tantalising new morsels. And as such, we have here before us a record of 'songs' and ideas, rather than a coherent album.

It's a collection of experiments and ideas that yields some interesting results - and ones which could well come to shape the band's future career path or setlist encore; they just don't ever gel to form a coherent album.

Opener 'Eyes in the Darkness' strikes an impressive balance between the soaring choruses which trademarked the band's first foray and the instrumental experimentation which followed it (once the rather ill-fitting intro is dispensed with). 'Hot Night Hounds' delivers on the band's ability to craft anthemic choruses with truly beautiful results, 'Turncloaking' manages to be heartfelt yet haunting and the closing 'Holler and Howl' strikes that difficult balance between fun and complex, which a few other tracks here strive for but fall short of. However it's not all as well judged; 'Hardwood Floor' (in particular) and 'Springtime' desperately want to clutch those emotional heartstrings but end up feeling like derivative chart fare (though the latter's ending is very good indeed) and the slide guitar production on 'Loxstep' and 'Always Do' cheapens what are fundamentally rather decent pop songs.

In fact it's only the odd bit of genre merging misstep or over-bearing layering that let the record down, rather than the band's inherent abilities. Although one further criticism would be that many of the tracks included arrive at the 'juicy' part of the song a bit quicker than their musical peers might do, meaning that they don't quite have that certain something which elevates them into that 'epic' arena they aim for. Indeed, sometimes the material becomes overwhelming so rapidly, that it leaves you (somewhat conversely) with a sense of feeling a tad underwhelming due to its early ejaculation.

For a band so young and musically virile, Annuals exude a charm and songwriting ability which is way superior to what would normally be asked of them, hence it feels rather unfair to criticise them so. Yet due to sharing character traits with the likes of Broken Social Scene and Arcade Fire, expectations are seriously lofty amongst fans of rousing refrains and singalong outros. Ultimately, for the band to truly stand out, they need to work with someone who'll help discover their unique voice amongst all the ideas, over-production and talent the band put into every one of their releases.