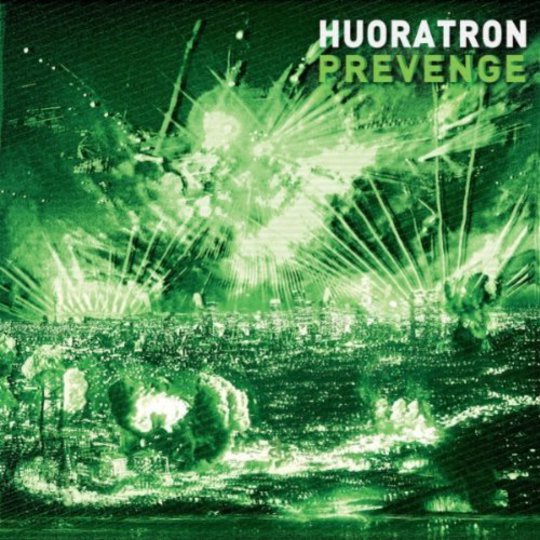 I'm not sure how much is known around the world about the Finnish producer type fellow named Huoratron, aka Aku Raski. Most likely not a great deal on these shores, this being his debut UK release. Judging solely by the picture accompanying the press release he's a very stern man indeed. He has more than just a bit of the Charles Bronson about him – the serial killer, not the film star. Still, all you need to know about his music is laid fairly clearly out on the table almost instantly, no holds barred.

This seven-track EP (six originals and a remix of 'Corporate Occult') is not a record which eases into things, past about the first half-minute, in any case. You're hit hard from the very start of opener 'Corporate Occult' with a pummeling beat, which quickly morphs quite unsubtly into a movement which could classicaly be drescribed as “all bells and whistles” in the crudest way. It's not suitable listening if you have a headache. In fact it perhaps even sounds like a headache.

When discussing this type of music – I guess some might call it chiptune – there's always a temptation to talk about archaic and antique computer systems and the music's resemblance to such. Often that opportunity is not passed up but it would be amiss to not mention how Rasku started his compositions way back when on two Nintendo Game Boy consoles. It's a bit more advanced than that now, though. It's also fair to say that the primary aim of the music is to make you want to move your feet and body in unison, and it resoundingly achieves this constantly, although the it's not the sort of dancing you'd want your parents to see.

When 'Gbay's (I dunno, eBay for gangsters?) roughness kicks in it's a release of monumental proportions, though it definitely takes its time coming about in a wall of distortion and squeaks, as with much here. Likewise the buzzed-up modemified '$$ Troopers' throws in a few genuine surprises but it moves from organised chaos into coherent noise, surely and steadily. Again and unforseen and detached break strengthens both what came before and what comes after.

There are few breaks for breath and because of this the record's qualities and negative points are accentuated. If you're going to drill a beat and bass into people's brains then it makes sense to ram it home, and rammed home it is from start to finish. Yet, you do want at least a slight movement away from the ADHD unpredictability of it all – not even for one track, but a few minutes. This doesn't materialise and, upon reaching the final few beeps of the relative calm of 'Trolls' you're likely to let out an exhausted but satisfied sigh, then maybe give it another go.