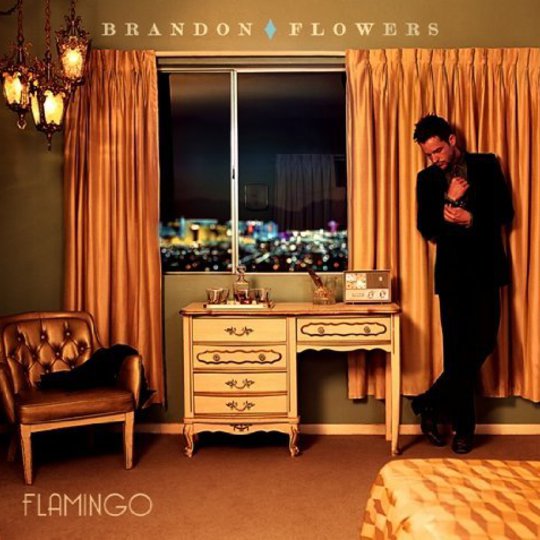 A Brandon Flowers solo album seems simultaneously inevitable and pointless; if the other three (no offence guys) are willing to indulge their frontman’s penchant for choruses pondering deeply ungrammatical quandaries such as ”Are we human, or are we dancer?”, you get the feeling that they would equally oblige to indulge any musical flights of fancy he might have. On the other hand it wouldn’t be entirely surprising if Flowers decided that he could pursue his musical ambitions on his own, such is his self-assurance. Yet Flamingo was borne not of his solo ambitions, nor of any intra-band friction, but rather of his eagerness to get the songs which he had for the next Killers album committed to tape while the group took an extended.

Despite a team of producers, including Day and Age's Stuart Price and U2 cohort Daniel Lanois standing in for the other three, it’s pretty darn obvious that these songs were written to be on a Killers album. There are no huge musical surprises. In fact if anything Flamingo feels like it would be a pretty natural progression for The Killers; as Sam’s Town saw them bulk up the anglo-centric tendencies of Hot Fuss with some All American Boss-inspired bombast and Day and Age saw them lean a little further towards their debut again, Flamingo would have seen them go American again, specifically through a nice big dollop of country schmaltz. Indie-country dame Jenny Lewis lends her ripe lilt (and overshadowing Flowers in the process) to the slide guitar laden chorus of ‘Hard Enough’, which is otherwise saturated in gloopy keyboards. In fact slide guitar features heavily throughout the album, seemingly as a signifier of the album’s provenance, Flamingo Road in Vegas being of personal significance to Flowers.

Album opener ‘Welcome to Fabulous Las Vegas’ sounds like the distillation of Flower’s vision of Vegas. His habit of providing clichéd lyrical signifiers actually sort of succeeds in conveying the decadent sensory overload, all ”Harlots” and ”neon encrusted temples” as verses of dusky slide guitar swell into choruses of crashing powerchords adorned with plumes of synth strings. It’s all a bit silly, but fine, until we get to the bit where Flowers gives us the oh-so-profound warning ”Didn’t nobody tell you the house will always win” followed by a stadium-ready guitar solo.

There are moments where the bombast is really quite thrilling, where it manages to stay (often only just) on the side of good taste. Despite its ridiculous title and hackneyed gambling metaphors ‘Jilted Lovers and Broken Hearts’ is a hard to resist denim-clad fist raiser, with lyrics suggesting some sort of lunar equivalent of ‘Mr. Brightside’, ”When I saw you dancing on the moon now, I watched him spin you round and round.” In comparison lead single ‘Crossfire’ falls flat on its poe-face with Edge-style guitar histrionics and Flowers’ vague (almost evangelical) religious statements such as “Tell the devil that he can go back from where he came” and just plain nonsense like ”Our dreams will break the boundaries of our fear”.

The most out-and-out country track is the plodding ‘Playing With Fire’ wherein he proves he doesn’t have the pipes to do proper country balladeering, but on the choruses proves himself to be quite capable of a sultry Chris Isaak-style falsetto buffeted by some manically wonky slide guitar. At almost six minutes it outstays its welcome, but you have to admire the sheer gall of how in that time Flowers manages to reach an entirely overblown epiphany of billowy keyboards before ease into a short honky-tonk passage. He’s certainly got ambition and even when it’s a car crash of style and sentiment it’s occasionally fascinating too.

So what would the other three Killers have actually brought to the record had they not been on hiatus? Despite the newfound taste for country pop, Flamingo ultimately has the feel of a Killers record in almost every aspect. It could simultaneously be Flowers’ most experimental and middle-of-the-road effort to date, but perhaps the most obvious thing it lacks is a couple of killer singles (pun unintended). The brilliant ‘Magdalena’ has a catchy vocal refrain, but it’s a perhaps a tad too jangly and wordy for the pop charts, while gorgeous ballad ‘Only the Young’ is too much of a slow-burner. They would be amongst The Killers’ best songs, but none have the immediacy of ‘Mr. Brightside’, ‘Human’ etc and certainly none of the dancefloor potential.

If the other Killers allow it, Brandon Flowers has brought a few decent additions to their greatest hits set, but cull those three or four tracks and what remains is an occasionally interesting, sometimes unintentionally hilarious mess of a concept album that’s about as tasteful as the city that inspired it.