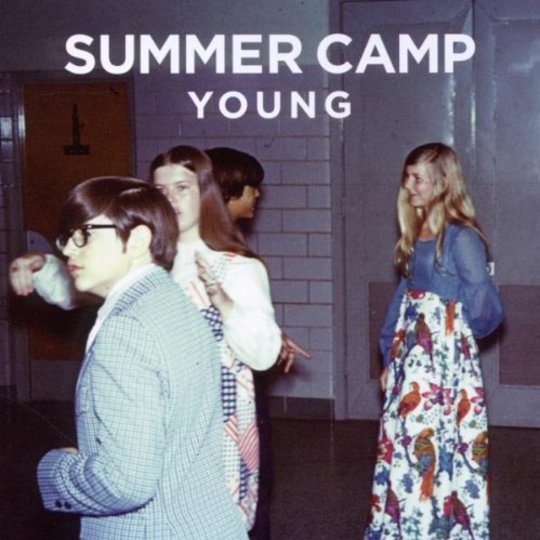 As the summer trickles to an end I’m finding it hard to reflect on the season’s musical offerings without my thoughts being hazily clouded as if filtered through an internal Hipstamatic brain-app. Around the blogosphere in the last few months the embrace between lomography and music has never felt warmer, with over-saturated polaroids accompanying many a fuzzy, washed-out MP3, whilst the term chillwave has practically screen-burned itself onto my monitor.

And so, when the delightfully attractive press release for Summer Camp’s debut EP Young popped through my letterbox I felt a curiously warm sense of ambivalence. On the one hand there’s something comforting about Jeremy Warmsley and real-life girlfriend Elizabeth Sankey pictured together, cardiganned (of course) in timeless Polaroid hue. Plus there couldn’t be a more welcoming home for such a band than Moshi Moshi, who already count boy-girl bedroom aficionados Slow Club amongst their roster. But as a big fan of Jeremy Warmsley’s two solo albums I hoped that he hadn’t traded eccentricity for conformity, surrendering his whirlwind musical imagination to the whims of a passing trend.

I needn’t have worried. Sure this is woozy bedroom pop, and these six songs artfully weave a twenty minute sonic hammock that you’d happily lounge in all day, but there’s something darker and more alluring at work here. "My brother's huge / he’s gonna take care of you/ don’t tell me to calm down or I’ll make a scene" comes the seductive warning in ‘Was It Worth It’, with unhinged paranoia rippling through the foggy production. Then in a moment that captures all the fuzzy confusion of being young and alive the chorus pirouettes from the broodiness with a giant sigh of vulnerability. "It makes me feel so down / Like I’m gonna die / If we weren’t at your parent’s house I’d probably cry" soars beneath a confetti-shower of twinkling synths - it’s a glorious moment.

Elsewhere there’s a bleary-eyed haziness to the EP that gives you the impression it was recorded from underneath a winter duvet. It’s hard not to imagine the pair huddled together next to a stack of Eighties VHS tapes bashing-out songs like ‘Veronica Sawyer’, but it depends on how cynical you’re feeling as to whether this is necessarily a good thing. This song, named after the girl from Heathers, also references Teen Wolf, Polaroid cameras and has the repeated refrain "I’ll never be young again". Undoubtedly this is going to set some people’s contrive-o-meters off, but these songs never feel twee or insincere. Young just feels like two people having fun, exploring interesting electronic sounds and making exactly the sort of music they want to hear.

‘Round The Moon’ is the single, and is the only song where Jeremy Warmsley takes main vocals. This kind of feels like a missed opportunity, as when Sankey chimes it elevates Summer Camp to disarming levels of messy boy-girl blissfulness. Elsewhere ‘Why Don’t You Stay’ is three minutes of aural sunstroke, "Think back to the summer / days went forever", sings Sankey, stretching out the drawled vocals as if she’s about to faint. The music here typifies the sound of the EP, a slightly detuned melody sways, there’s the odd flat-sounding note, and the whole thing sounds like its struggling to stay on its feet after drinking a little too much cheap wine. It’s this genuinely youthful spirit that makes this EP such a treat. Young is incredibly likeable, and by the time the chorus of ‘Ghost Train’ comes around the band have established themselves a sound that’s so genuine and pretty it dispossesses you of any cynicism and pulls you into their world of fuzzy bewilderment.