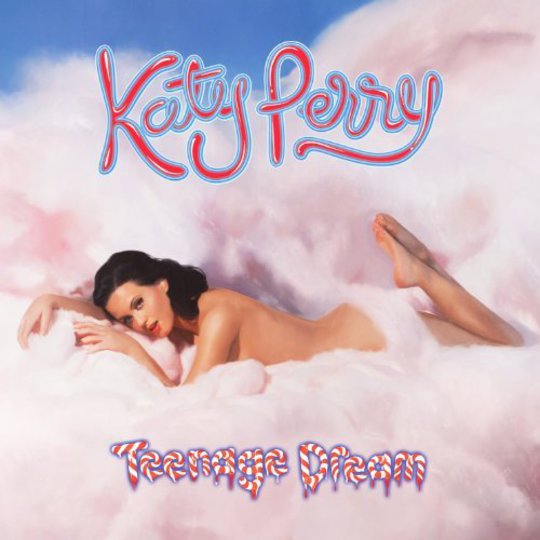 I realise that I’m in an odd position when it comes to reviewing this record. It occurs to me that the vast majority of people reading this will have already formed an opinion on Katy Perry. Not only that, most people have probably already heard ‘California Gurls’ the lead single from Teenage Dream. In fact most people reading this have probably clicked on this review hoping for a scathing indictment of the crimes against music that are contained within Teenage Dream. Maybe you’re hoping for some hilarious digs at Miss Perry’s expense. Or maybe even you hoped to read a well thought out critical evaluation of Teenage Dream’s relative merits and flaws. Whatever you’re expecting, you’ll have already made up your mind before you started reading. Going back to my assumption that you’ve heard ‘California Gurls’; if you liked that, then you’ll probably like about half of Teenage Dream. If you didn’t like ‘California Gurls’ then don’t bother listening to Teenage Dream. Unsurprisingly, the best bits of Teenage Dream are very close to ‘California Gurls’. It sounds like an album built around four or five possible singles and then a lot of filler. For a pop record it’s surprisingly unremarkable.

The most interesting thing here is the lyrics. Taken out of context, they’re not wholly remarkable and say little more then the typical lyric fodder of aren’t boys great, aren’t boys dumb, I like drinking in clubs, yadda yadda yadda. But when you put them in context with Katy Perry the popstar it becomes obvious that half of the songs were written before she became Mrs Russell Brand, and so more than likely deal with her break-up with that ball bag from the musical abomination Gym Class Heroes, and the other half are all about her new relationship with the guy who decided it would be a good idea to go to work dressed as Osama Bin Laden on the day after the September 11th terror attacks.

One of the songs that falls into the latter category is called ‘Peacock’. It sounds a hell of a lot like ‘Mickey’ by Toni Basil and features the refrain “I want to see you peacock”. This may seem pointless written down, but what Katy does is repeat the last syllable of the line so that it sounds like she is saying the word “cock”. But she isn’t. She is saying, “peacock”. Do you see what she did there? Can you imagine anything so wacky, so edgy as that? It seems that a pop star has written a song about wanting to see a man’s penis. It is probably about Russell Brand’s penis. I, for one, am shocked. I would put very good money on it being released as a single. It’s just a shame that there are no animal names that end with –ina, otherwise there could be a great response song to be made.

My main problem with Teenage Dream is Katy Perry’s voice. It’s horrible. It’s overly theatric, nasal, whiny, full of unnecessary warbling. It’s like a horrendous mix of Christina Aguilera’s incessant vocal dive-bombs and the girl from Paramore’s awful fourth wave pop-punk, valley girl snarl. It’s like nails on a chalkboard. I dislike it, which is a problem for a pop singer as that’s all they’ve got. I guess the next problem with Teenage Dream is how boring it is. The songs mostly range from the forgettable to the poor. One song sounds exactly like ‘All The Things She Said’ by T.A.T.u. ‘Teenage Dream’ ‘Last Friday Night’ ‘Hummingbird Heartbeat’ are all as good (or bad) as ‘California Gurls’, and will all probably be released as singles. The rest of it is mostly filler. Really, it’s a waste of time. If you’ve heard the singles, which you probably have, then you’ve heard the best Teenage Dream has to offer.

As I said above, I’m working on the assumption that you’ve all heard ‘California Gurls’. If you like that song then you will like about half of this record. But this review doesn’t matter. You will have already made up your mind before you read this.