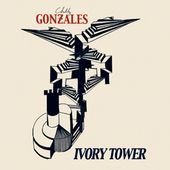 As ever with Chilly Gonzales, here is a record that is entertaining, but lacks a coherent enough vision for it to add up to something truly great.»

rough trade exclusive with a bonus mix cd called 'pianist envy'. chilly gonzales returns with his first official uk full length release since 'solo piano' in 2006. 'ivory tower', an ambitious, intelligent and typically of chilly, fun album, is also companion to a feature film of the same name starring tiga and peaches as well as himself. the ambitious project confirms gonzales as the musical genius and legendary all-round entertainer he's always claimed to be. 'ivory tower' is a total musical u-turn as gonzales delves into euro pop with a smattering of his piano talk show style ballads and some stunning instrumental pieces that double up as the film soundtrack.
description from www.roughtrade.com