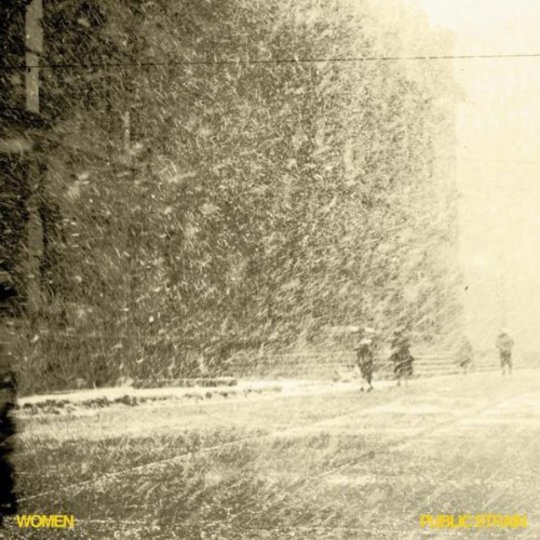 I’ve owned Women’s second album for a couple of months now, and while I’ve listen to Public Strain all the way through on a more than purely professional number of occasions, I’m going to have to be honest and say that closing song ‘Eyesore’ has completely distracted me. Good old last.fm suggests that I’ve listened to it via electronic means a solid 29 times, a figure I know to be a gross understatement (but why won’t it scrobble, eh?). It’s a song that has so mercilessly, ungratefully, dare I say cuntishly colonised my day-to-day thoughts that it’s pretty comprehensively thrown off my entire perception of this record. As a result I probably shouldn’t even be writing about Public Strain as a while, but y’know, here we go...

So anyway, the song ‘Eyesore’. For starters, the fine folks at Jagjaguwar are offering it as a free download, so what you should indubitably do before reading any of this crap I’ve written is click on this link and listen to the song in question.

If you must read more: Women have thus far only written one pop tune, that being their self-titled debut’s ‘Black Rice’. Okay, it had a singalong chorus that was impossible to sing along to (by dint of being totally indecipherable). But it was still a pretty hummable verse-chorus-verse jobbie, the type of thing you’d hear in an indie disco, should such things still exist. ‘Eyesore’ is indubitably not a pop song. Nor, for all Public Strain’s relative softness next to Women, will you find anything desperately catchy here. I mean, there are moments. The singer’s repeat murmurs of “can’t you see?” on the opening track of the same name will get in your head (the singer being Matt or Patrick Flegel, or Chris Reimer, though if you can differentiate between them we should swap jobs). ‘Narrow With the Hall’ may have a pretty fearsome drone bending through it, but the harmonies recalls some pretty, olde English folk ballad, particularly the line of “in this place you call your home”, which bursts out of the feedback-saturated murk with something like exuberance. If you’re of the opinion that Movement-era New Order is toe-tapping stuff then ‘Untogether’ is a definite standout, one of the few moments on the album not stuffed with sound, a sublimely creepy clearing in Public Strain’s mist-wreathed forest. And not only is virtually the entire lyric to ‘Locust Valley’ possible to make out (if not understand) then it ends in some of the most gorgeous “aaaah aaaah”s you’ll hear all year.

But the thing about ‘Eyesore’ is that it comes closer to resolving the ambiguities at the heart of Women than anything else they’ve done, to explaining why these Canadians are so compelling. Because really, what is the exact appeal of this undeniably appealing band? Drones, folk textures, darkness, light, layers and layers of noise, ominous instrumentals that sounds like blood buzzing in your ears (‘Bells’), motorik grooves that blow up and resettle (‘China Steps’); these are all great things, but that can't be all there is to it. Women write songs, but they tease us by keeping them hidden, interspersing the teeniest seconds of dazzling clarity with cool sounding sonic murk. And credit to returning producer Chan VanGaalen for whipping up an ambience as dense and seductive as that sepia blizzard on the front sleeve. His protégés are writing good songs, but it’s not so much a production job as a sleight of hand trick – VanGaalan stops you from seeing Women’s full workings. There's nothing worse than a band you totally 'get', and VanGaalen is here to stop that happening.

So ‘Eyesore’, yeah? Maybe this is only to a relative degree, but it’s the song that steps out from the gloom and crackles and obscuring FX and shows Women to be… a band almost as cryptic as the one we thought they were. Only here they ditch those sepia tones for something altogether brighter. A chiming swarm of rusty-sounding guitars spiral round and round before giving way to a dry, booming, oddly energetic verse that ends when whoever may be singing yelps “turn against your will”. Then those chiming guitars are back, but not so rusty, not so slow, almost sparkling as they revolve into something more vivid, a full bodied folk rock riff, a sort of Eighties Peter Buck type thing. “Give out your number now!” goes the next yelp, and the riff twists and roars confidently, pirouetting out of the way as a vocal bit that sounds oddly like ‘Ghost Town’ screams out, hauntedly. “Give out your number now!” again, and then the whole thing collapses into an aquamarine shimmer of folk bliss, languid vocals slurring with passion and optimism and the promise of something better, even if “sweeeeeeeeeeetheart” is the only discernible word. And then that riff melts into it, everything goes major key, and for two minutes 'Eyesore' dissolves into the purest, sweetest jangle rock drizzle you ever did hear. It’s six and half minutes long, has no chorus, and I have no idea what it’s about, and you may disagree that it even particularly stands out as different to the rest of Public Strain, but to me it sounds like the start of something greater for a band touched with greatness from the off.