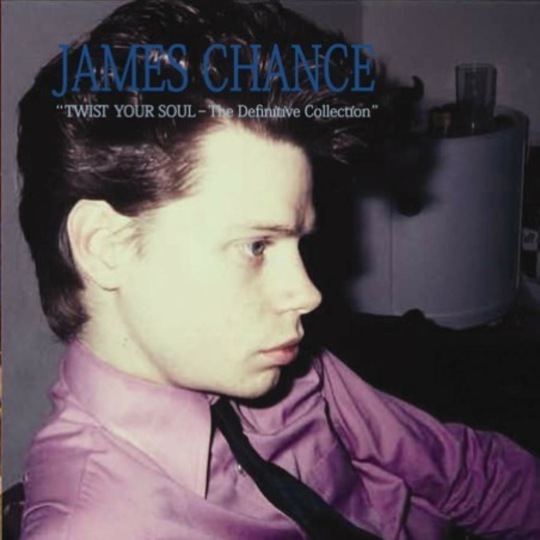 From brutally unrefined beginnings to later laser precision, James Chance managed to wield fearsome power with the churning suction of jazz-inflected and punk-fuelled funk. His band The Contortions were one of the four acts (along with Lydia Lunch, Mars and DNA) on Brian Eno's NO New York document of the 'no-wave' scene. Immediately set apart from the white noise being articulated by the others, their three contributions – here represented by the rippling 'I Can't Stand Myself' and ominous 'Jaded' – spliced aggressive bass with cluster keyboard chords, slide guitar scrapings and a James Brown-channelled vocal delivery. It wasn't long before these screaming and angular beginnings were jettisoned in favour of intricate saxophone trills, sparser bass lines and longer, more laid back songs. This mutation was announced via a name and group change – James White and the Blacks – although the abrasive atonality of the guitars remained as a nod to Chance's own free-jazz beginnings.

Twist Your Soul is a two disc retrospective with each disc curated by Chance himself, mainly drawn from the Contortions and Blacks periods in his musical journey. The first is studio recordings while the second is collated from his personal live archives. Selections from the only Contortions album, Buy, plus the NO New York tracks, seethe with the confrontational energy Chance tended to filter into encounters with the hipster crowds at CBGBs and Max's. Fast molten swathes of groove-crawling abandon are driven by Chance's staccato and ear-bleeding screech. Although not against the idea of musicianship, the Contortions were made up of non-musicians who attempted to imitate the rhythmic punch of funk while electrified on punk's fury.

However, the majority of the first disc is made up of material from Off White and Sax Maniac with the Blacks. Chance's svelte take on disco is naturally slower, bolder and teeming with brass. Arrangements are sensual and sparse, with saxophone solos rumbling and squealing over simple bass and double-stopped and scratchy guitar. Meanwhile, Chance's lead vocal role is more lyrical, restrained and resolves into a call and response bandleader approach. There's also a jazz swing track with Ternuna City and a far straighter funk jam as The Stigmatics to show Chance's grasp of the music that inspired and moved him long before new wave and disco dominated the airwaves.

The live disc of Contortions performances are of special interest as none of the cuts have been previously released. Despite the fuzzy quality, the alternately elegant and chaotic saxophone and relentless key stabs cut straight through decaying tape and the cruelty of time. In fact, it sounds utterly beguiling and not a little frightening. This gunky sheet of wailing penetrates in the most seductive and violent way, as best exemplified by the ecstatic female scream at the end of 'My Infatuation'. The later tracks are more refined, slinkier and though they retain some awesome blasts of skronk, are generally closer to traditional jazz-funk ideas. There is one cut with the Shibusashirazu Orchestra, which is a huge big band interpretation of Chance's strict musical decisions. The final two tracks are Les Contortions reintroducing these stark experiments to a modern audience.

With an iron fist James Chance absorbed the energy and unrepentant sexuality of his heroes while blending the attitude and anarchy of free jazz and punk. This fusion has been massively influential on bands like The Rapture and Radio 4, while they practically spearheaded a movement within the post-punk crowd, from Gang of Four's spiky missives to The Pop Group's afro-centric meanderings and Tuxedomoon's avant-garde jams. The strength of Chance's personality turned out to be vital to the output he crafted with his various backing bands and it is no more clear than on this collection. Twist Your Soul is the perfect overview of a wayward career which disregarded the punk disdain for disco and, as a result, crowbarred in a myriad of exhilarating ideas to be used and discarded by hordes of groups afterwards.