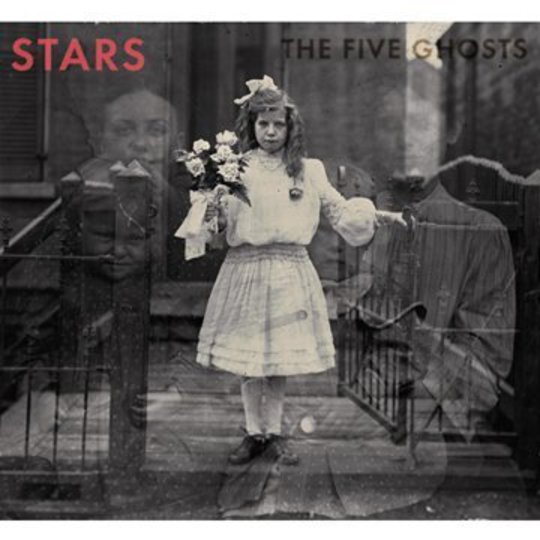 Well this is all wrong. In recent interviews Torquil Campbell has noted that The Five Ghosts, Stars' fifth album, was recorded under difficult personal circumstances for the all the band, not least the death of their frontman's actor father Douglas. So maybe, just maybe, the Montrealer's hearts weren't really in the making of this pallid offering.

Thing is, listening to these 11 songs, much of what has previously made Stars good is still present and correct. It’s obviously brimming with potentially poppy hooks and catchy tunes, yet none of them really work as well as they ought, limply gumming your fingers instead of taking a big chunk out of your soul.

Opener ‘Dead Hearts’ sees Campbell and Amy Millan duet a bit over some malnourished keys - him: “did you hear the closing window, did you hear the slamming door?”; her - “they moved forward and my heart died” – and it’s a bit watery but we’ve been here before and we’re expecting a crescendo to come along and give us a good whumping and it’ll all be great. But what follows is a wan crescendo knock off, some thin twinkles and droopy strings, a plop of guitar fuzz. It all sounds distant, like it's happening a few rooms away from the singers. Several songs later and ‘We Don’t Want Your Body’ should be an absolute stormer, a quick, lithe chart pastiche, with Millan adopting her best pop muppet squeak for the excellent chorus hook: “You sold me some cheap ecstasy, So you could have some sex with me, but I don't want your body”. And yet it’s so frail and tinny, next to not only any given 2010 radio song, but also Stars’ own earlier material. If it had half the density of ‘Take Me To The Riots’ or ‘The Beginning After the End’ it’d be the catchiest thing the band have ever done. As it is, it’s kind of good, but feels diluted.

The temptation is to blame the production, but here the honours are handled by Tom McFall, who did a perfectly fine job with Set Yourself on Fire, while the band themselves are old hands behind the desk and hardly ones to be led up the garden path.

Which moves the digit of recrimination back to Stars themselves: why does the pretty, almost Postal Service burble of ‘Wasted Daylight’ yield such a stiff, mannered chorus from Millan, when it should be her traditional early-on-the-record stormer, a la ‘The Night Stars Here’ or ‘Ageless Beauty’? Why is that arc of bleeps on the chorus of ‘The Passenger’ so crappy and deflated when, with a little polish, it’d totally make the song? Why are the likes of ‘The Last Song Ever Written’ or ‘Winter Bones’ so fundamentally lacking in any dynamics, simply plodding listlessly? And despite the odd fine flourish, why are the lyrical gloves affixed this time? At their best Stars are absurdly theatrical and monumentally depressing, and yet there’s nothing even remotely as jugular assaulting as ‘Your Ex-Lover is Dead’ or ‘Personal’ here. Indeed few of the songs really seem to be about romantic fallout at all. Has the genuinely downbeat mood in the Stars camp actually, perversely, made them rein in their miserablism? It’s bizarre to think that the band would have chosen to record such a flat, drizzly album as this; but then, flicking through Five Ghosts’ US reviews (it came out there a wee while back and got held up here by distribution ‘issues’) it seems to have been pretty divisive, so maybe there is something to 'get', maybe this sallow production job is somehow a bit of a Marmite affair.

In any case, it’s not a total catastrophe, but this could have been so sweet with a big, shiny production job, a better mix or just, y’know, some balls. As it is there are nice tunes, but they’re all in weak musical chassis... everything is so damn limp. ‘How Much More?’ is seriously the only track that feels spot on, buzzing synths diving under Millan’s voice at just the right moment as she forces her voice towards a note that’s really much too high for her. It’s about the most effort anybody visibly demonstrates on this thoroughly disappointing affair.