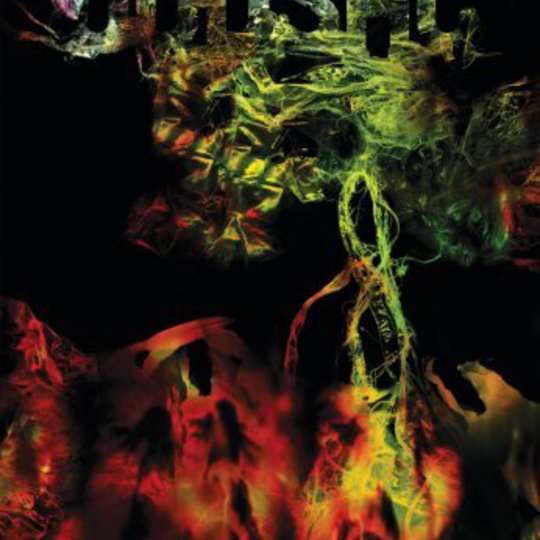 So should we suffer artists and their wilful indulgences? Should we indeed go against instinct and absorb visuals and music together, as one? Or should we bemoan the fact that there is no ODDSAC soundtrack and that the entire hour should include being bombarded with torrents of imagery and searing chunks of aural brimstone?

That's a lot of questions and initially, that's exactly what ODDSAC provokes. Four years in the making, this visual album is tied as much to director Danny Perez as Animal Collective. An exchange of ideas between the two parties, each element spiked with another dose of inspiration, led to the inseparable whole that is seared into the DVD. This Escher-like loop of work demands that the results be absorbed and enjoyed in sensory isolation. It can't be divided into bitesize chunks or thrown to the shuffle wolf who'd chew it to bits. Whether this works in its favour or to its detriment is up to you. The opening is suitably vivid and visceral. Swinging flames burn the screen in synchrony before introducing a female trapped inside a room with oozing black gel squeezing through the walls as she attempts to stem the flow. These visual themes reoccur in other scenes, paying lip service to a narrative which doesn't exist. Perhaps one failing here is that the audio accompaniment never reaffirms such visual devices – no familiar threads of melody repeat as you'd expect from a conceptual album – although aural shapes are returned to. For instance, waves of static and deafening torrents used as punctuation are used to greater or lesser degrees throughout.

The music begins as a vital, rhythmic pounding with Avey Tare and Panda Bear's exquisite harmonies ascending and swarming around each other. This by no means indicates any particular direction, just as the visual aspect refuses to abide by conventions. The album is strongly reminiscent of the aching, creaking sounds throughout Water Curses EP with the airy acoustic feel of Sung Tongs and Feels interjected into long passages while the jarring, scattershot noise, hideous animalistic samples and serene ambience threatens to take over.

If there is a singular thread running through ODDSAC, it's one of foreboding. One passage, which sees a crouching long haired figure washing a placenta-like grime from large, pitted eggs, is imbued with a horrifying staccato gulping sound, further feeding the unease of the scene. Between this and the next long section - a robed, pale figure crossing a dark lake in a boat, guided by burning torches - are some truly retina-smearing visuals. From garishly-attired performance artists to kaleidoscopic cocktails squirming in a throbbing white noise rhythm, they do not make for easy watching. By the time gentle rain is sashaying across stones and a lone man sets up a rudimentary drum kit, the screaming explosions torching your eyes and ears are gradually accepted with each flinch.

It's a relentless trip, a journey that is so far away from the warm cilia of Merriweather Post Pavillion as to truly test who's with this mischievous quintet to the bitter end. Perhaps the most successful synergy is also the one chapter that nods towards linear storytelling. This ingenious and simple tale of a campfire outing becoming nerve-churningly surreal and contains eclectic soundscapes and the most indelible imagery. It seems to pull all the alarmingly disparate threads together in a crescendo, from the flowing ichor to the building dread and intensity that has existed from the first note. The final minutes, in contrast, seem entirely inconsequential, merely repeating those jabs of cacophony within unfamiliar settings, a little fruitlessly.

ODDSAC was always going to be flawed, though with a project like this, what you see those flaws as being may depend on your perception. Personally, the experience is unparalleled. It's a frightening, surreal but compelling work that draws on the strengths of Animal Collective while also adding perspective to their failings, in this case allowing their sonic indulgences to dictate the direction. For them to ask us to allow them this, then, is brave and mostly results in a well-deserved triumph.