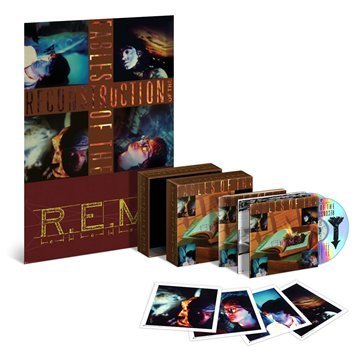 Birthed in a haunted old South, forged in a drab England, paranoid, sensual, nonsensical and true, Fables... was undeniably something of a diversion on the route to indie rock stardom. Yet for many fans this moon-touched night walk exceeds nigh on all the records that followed.»

25th anniversary edition of this classic rem album re-mastered with bonus content - 14 demo versions of full album and bonus tracks including the previously unreleased 'throw those trolls away'. rem's third full-length recording, 'fables of the reconstruction' delivers the purest distillation of the band's early sound. with the exception of the horn-laden, radio-friendly 'can't get there from here,' the songs form a connected soundscape. nearly transparent production highlights the glittering guitar arpeggios, active bass, and the disciplined, patterned drum lines, with organ and spare string arrangements adding texture to several pieces. and then there are the vocals: dense harmonies of voices calling out to each other, a rich humming and howling around michael stipe's central mumble. the album is best contemplated in its entirety, and the songs reward careful, repeated listening. this is a seminal alternative album, its material evocative, its ultimate meanings elusive.
description from www.roughtrade.com