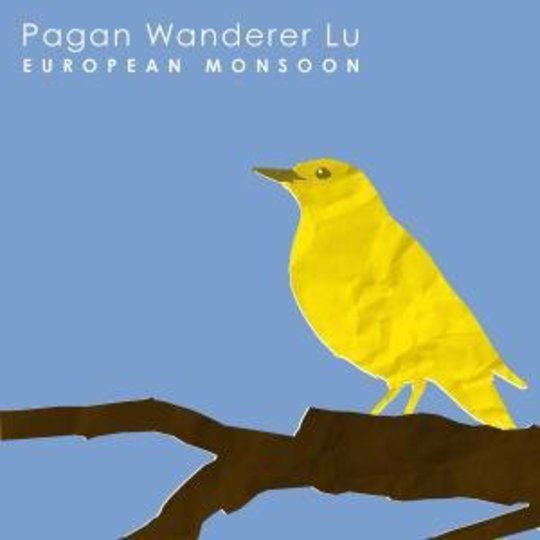 European Monsoon is Pagan Wanderer Lu's fifth album proper, if Wikipedia is to be believed. As with his past work, the words are one of the best things about it, endlessly quotable, and covering the whole human experience. Herein is an attempt to re-contextualise those lyrics into a series of quotes to direct the review.

“You can't make friends without technology” ('Chemicals Like You')

Andy Regan, the one and only member 'proper' of PWL, has upgraded himself for this album. Gone are the lo-fi sounds of previous, replaced with a kind of studio sheen. It may remove a certain amount of the inevitable charm that is associated with that kind of crackle'n fuzz indie pop, but with it has come a greater range of instrumentation, and a greater depth.

“When they going to make a machine that will write the songs for you?” (The Great British Public Become Self-Aware)

That's not to say that the obsession with technology has disappeared after the web fixated songs of Fight My Battles For Me (please refer to '2.0//The Bridge of Sighs'). The lyrics often use tech for lyrical effect. That phrase of woe - “Recipients mailbox is full” - is used for a melancholic rumination over a lost love, lulled over mournful guitars. Other songs mention megabytes, software, iTunes, epic fails etc.

“Immigrants are why it always rains on me” ('European Monsoon')

The humour has not disappeared either. Much of European Monsoon is outwardly sunny, layered-up indietronica, but the generally wry words keeps things feeling fun, without being tiresome. That's not to say this is a one-paced jaunt. Songs draw influence from anywhere; there are dark acoustic ballads, and an eight-minute wedge-shaped piece that departs from a hushed opening into rock guitars into a synth workout. Go to Myspace, and the Fiery Furnaces are listed as an influence – take their less esoteric corners away, and you have a similar feel to what PWL achieves on European Monsoon. Great pop music, in essence.

“How can I banish negative thoughts / When everything is so unbearably awful?” ('Banish Negative Thoughts')

Because at other times things are less happy. And yet that wryness remains – it would be easy to mistake PWL for a depressive, were it not for that palpably dry sense of humour that pervades, the tongue firmly placed in cheek. This is, after all, an album with a track called 'Crustaceans As Castanets.'

“If a tree falls in the forest / And there's no one there to see / Is it still a tree?” ('Chemicals Like You')

At other times PWL is more philosophical, raising issues that have intrigued scientists and thinkers for centuries. The latter quote comes from something which would fit onto any Grandaddy album, a laidback tune, which, like much of the Californian's work, takes a simple melody and throws more interesting things on top – synth burbles, violins etc.

“If you're unbaptised you'll burn in hell / But don't be scared, sweetheart” ('A Girl Named Aeroplane')

At others the lyrics are just sweetly loving. 'Westminster Quarters' adds new words (“Girl come home soon / I sure miss you”) to the saturnine melody of those leaden circle bells (all credit Woolf) that chime around Parliament. 'A Girl Named Aeroplane' starts off with gentle, looping acoustics and sampled zip sounds, before that beds down into choral layers and the bittersweet line quoted above.

As Regan declares above, Pagan Wanderer Lu has moved on, and made his best record yet. Layers of orchestration build his previously slight ditties into burlier things, greater things. Highlight of the album is the (brilliantly titled) 'God In His Wisdom And Compassion Spares The Mona Lisa From Being Engulfed By The Dying Sun', a classic Sixties style torch song, swirling violins and big drums, all concerned with the end of the world. Themes don't get bigger than that.

Pagan Wanderer Lu has grown from fey bedroom lo fi indie-type into a great songwriter. He may complain about not wanting to leave the house, about his lack of confidence (leading to his wish to have a 'Self-Doubt Gun' for those with a surfeit), but Andy Regan should have little justification for either. Witty, wise, interesting infectious music like European Monsoon doesn't come along that often. Not that that, or this review matters. As he says:

These songs should last forever.