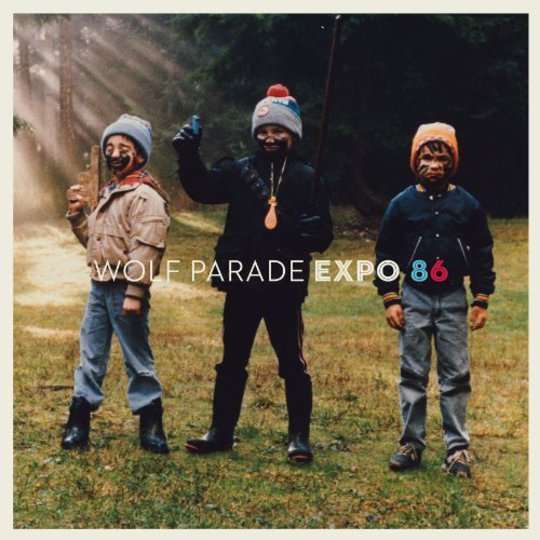 This just in: Spencer Krug, he of Sunset Rubdown, is collaborating with the Handsome Furs’ Dan Boeckner. Did someone say CANADIAN INDIE SUPERGROUP? Hell yes: somebody who used to be in Hot Hot Heat is on guitar... HOT DAMN. ‘Wolf Parade’, as they’re calling themselves, should be an experiment to remember.

Ha ha ha. The point is, though, that while Wolf Parade’s magnificent Apologies to the Queen Mary offered most of us our first real taste of Krug and Boeckner’s formidably idiosyncratic songwriting gifts, the intervening five years have seen but one other Wolf Parade album, 2008’s good-but-not-great At Mount Zoomer. This frankly leisurely state of affairs is rather put into perspective by the volume of releases issuing from the psychotically industrious Krug’s other projects (one does wonder if the little guy ever just kicks back with a beer); with Boeckner having whipped out a brace of Handsome Furs LPs in fairly short order, nobody’s really kidding themselves that either songwriter regards Wolf Parade as ‘the day job’. So in a sense they possibly deserve some sort of small prize for being the first band to actually achieve indie supergroup status retrospectively.

Which is a bit odd, but the thing is, it takes the pressure off. Even back in 2008, Wolf Parade felt so much more significant – and was at the very least so much more popular - than its related bands that At Mount Zoomer felt like a letdown after the three year wait. Since then Sunset Rubdown’s star in particular has ascended dramatically; it’s hard to imagine that many people listened to last year’s magnificent Dragonslayer and thought ‘oh REALLY Spencer, stop farting around with these brilliant melodies plus lyrics’.

So here comes Wolf Parade album number three, Expo 86, and this time its appearance feels more nice surprise than climax of an agonising wait. Indeed, first track ‘Cloud Shadow on the Mountain’ literally materialises out of nothing, no intro, no preamble, just Krug suddenly wandering up behind you and nervously jabbering “I was asleep in a hammock, I was dreaming that I was the web, I was a dreamcatcher hanging in the window of a minivan parked along the water’s edge”. He sounds like some autistic drifter barking out his inner monologue, while Arlen Thompson drily batters the shit out of a drum in the background. As what sounds like an entire different, equally raucous song starts playing at the same time, later sheared into by ominous yawns of guitar, you do remember how gloriously arty Wolf Parade can be. There’s a dissonant menace, an out-and-out weirdness here that Sunset Rubdown don’y have (even if the rapid-fire “oh oh oh oh, never be born as a scor-pi-an” coda could have come from any their albums).

Then it’s onto the Boeckner-sung ‘Palm Road’, which pretty swiftly preps you for Expo 86’s biggest weakness, namely that Krug’s co-pilot isn’t quite the man he used to be. Sure, one’s pulse picks up a couple of BPMs as Boeckner hollers about how “they turned the lights down low on Palm Road” as if this was A Really Bad Thing. But compare his vocal to the hernia-inducing levels of man passion he broke out on ‘Modern World’ or ‘This Heart’s on Fire’... it just lacks that vigour. Not that the dizzying scrabble of its ending isn’t wonderful, and not that he doesn’t knock a few zingers out elsewhere (‘Ghost Pressure’s affecting gothtronica is a case in point), and not that you should point too many fingers when musically the songs are co-writes. But the Boeckner-led bits just don’t quite stack up against the ominous metronomic chug of Krug’s ‘What Did My Lover Say? (It Always Had to Go This Way)’, or the hungrily lapping keyboards that glug around ‘In the Direction of the Moon’, shaking and probing and roaring and eventually condensing into a icy dance of light. And even then there’s little that seriously rivals ‘You Are a Runner and I Am My Father's Son’ or ‘Grounds for Divorce’ or, indeed, much off Dragonslayer.

But it’s still good. Expo 86 is good, it’s just not great. Wolf Parade, the 2010 model, are good, not great. Its two leaders – Krug especially – have written some good songs, but now most of their great songs go elsewhere. Still, y’know... fuck it. They don’t have to do this shit. Well, maybe the drummer and the guy who used to be in Hot Hot Heat do. But the point is, nobody really needs Wolf Parade these days and shorn of that expectation, it's hard not to heartily enjoy these occasional returns.