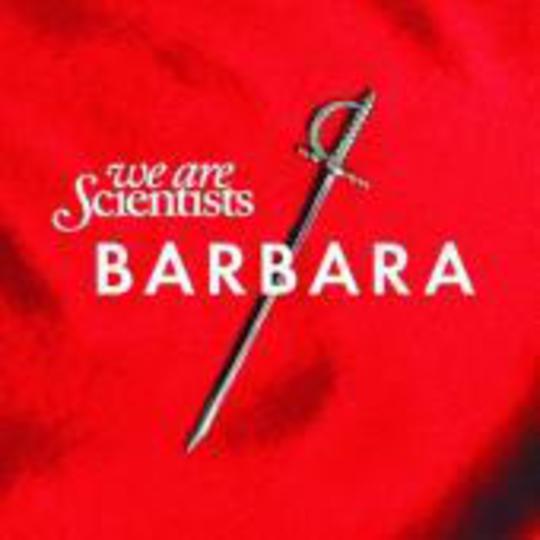 Rewind back to 2005, when the supposed second coming of Britpop was in full swing and the last thing anyone could have expected would be for a trio of Californians to gatecrash the party. Nevertheless, despite their origins, We Are Scientists found themselves clasped to the British bosom. Impossible to dislike and inoffensive in every way possible, they may have emerged from the land of the free but in many people's eyes they were one of us, rather than outsiders hopping on a short-lived revival bandwagon. Worryingly though, despite a clutch of excellent early singles, they soon became more renowned for their goofy videos and amusing interviews, and as a result, the novelty started to wear off, and fast.

What's perhaps most surprising is that they've actually made it as far as album number four. Whereas breakthrough set With Love And Squalor at least seemed to capture something of their energetic live shows, its follow-up (and predecessor to Barbara) Brain Thrust Mastery was a largely forgettable experience. While the band themselves - then a core duo of Keith Murray and Chris Cain - have never admitted as much, it reeked of a record overshadowed by record company interference whose ultimate aim was instant payback via radio playlisting and that all-important monster hit. That it never happened was hardly unexpected, although in many quarters it seemed to signal a premature death knell for We Are Scientists; as a credible musical force at any rate.

Earlier this year at the Camden Crawl, DiS bumped into Keith Murray and had a very open and honest conversation with him about his love of all things shoegaze, something in no way apparent when listening to his band's musical output. At the time we hadn't had the pleasure of hearing Barbara, but Murray assured us it was their best record yet, an album that will wipe away any sour memories left by their previous long player and their most experimental, ambitious set of recordings to date. That it isn't really any of the above probably won't come as much of a surprise, although in part it does compensate for the misdemeanours of Brain Thrust Mastery.

You see, listening to Barbara is like watching the England football team; expectations are high at the outset and true to form, things get off to a rousing start. However, after the halfway mark normality sets in, there's an alarming sense of underachievement and long before its conclusion, you're dismissing them as hapless failures.

Whilst that may seem a little harsh, let's consider the evidence. Recorded at the back end of last year following the band's unsurprising departure from EMI, not to mention their first set of recordings with new drummer Andy Burrows, once of Razorlight, Barbara is a more of a return to the initial surge of With Love And Squalor than the band themselves seem to recognise - or at least publicly admit. Opener 'Rules Don't Stop' and the poppy 'I Don't Bite' could quite easily have fitted in with the likes of 'Nobody Move, Nobody Get Hurt' or 'Cash Cow', to the point where it becomes apparent the pressureless environment of their second album seems to be a major catalyst here. There's also a burning ambition that rings out here, almost as if Cain and Murray themselves sense Barbara as their last real opportunity to make an impact. "If you want this, want it more!" screams 'Nice Guys', while the opulent anthemisms of 'Ambition' states dejectedly in its chorus "So long ambition, it's not a competition, I can't win any more". In a way it's hard not to feel sorry for them; We Are Scientists have always come across as genuinely amiable people but maybe this lack of a ruthless streak is at the heart of their downfall?

Sadly, Barbara descends into the refuse tip marked 'indie landfill' all too often, and even when the anti-Drums surge of 'Foreign Kicks' with its "Forget about the summer, it's over!" battle cry threatens to halt the monotony for three minutes or so, their valiant but lost cause has an air of futility to it. The bizarre thing about We Are Scientists is that despite the protestations at having never fulfilled their early promise on record, they remain an enthralling - if occasionally cabaret - prospect live, and for that reason one sincerely hopes that somehow this doesn't mark the end of the road.