Where Did The Night Fall 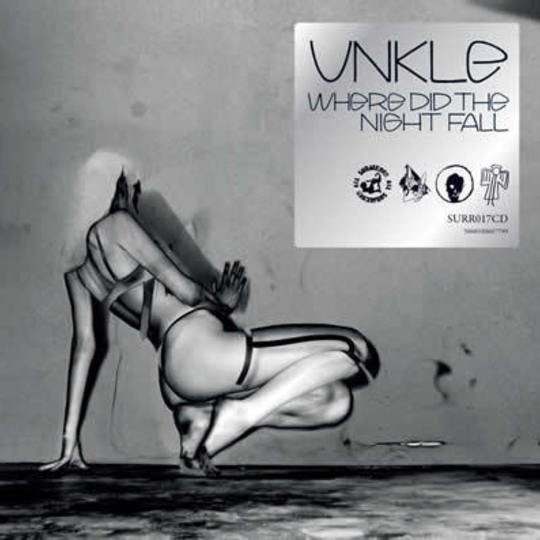 Time hasn't been too kind to James Lavelle's UNKLE project. Just flip the pretty, typically provocative album artwork of Whre Did the Night Fall around and glance at the state of Lavelle's pulling power. It goes without saying that UNKLE's success has depended as much on Lavelle's ability to attract buzz artist collaborators as it has on other things, such as, ooooh, actual music quality; looking at the limited list of collaborators present on the UNKLE project's fourth full album, it looks like Lavelle's schmoozey chat up lines may have become a little stale.

While the obvious lack of big name supporting cast may or may not reflect the declining relevance of Lavelle's overachieving (in sales terms) sideshow, it will narrow the record's appeal - potentially no bad thing. The problem with UNKLE, up to this point, has been paradoxical. Thanks to the willing nature of music's noble gentry – Thom Yorke, Josh Homme, Richard Ashcroft and Ian Brown have featured on past albums – even casual observers have had ears pricked by news of an UNKLE release. But for the discerning, Lavelle's records felt more cunningly plotted than genuinely inspired. It became the difference between UNKLE and other electronic projects that possessed more in the way of humble charm and actual burgeoning talent, and less in the way of celebrity cachet and PR savvy.

The good news for Where Did the Night Fall is that the supporting cast don't dominate the album this time around. Does this mean that finally we have an UNKLE album strong enough to stand on its own two feet without the need for Big Name Sponsorship? Well, yes and no.

Listening to ...Night Fall, Lavelle's instinct for rhythm, synthetic textures and melodies is immediately apparent. Opening track 'Nowhere' is a short 40 second burst of space-crawling futurism, as much shoegaze as it is progressive house. Its infinite portent is rather spoiled by the hip-hop-oriented tribal beats of Follow Me Down. But it's not hard to quickly immerse yourself in Rachel Williams' (of Sleepy Sun) Björkish yelps. As an introduction it summarises ...Night Fall. It hints at the hollow futurism and uneasy schizophrenia of previous album _Never Never Land_, but actually delivers graspable, proper songs. ...Night Fall's rhythm-heavy bias is maintained by 'Natural Selection's exquisite, borrowed-from-early-Charlatans bassline and tight beats. Excitement over the track's immediate groove is slightly diluted by meaningless lyrics that repeatedly echo that great imponderable line: “_Maybe I'll find / that one for me_” like it poses some kind of greater interest if it's said without relent.

Occasionally, ...Night Fall's lyrics do push patience. The illusive full house of Great Rhythms, Great Melodies and Great Lyrics isn't achieved here. But it's a fairly minor gripe. The immediacy of ...Night Fall's melodies and the satisfaction derived from its buttressing rhythms will generate just about enough pleasure for most. Like him or not, question past album quality, but it's hard to deny Lavelle's ability to transform the inaccessible into the radio-friendly. ...Night Fall isn't quite musical alchemy, but there are certainly moments on when magic occurs.

The record's improved level of consistency is equalled by (and perhaps a corollary of) its musical confidence. While this is an album that falls back on its electronic and casually hip-hop backbone, it isn't frightened to explore conventionally progressive rock territories. Both 'The Answer' and 'Falling Stars' hold more in common with Elbow and Doves than anything that would interest Lavelle's Mo' Wax label or trouble his DJ sets. It all helps keep this long, 14 track album moving at a pace. However, ultimately it works best when sticking to areas more in common with Lavelle's home turf. The majority of ...Night Fall would suit the intensified head-down atmospherics of a club. The Karen O-inspired 'Caged Bird' is dark and driving house; 'The Runaway' stalks its prey to the hypnosis of a thudding, lascivious tribalism. Evoking sexual salvation, 'Healing' offers some glimpses of light, while Mark Lanegan, the album's only genuine marquee name, ensures 'Another Night Out' closes ...Night Fall tenderly, its pallid surrender clothed in shades of black.

Where Did the Night Fall's aesthetic is one of inverted euphoria. Hands will be raised toward the heavens; but the blinking neon that separates the night reveals a space strewn with chemical mannequins, their dead-eyed expressions and deliberate movements driven neither by religion nor fear.