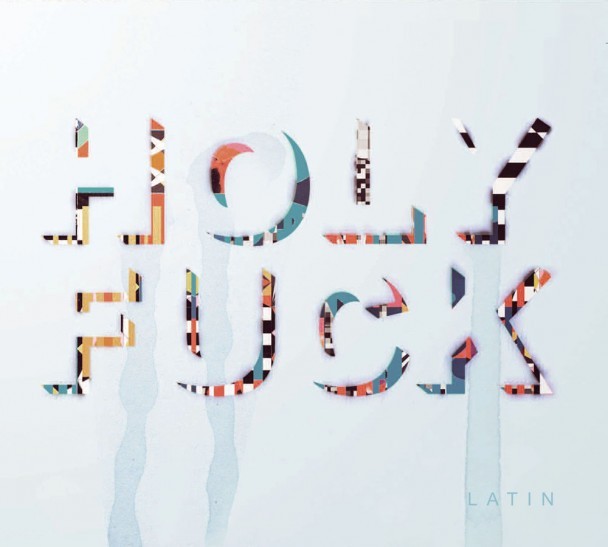 Holy Fuck's excellent third album Latin is not to be admired so much for its feral energy as moments of glowing, yes-my-liege stateliness. »

if you pre order 'latin', you will also receive a bonus cd 'ghost' with four extra tracks. if opposites really do attract, it makes perfect sense that holy fuck would chose a barn in rural ontario to record a series of dynamic electro-noise pop that compose their latest full-length release, titled 'latin'. where holy fuck in the past were a rotating cast of musicians, 'latin' showcases for the first time their consistent touring line up. drummer matt schulz and bass player matt mcquaid provide a complex rhythm foundation that at times feels like an invisible hand leading you through a dark hedge maze. perhaps an excessive feat for most, but this provides the ideal underpinning as brian borcherdt and graham walsh merge a twin effects / feedback tangle that is equal parts entrancing and inspiring. the band had an absurdly busy touring schedule in 2008 / 2009 and 'latin' undoubtedly benefited from the near nightly shows. there is an added dimension of song craft on the album - 'latin' brings noise and melody together with an uncanny sense of optimism - but at the same time holy fuck have not lost the chaotic and euphoric energy that they are known for. when it came time for holy fuck to record, songs were cut live off the floor during their brief downtime at home. delivered in trimesters, 'latin' was engineered by graham walsh and mixed by dave newfeld (broken social scene), d sardy (johnny cash, nin), eli janney (gvsb, wilco,), paul epworth (bloc party, primal scream) and holy fuck themselves. it's the follow up to 2007's simply titled lp. with high praise from peers, critics, big name endorsements and ascension on festival bills, holy fuck have the divine right to be profane. and with respected music luminaries thom yorke and lou reed passing on kind words about studio recordings and live performances, it's no wonder holy fuck have become sought after.
description from www.roughtrade.com