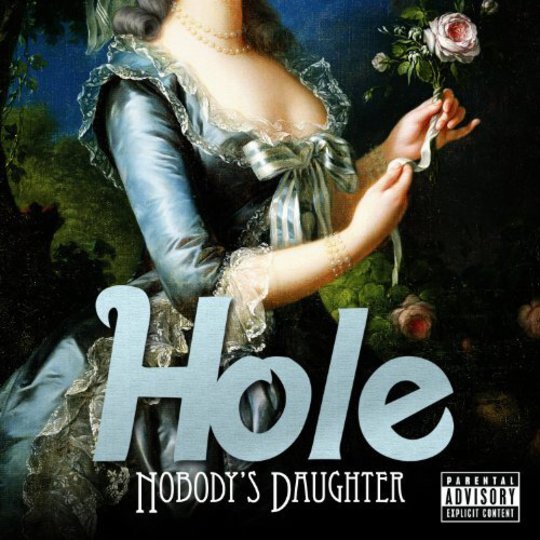 Fans of previous Hole albums Pretty On The Inside, Live Through This and Celebrity Skin will experience a near-universal first impression when firing up the band’s (such as it exists these days) decade-delayed fourth record, Nobody’s Daughter: to wit, Courtney’s voice still sounds a lot like Courtney’s voice. This is both a) a good thing - she's still in possession of one of the most singular snarls in rock - and b) far more of a surprise than it ideally should be.

Still, we can probably forgive ourselves if the title track evokes a disarming wave of nostalgia. Too often in recent years, it’s felt as though the Love we grew to, uh, love in the lengthening shadows of grunge’s agonising twilight has simply upped sticks and walked out on us, replaced instead by...well, it’s hard to say, exactly. Of course people change, and so they should - but the severity of the switch from crapped-out Converse to blagged Blahniks has been a mightily confusing one, especially for those of us left staring down at our own rainbow laces wondering whether any of it really meant anything in the first place.

So yes, it does come as something of a shock to discover that Love’s vocals have changed little (certainly relative to her appearance, media profile and apparent values) since those heady days of writing with Eric Erlandson. There’s maybe a shade more mahogany creak to the drawn-out, drawlier notes, and an inevitable leatheriness to the high end, but it’s as immediately recognisable as her Twitter feed is bewildering.

Nobody’s Daughter is almost comforting in this respect, and yet bubbling away beneath it all, something else is definitely Not Quite Right. A tendency towards over-production is the obvious culprit - right from the word go, Love’s trademark lacerating guitar sound is padded out by a flotilla of flappy acoustics. Even in the most authentically gnarled garage rock hands, this always has an unfortunate knack of making things sound far too much like The Cranberries for comfort, and the effect rears its head with maddening persistence in the early stages here.

Launch single ‘Skinny Little Bitch’ is perhaps the one first half exception, managing to avoid being snagging itself on its acoustic underwiring thanks to a combination of flaying delivery and weirdly juvenile name-calling. Where the effect is more profound, though, matters aren’t helped much by a smattering of modest solos from drafted guitarist Micko Larkin (neatly dispatched in a helicoptering Britpop sort of way though they are), and by the time we hit the mid-album slow burn of ‘Someone Else’s Bed’, it’s hard not to be yearning for something altogether gutsier from the erstwhile queen of raw(k).

That said, things do pick up pretty nicely from time to time - ‘Loser Dust’ doesn’t quite come over as smeared, breathless and disgusted as ‘She Walks On Me’ did on Live Through This, but makes a pretty decent stab at reclaiming such sordid highs. Hot on its heels, ‘How Dirty Girls Get Clean’ keeps the energy up and the spittle flying, and should’ve served as the panting, dishevelled end to proceedings rather than the overwrought howling of throwaway acoustic closer ‘Never Go Hungry’.

Lyrically, the record ebbs and flows with equal unpredictability, offering roughly as many intriguing insights as it does hoary Dear Diary platitudes and vague allusions to studied squalor. Picking through the lyrics raises an acute symptom of the trust issues long-term Love fans must now harbour, though - anything she could feasibly have confessed or revealed on this record was always going to be taken with an ocean-sized pinch of salt as things stand, so in the end it barely matters what the words to the chorus are.

And perhaps that’s the real overarching problem that Hole, in their current guise, are bound to face: we’ve effectively got to learn to trust them (well, Courtney) all over again before their merits can be properly assessed from a safe distance. Of course, this will be less keenly felt amongst the growing number of ambivalent voters on the matter - and true enough, on many levels it’s immediately obvious that Nobody’s Daughter is neither an awful record, nor a great one.

While die-hard naysayers would doubtless be happy if this was the last album released under the Hole name, the rest of us will inevitably turn an ear to pretty much anything they do - but it’ll take a lot more than one middling effort to win us back, and Nobody’s Daughter almost sounds like it acknowledges that at times. There are positive signs of rebirth to be found here, chief amongst them the fact that Love appears equally well-placed to tackle both rock anthems and more acoustic, stripped-down songwriting as she clatters towards middle age. This latest effort suggests that, with due care and attention, she’ll retain and develop the ability to tackle either just as effectively - and as long as she stops letting her rotating collaborators overdub both on the same track, we’ll keep looking forward (with mild trepidation) to the results.