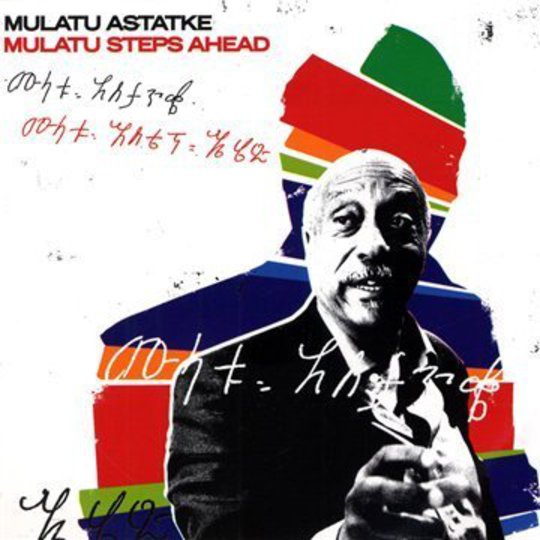 Mulatu Astatke is on the radar. Thanks to The Heliocentrics' releases on Stones Throw Records, Astatke is cool. If he was on World Circuit he wouldn’t be as cool. If Soundway or SoulJazz he would be less cool, but equally revered. If he was on Sublime Frequencies it’s possible that he might be a little cooler, likewise with Honest Jon’s… but it’s doubtful. Bottom-line, it’s difficult to imagine someone as cool.

Without sounding cynical, Astatke doesn't release on Stones Throw, he's on Strut. So does this detract from the coolness? Well kind of. However, Astatke, won’t be bothered by this measurement of ‘cool’. On Mulatu Steps Ahead there’s a different type of cool being explored, as in Cool, uppercase ‘C’. This is Cool as in Jazz does ‘Cool’. COOL, cool. Got it?

As usual, Astatke takes a back seat for most of the compositions. For much of it, like his work with the Heliocentrics, he is hidden under layers of instrumentals. He sits behind the piano only occasionally raising the mallets of his vibraphone into sight.

Much of Mulatu Steps Ahead sounds like he’s stepping towards sophistication. Stepping into refined ideas and potential conservatism. This record captures how the polar sonics of Ethiopian jazz, the raw drones and harsh aesthetics, can sit side by side its more decadent sounds. The pinnacle of these ideas arrives in closing track ‘Motherland’. A paean to tradition loaded with rich sounds. As warm as it is melancholic it’s a beautiful send off piece.

The tracks dance between these two concepts with incredible ease. Opening track ‘Radcliff’, is soft in it’s calm contemplation of ideas. From one idea to the next the ideas flow with relative ease. Acting as the record’s overture Astatke reserves himself leaving a trumpet solo as an introduction. Follow-up track ‘Green Africa’ offers this juxtaposition with abrasive low-end tenor sax drones. There’s a snappy folk melody, subtle rhythm changes and a vibrant atmosphere.

Strangely, it’s not the exoticism of the sound that’s the biggest draw to this record. Geographically, the record isn’t exclusively African. A mixture of reservation akin to Birth of Cool-era jazz and a focus on the forms, plus the heavy use of trumpet melodies results in the ultimate sound sharing ideology with the West. Maybe this shouldn’t be a surprising concept. The tracks were recorded in London and Massachusetts between 2007-2009. Many of the musicians on the record are of the jazz set rather than of roots and folk. The relatively slow tempo, which dominates much of the record, only furthers this idea.

Track ‘Ethio Blues’ – with ‘blues’ being at its most academic – uses a walking baseline blueprint for a track that swiftly diverges from any of the genre’s prerequisites. If anything, the song sits awkwardly on a record that for the most part, is very smooth.

Central to the record - its zenith, perhaps - is the eponymous ‘Mulatu’s Mood’. The deep percussion and Afro Beat provide the platform for Astatke to lose himself. It’s this high level of musicianship and wild complexity that makes this the album’s showpiece. From the hypnotic drums to the looping trumpets broken by snappy drum kicks. If there were any reason to spend two years in the studio, it would be to package this track safely in a mesmerising record. Unsurprisingly, this is the only track on the record that is entirely composed by Astatke. Something we are potentially deprived of elsewhere on the record.

As the West continues to explore Africa, to embellish its many cultures, Mulatu Steps Ahead acts as a proponent of liberalism and travelled sophistication. More please.