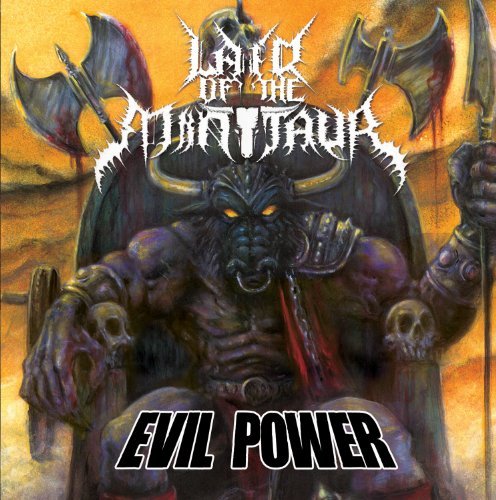 Lair of the Minotaur - Evil Power

It is, of course, perfectly possible for metal to make with the funny and still be great, and from time to time on Evil Power Lair Of The Minotaur hit a spot sweet enough to suggest they might make a legit banger of an album one day. »

emerging from the caustic burrows of chicago comes the monolith of metal known as lair of the minotaur: a sonic fuck you to the current trends and sub-genres of metal. carrying the torch for metals roots (celtic frost, slayer, motorhead) with a death breath of fresh air - spitting gas on the flames. the greek mythology inspired carnage continues on their fourth full length album 'evil power' - the first release on grind-house records, a new label started by steve rathbone and chris wozniak of lair of the minotaur, and josh diebel (formerly of alleysweeper records) and distributed worldwide by southern lord. the album is a metal powerhouse, laying waste to all in its path: heavy as the kraken and proudly displaying the bands heavy rock, metal and punk influences. recorded in the dead of winter at volume studios by sanford parker (russian circles, buried at sea), rathbone says: "if war metal battle master was the war, 'evil power' is the party after the bloody victory!. featuring new bassist nate olp (ex demiricous), guest backing vocals by general diabolical slaughter (usurper) and full metal mastering by scott hull (pig destroyer) all bringing mucho mayhem to the fold.
description from www.roughtrade.com