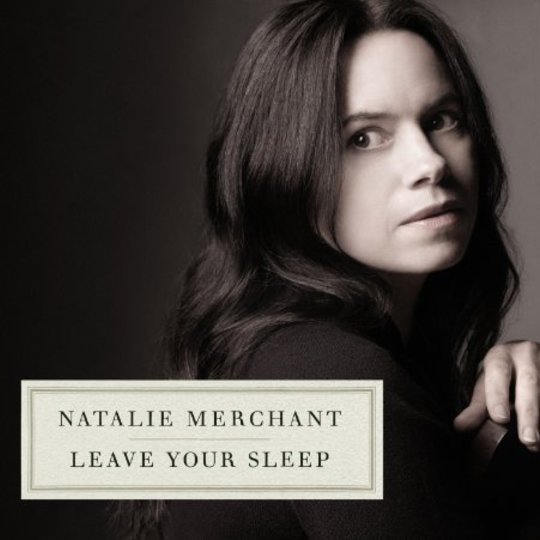 It’s tempting to think there is something up with America’s musical ladies. Last month Joanna Newsom releases a long-awaited triple album, this month Natalie Merchant releases, in all fairness, a probably not quite as awaited (though longer in gestation) double LP. What odds on Uffie’s forthcoming debut being a two-disc epic which finds the missing link between Miami bass and bluegrass? No? I’ll get my coat.

Not everyone has a multiple disc album in them though, so when two come along in quick succession it does grab the attention somewhat. If you don’t feel that 72 odd minutes can do justice to your artistic vision, it’s a fair bet you have something pretty grand in mind, and Leave Your Sleep is no exception to this.

Merchant refers to it as 'The most elaborate project I have ever completed or even imagined.' The 26 songs are inspired by poems selected from her favourite writers from the Victorian era to the present day. Among the names LYS draws from are Ogden Nash, Robert Louis Stevenson, Christina Rosetti, Edward Lear, Gerard Manley Hopkins and Robert Graves. To create music reflecting the words of those great men and women, Merchant rounded up an impressive cast of friends and ‘what-if?’ collaborators including the Wynton Marsalis Quartet, Medeski, Martin & Wood, The Chinese Music Ensemble of New York, The Klezmatics and members of the New York Philharmonic. To be blunt though, for all the great literary and musical figures involved, the result of this creative vision sounds more or less the same as the music Natalie Merchant has been making for her whole solo career. Only more boring.

The tracks on LYS range from orchestral folk (‘Nursery Ryhme of Innocence and Experience’), chamber pop (‘Equestrienne’) bluegrass (‘Calico Pie’), spiritual blues (‘Bleezer’s Ice Cream’), soft psych-pop (‘It Makes a Change’) and klezmer folk (‘The Dancing Bear’). The breadth of styles is admirable, and for the most part they are recreated faithfully, if without any real sparkle. Far too often though, this album defaults to sounding like the folky parts of the Titanic soundtrack which accompany all the patronizing scenes of the proles down below. They don’t have money, but they have heart and they can dance up a storm. Euugghhh. You know what I’m talking about. It’s the pan pipes I think, which push thoughts towards nightmarish visions of Celine Dion and Irish stew. Seriously, is there ever any excuse for pan pipes in music?

LYS throws up the odd standout like ‘maggie and milly and molly and may’ which manages to find an interesting melody to set alongside Merchant’s still beautiful voice, but for the most part it spends both of its discs meandering from average to awful. ‘Janitor’s Boy’ is piece of prohibition-era easy listening; ‘Griselda’ is jazz-flecked chamber pop. ‘The Land of Nod’ again sounds like it has been lifted from a film soundtrack, only this time coming from the part where the character has given up all hope, right before the event which sets up the conditions for a happy ending.

‘Vain and Careless’ is a stripped down folk-ballad; with more bloody pan pipes, which leads us ignominiously back to Titanic territory for ‘Crying, My Little One’. All of that working man’s spirit seems to have gone by this stage though, and to be honest I very much know the feeling. Just to pre-empt any cries of pre-meditated or institutional dislike of Natalie Merchant which may be being readied by this point in the review, I should point out that a) I am not an institution, and b) I quite like a lot of 10,000 Maniacs stuff. It’s also evident from LYS that Natalie Merchant’s voice sounds as good as it ever has done, it is however, almost completely wasted on these 26 tracks.