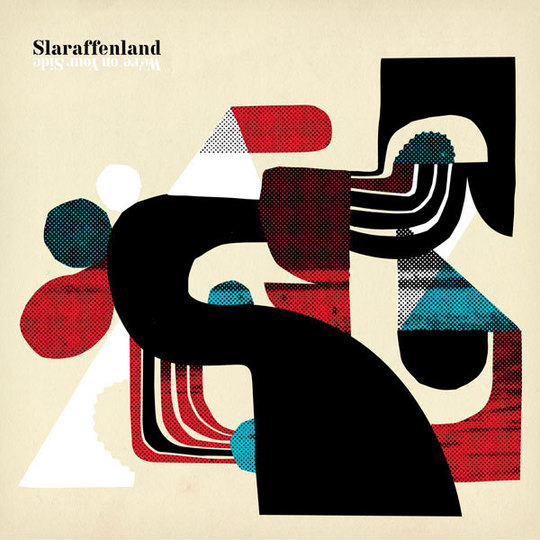 There's a great deal of high-quality music currently emanating from the Northern part of Jutland and surrounding islands, commonly known as Denmark. It may very well have always been that way, but certainly in recent times the region has abounded with an array of fantastic exports, of which much is not replicated elsewhere. It may be something to do with the support the Nordic governments afford their artists, and the importance placed on them. Whilst the expansion isn't perhaps quite rivalling the time of longboats and 'tings' in the 9th century, it is of a much more pleasant bent this time. Especially when it involves those like Slaraffenland, who release their third full-length studio record with We're On Your Side.

Harmony is unquestionably Slaraffenland's calling card and when done well, it's a beautiful thing – conjuring up all types of enchantment and a rich, flowing density of composition which the band regularly purvey. But it can be overused, lessening its impact. This is true of many devices, and certainly frequently used vocal harmonies are less likely to bore you like an extended guitar solo or outro. But they often leave a feeling of numb predictability. Yet it will always remain 'nice and inoffensive'. Not that what Slaraffenland create on these ten tracks is anywhere near nondescript, but a more variable approach to their chamber pop every now and then would be an enhancer, for sure.

This variation is found in 'Open Your Eyes', where the chorus is almost only harmony, it being left to flourish outside of the business found elsewhere on this record. It's a passage which is, aptly enough, near-revelatory. If you want a relatively crude and nationally defined reference point then think Efterklang, somewhere between Parades and Magic Chairs. Much in the vein of their fellow Danes, We're On Your Side is an album which deals with dynamics and the act of reeling you in and winding you up before eventually letting you unravel in your – and their – joyousness and gaiety, a tactic used several times, notably and most powerfully in 'Meet And Greet'.

The more engaging parts, however, take place beneath the choral vocals, with rhythmically complex sections forcing you to pick up whatever improvised percussive implement is to hand and tap it onto a nearby tea-cup, table or hardened surface, offering your own interpretation or pattern. 'Postcard' is one such case, with little more percussion than a rapid but dull-sounding thud providing the irregular heartbeat to the track's figurative bells and whistles. The shortest exhibition, the relative sparseness and woodwind ably add to the more frequent blowing of brass found nearly everywhere else, until the texture becomes so thick it's solid.

'Falling Out' is a slow wash of sound, serenity fighting a wavering background drone, all up against ever-present tides of familiar vocals. As well as being one of the more measured passages of play on the record's ten tracks, it's also the one which you feel should last longer, extending its arms around you for a welcoming hug, but, sadly, it recoils just as you move nose-to-nose and face-to-face with it. Song lengths aren't a notable issue but wanting more from the two more progressive works is, if not exactly frustrating, disappointing. But this is a small gripe.

For what is loosely a pop record – if an experimental one – We're On Your Side remains marginally inaccessible. That's maybe a harsh description: what I'm trying to say is that it takes an investment of more than a couple of listens and enough time to tune your ears to Slaraffenland's way of thinking and approach. It will not blow you away and, though well balanced, it's not a 'dipper' in that proceedings are constant and hand-picking the best selections does a disservice to the remainder, which complete a strong but not astounding record.