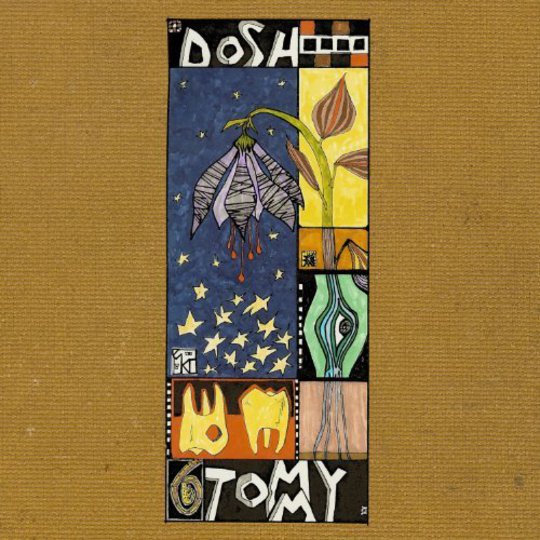 However you care to define it, anticon. seems to have an ethos that connects its roster together, some thread or blood bond that unites it all. And although most bands on the label can be connected in a couple of steps through their collaborations, they still end up sounding unique musically. Plot it out on a scatter diagram and you'd be able to draw a clear line of best fit, from Why? to cLOUDDEAD to Subtle to Odd Nosdam and so on.

Somewhere on that graph you'd find this, almost an anomaly. On Tommy, his fifth opus, Martin Dosh welds so many pieces together it's as good as beyond categorisation. The press release calls this post rock, but that doesn't come close. 'Call The Kettle' draws near that kind of labelling, but sounds more like The Earlies channelling Zappa, saxophones and synths repeating the same motif until it all fades out with a squalling guitar writhing over Zero 7-esque (in a good way) chilled beats. There are parts that are reminiscent of Max Tundra's instrumental passages, but that doesn't quite fit, cos things aren't as pop minded. There are parts that bring up Broken Social Scene's more relaxed spaces, but not regularly enough for the comparison to work. We can play a game of trading influences, but Dosh has taken so many different fragments of musical culture we'll be talking all day.

There are few lyrics here, and only on a few occasions are they anything over than fragmentary – like 'Yer Face': “Go and take your place / Fall down on your face.” Words for the sake of words, they appear low in the mix. 'Number 41', which features Andrew Bird, is one of the exceptions, a slower paced cowboy ballad, its pedal steel, banjo and piano backed by a thick layer of sampled static. It is one of the rarer, more conventionally formatted songs, but it still takes regular detours into higher planes. Dosh seems better when he doesn't have to worry about words, when there are fewer distractions.

The lyrics don't need that much attention, because these compositions (rather than songs) are so diverting, distracting. Here is a description of what happens in the first few minutes of opener 'Subtractions': a marimba and a drum beat lead us off, with a heavily distorted vocal sample. Layers of less distorted vocal "ba ba bas" start up, with a drum beat fading in, along with an overdrive guitar riff. The marimba come back in a little break, then some synthy burbling starts building. A thumb piano appears, and those layered vocals are back. The drums come back bigger, blasting. Then some saxophones emerge. Things loop round, shifting and altering, returning, fading, disappearing, returning, constantly changing... Tommy is not an album that lets your attention wander off it for more than a moment.

Density is all. The thing here is polyphony, of layers on carefully constructed layers. Tommy sounds like it has been carefully scored, but chances are Dosh created all this in his head. There are so many perfect moments. When the delicate piano part comes in on 'Nevermet'. The slight wibbling synth part on the intro of 'Town Mouse.' The beauty at the end of 'Country Road X' where the bass settles with a piano and the rattle of a background field recording. There are hundreds to be found here – go find your own. Depths appear as you listen more, and listen harder. It snares you, as you spy synchronicities, the way parts kick into another and hold all these compositions together. This record entraps you, making you want to replay it until it's worn down to binary zeroes and ones, its carefully constructed vignettes rubbed out. And you'd still be discovering hidden corners as it dissolved into static.