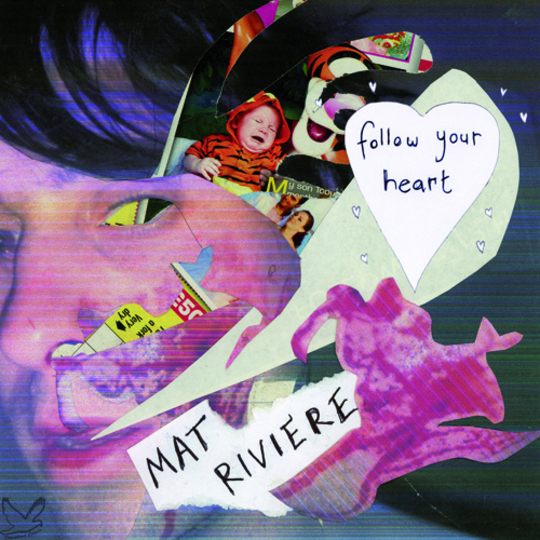 Mat Riviere’s Follow Your Heart is a spirited mixture of abrasive electronic(ish) soundscapes and slabs of melody not so much placed as chucked on top. It houses vocals which call to mind both The National and Neutral Milk Hotel in their baritone awkwardness; not only awkward within themselves, but defiantly angular to their surroundings too. Track six, ‘Slugs and the Dust’, is an immediate standout; the vocals are stripped back brutally compared to previous numbers, mumbling over an 8-bit beat with plaintive acoustic guitar and piano, sounding not dissimilar to Arab Strap actually. Lyrics like: “Baby you’re the drink and the dancing, felt just like the end of a bad dream, when I’d just turned 18 but you made the dust and the slugs at the door stream” pitch in an air of worn-in misanthropy that would make the erstwhile miserabilists from Falkirk proud.

If the names littering this review so far create a certain picture of the space that Follow Your Heart inhabits, just this once, curtail your desire to retain an open mind and welcome the preconceptions in. I don’t want to pigeonhole the guy; he is worth more than a lazy summation of his influences, but, he is clearly on good terms with his demons. Mat Riviere’s sound calls to mind all of the influential records you would expect a white man less than ecstatic with his life to own. What saves the record from being another piece of the landfill fucking garbage which seems to abound these days, is the inventive use of electronic beats and rhythms which jar against the obvious route for his songs to take.

The opener, and title track, has crisp beats and ugly synth drone with an ambiguous third element which sounds halfway between a mandolin and a guitar. The chorus ramps up the synth and introduces an almost chanting vocal. ‘Pause’ is even more synth-based and another high-point on the record. The Eighties pulse of the synth injects an urgency into the vocals which cuts through the strong melody nicely. ‘Godless Girl’ is a duet which is based around another agricultural synth, which like many other occasions seems to be actively railing against the other elements of the track, but the contradiction gives it enough energy not to buckle under the weight of the hollow, apathetic feeling the electronic parts create.

It’s a horrible thing to commit to type, but Mat Riviere’s biggest problem is not himself: if anything is going to hold him back it is the plethora of god-awful indie (whatever that word actually means now, it feels just about suitable to use in this context) bands/artists that are encroaching on his personal space. At first listen, Follow Your Heart sounds self-consciously awkward and contrived, the ungainly vocals seem calculated to offer a point of difference to the shitmunchers. It is only several spins later, once the cynicism can be laid to rest, that it becomes apparent Riviere is the real thing. Nothing on this record is engineered looking backwards to the chasing pack. He doesn’t use electronics to stand out from the crowd, he just uses them because it fits what he wants to express. Follow Your Heart doesn’t have the same clumsy magic as the best work of the weirdos it is influenced by, but it is at least fit to be mentioned in the same breath.