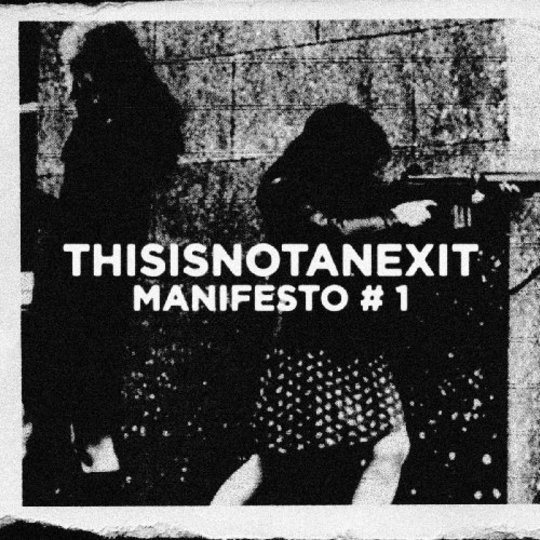 Perhaps it’s testament to my ignorance that this first compilation is the first time I’ve heard of Thisisnotanexit Records. Then again, the press release for Manifesto #1 does describe them as ‘the UK’s best kept secret’, so maybe it’s just been a matter of wrong place, wrong time. Either way, it feels like a case of better late than never, as there are some gems buried amongst its 14 tracks.

The turbo-charged, slightly gothic post-punk of Detachments opens in suitably raucous fashion, but it’s already a distant memory by the time Brain Machine’s aptly named and absolutely fantastic ‘Pulsations’ sets an early benchmark. It’s a lesson in how to do synth-driven restraint the right way, built from the sort of minimalist building blocks you might expect from a digital Steve Reich and completely unconcerned with any notion of haste. Pounding along at an unrelenting but largely beatless chug, its simplistic but deeply groove-oriented structure is a little reminiscent of the spaced-out techno of TVO’s excellent Starry Wisdom EP. The same sort of ideas surface a few tracks later in the vapour trails that stretch across Naum Gabo’s ‘Like Crystalline’. But there’s even deeper history buried here, evoking memories of Kraftwerk and Tangerine Dream’s earliest experiments in hypnotic repetition and circular ambience.

In its ear for unusual electronic sounds, the closest comparison to the sort of material Thisisnotanexit seems largely concerned with is probably the output of the Highpoint Lowlife or Italians Do It Better labels. The latter fits a little better, as the sumptuous decadence and distinctly Eurocentric bent of many artists on here would sit quite comfortably alongside people like Desire and Chromatics. Panda City Band’s ‘Wet Journey’ treads the same delicate line between electronic and acoustic to similar effect, all echo-drenched melodic fragments and trancelike motion. Similarly, Pink Stallone’s ‘Vlad’ has more than a little Glass Candy in its genetic makeup, but heads off in its own pretty unique direction, burying addictive funk guitars and a slo-mo house groove under layers of synth wash and a vacant female vocal.

Weird Tapes (a pseudonym of the much-blogged Memory Tapes) turns in another highlight with ‘The Walking Dead’, but substitutes the vague impressionism of his other incarnation for a more direct approach. Slightly skewed hip-hop programming and a grin-inducing, childlike synth line lend it surprising heft, but it’s the track’s constantly shapeshifting nature that marks it out, landing miles from the self-consciously thoughtful realms of his day job.

In the sense that most of the material on Manifesto #1 rides off its insistent pulse, the entirety of Thisisnotanexit’s roster operates in a space that’s conscious of dance music’s influence. But it’s dance refracted through a host of prisms, each leaving a slightly different trace on the final result. As with most label compilations, in its entirety it feels a little disjointed, and the quality of material does vary quite considerably. Nonetheless, there’s more than enough of interest on here to merit keeping a close eye on the label in future.