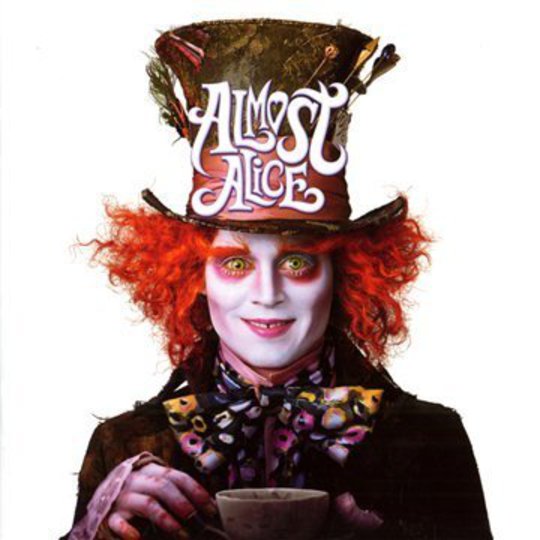 Would Lewis Carroll have been an Avril Lavigne fan? Would the very concept of a Mark Hoppus and Pete Wentz collaboration have had his heart racing? Would Owl City or the All-American Rejects have ticked any boxes for him? Probably not. Then again, how many of the artists featured on Almost Alice was Tim Burton really desperate to include on his latest film’s accompanying rock compilation? One or two maybe – I suspect he’s a Robert Smith fan, but I doubt he had any Plain White T’s albums playing on the set of Alice In Wonderland.

So how did we get from slightly-overrated-gothic-visionary-animator-director reinterprets impeccably-surreal-Victorian-children’s-book to Almost Alice? Well, the process seems to have begun with some bloke in a suit deciding that Tim Burton was down with the rock kids. Which raised the question of which bands are down with the rock kids and, specifically, which ones are capable of bringing in the megabucks? From which a list was drawn up, and everyone included on it was sent an e-mail saying something like 'Could you write us a song about Alice In Wonderland when you’ve got a spare half hour?'

And many of them did, giving us songs as imaginative as ‘White Rabbit’, ‘Fell Down A Hole’, ‘Tea Party’, ‘Her Name Is Alice’ and Ms. Lavigne’s contribution, ‘Alice (Underground)’. Because you know, it’s about Alice In Wonderland and that.

In all fairness, ‘Alice (Underground)’ isn’t a complete disaster. Lavigne wails like Alanis Morissette over a trundling military rhythm, and clunky piano, intimately thickened with reverb. Motion City Soundtrack’s effort is also fairly likable, with an indiepop eloquence that brings out elements of Bishop Allen instead of the usual pseudo-punk pomposity. But that’s not enough for these tracks to justify their place on this compilation.

It would be fair then, to expect Robert Smith to be man that legitimises this compilation’s role in the narrative of Alice In Wonderland. However, his version of ‘Very Good Advice’ from the original Disney film is terribly muddled; all misjudged ambience and uncomfortable bleeps and whistles.

Absurdly, it falls to Franz Ferdinand to really capture the spirit of Lewis Carroll, without relying on clichés or populist conceptions about the music they make. ‘The Lobster Quadrille’ is an intricate acoustic nursery rhyme, full of dangling hooks and looped patterns. The squelchy brass keeping time adds to the underlying danger that it is Burton’s job to recreate on-screen. Using lyrics from a Carroll poem (included in the original edition of Alice’s Adventures In Wonderland) undoubtedly helps Kapranos and co. recreate the perilous mood of the novel – but at least they go some way towards capturing the atmosphere of the film, instead of conceitedly boosting its audience.

The same cannot be said of 3OH!3 and Neon Hitch’s ‘Follow Me Down’ – a daft, bland R&B/dance crossover, that may regrettably emerge as the legacy of Lady Gaga. ‘Her Name Is Alice’ by Shinedown similarly reeks, with its failed attempt at creating a sense of menace and an annoyingly fist-pounding chorus that combine to create the uncanny sound of Spinal Tap down the rabbit-hole.

The justification for this compilation really starts to wear thin on Mark Hoppus and Pete Wentz’s chilled out, sample-laden collaboration. The verses are anonymous, the chorus utterly forgettable, and unlike either of the bands the pair are best known for, it’s not even a bit fun. Owl City are similarly included, it would appear, for the commercial weight their name carries these days – ‘The Technicolor Phase’ will, as ever, make American teenage girls squeal and give Postal Service fans something to moan about, with lyrics like “If you cut me I suppose I would bleed the colours of the evening stars”. What this goes to show though, is that there is clearly an audience for Almost Alice, given the artists named on its sleeve, and its association with the guy who made Edward Scissorhands. As a creative artefact however, its merits are limited, and does little, if anything, to contribute to Tim Burton’s creative vision.