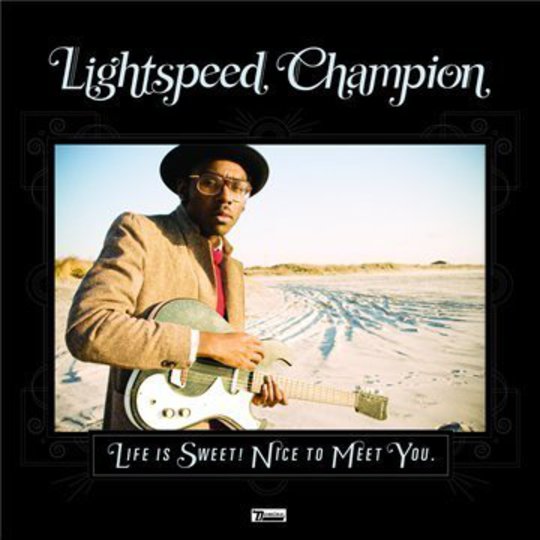 Based on Dev Hynes’ ongoing musical evolution and oft-cited pop culture obsessions, Lightspeed Champion’s second long-player could plausibly have arrived wearing any number of guises: a navel-gazing collection of sweetly melancholic, unutterably twee bedroom ballads; a riff-bolstered slab of tuneful grunge-lite that (to Hynes’ eternal chagrin) would consistently inspire the most tongue-in-cheek mosh pits in history; or possibly even a string-laden wonk-funk freakout that saw our hero throwing down his beloved axe to beatbox and body-pop across the stage - without a flutter of irony, of course - when the follow-up live shows rolled into town.

The fact that Life Is Sweet! Nice To Meet You is simultaneously all and yet none of these things is both a plus and a minus. Sprawling, abstruse and somewhat labyrinthine on the first couple of playthroughs, it’s by no means as neatly compartmentalised a record as you might want it to be at the moment of diving in - notably less so than Lightspeed’s debut offering, 2008’s Falling Off The Lavender Bridge. It doesn’t spit obvious singles at you the way that record did, fencing them off with dramatically hushed ballads and the odd comedy title.

Where Life Is Sweet! does snatch the Lavender Bridge baton and run for dear life are the majestic, slow-shifting prog numbers that popped up once or twice on the earlier record. This new one is essentially scaffolded by them - it's just that Hynes has honed his craft to the point where they no longer need to be nine minutes long in order for him to fully flex his considerable imaginative muscle. The vast majority of the 13 proper tracks here clock in at 3.30-4.30, making the record feel at once weighty and yet not overly grandiose; a dense body of work that presents itself in satisfying yet digestible chunks.

Opener ‘Dead Head Blues’ sets the tone reasonably well; the ominous throb of a muted power chord is soon overlaid with sustain-drenched stage piano as Hynes sighs a tremulous, gradually souring lullaby involving dreams of a future in the Midwest turning sour, Hynes not trying too hard to sound genuine when he says “I know you’re happy, and that’s lovely / It won’t keep me complete.” When it all inevitably collapses in on itself, the middle-eight is a glorious Weezer homage, complete with squalling feedback and a closing bridge that threatens to be audible only to dogs.

Launch single ‘Marlene’ is next up, and herein we get the first of Lightspeed’s forays into thorny funk territory. Fusing the spastic, girder-like clang of Icky-Thump-era White Stripes with an orchestral Motown peacock strut and a skyscraping swoon of a chorus, it’s a multi-headed hydra of a song whose very existence makes a mockery of Hynes’ own lyrical pleas to “stop being cool”.

Boosting the tracklisting to 15, a couple of ‘Intermissions’ are dropped in here and there. The first sounds weirdly like cutscene music from the Golden Axe video games, while the second is merely a handful of percussive beats shaken around in an old biscuit tin, but they’re far from unwelcome. In fact, as Life Is Sweet! veers so frequently from densely orchestrated to intimately raw and back again - often within the same tune - these little throwaway breaks tend to work as conveniently placed little palate cleansers. If you were to level the accusation of an obvious single at this record, you’d probably be relying on choppy mid-album Britpop anthem Madame Van Damme, on which Hynes plays the dangerously potent Coxon-Albarn hybrid: skewed, squinting guitar hooks ricochet around the mid-verse ‘oh-ohs’ before setting up the straight-for-the-jugular chorus refrain of “Kill me, baby won’t you kill me?”

The album’s true high points are to be found elsewhere though, especially in the echoing, overtly theatrical Bowie-meets-Kate Bush visitations that haunt showstopping final act ensemble number ‘Middle Of The Dark’. The faintly ominous canter of 'Sweetheart' is also particularly rewarding, coming across like a drunken, post-duel knees-up at a dusty Wild West cabaret club.

Life Is Sweet! is not the gambolling, instantly brought-to-heel puppy of a record that Lavender Bridge was, and if that’s what you liked most about the first album, then you’ll still prefer it to this one. What this second Lightspeed LP reveals is a craftsman deliberately and painstakingly raising his songwriting game one chord change at a time. Here, Hynes shows he’s digging in for the marathon rather than opting for the quick sprint (as many doubtlessly felt he’d opted for with the thrilling but futureless Test Icicles). Life Is Sweet is the sound of an artist meticulously applying his blossoming maturity through multiform song structures and cloudier, less transparent lyrics. The impressive - if somewhat chewy - result may well feel more dogged than puppyish on this outing, but I for one am happy to take that as a declaration of real intent from one of the UK’s most consistently intriguing current young songwriters. Onwards and ever upwards, Sir Dev.